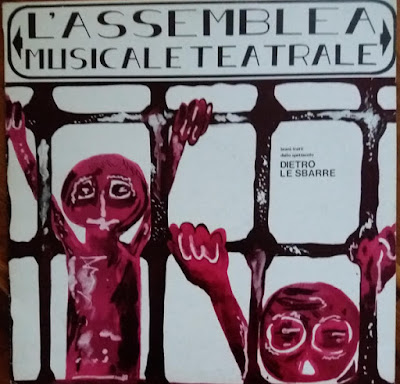 L'Assemblea Musicale Teatrale (The Assembly of Musical Theatre) formed in Genoa, Italy at the beginning of 1975, after the dissolution of progressive rock group La Famiglia degli Ortega. The band, with original members Bruno Biggi, Alberto Canepa and Gianni Martini, came together with the intention of creating performances that combine Italian rock with a variety of theatrical and experimental musical components, with a strong focus on social and political lyrical themes, especially those that were important to student movement groups in the 70's. Their first shows were censored due to explicitly criticizing personalities in Genoa. The nine members involved in the group at different points released three very different albums throughout their four years of activity until their dissolution in 1979, but the project has since regrouped under vocalist Giampiero Alloisio, leading to a comeback release in 2002.

Of particular interest to progressive rock fans (and especially RPI enthusiasts) is their debut `Dietro le Sbarre' (Behind Bars). A suffocating mood, daring experimentation, intricate instrumental arrangements, classical charm, weary passionate vocals and avant-garde strangeness can all be found on this fascinating work, comparable to the more daring and darker Italian progressive albums of the 70's. Follow up album `Marilyn' (1977) appears in more of a folk singer/songwriter style, while `Il Sogno di Alice' (The Dreams of Alice) from 1979 is something a return to grander works with piano and strings, but as a mix of commercial, folk and adult pop/rock with slight proggy leanings.

L'Assemblea Musicale Teatrale (The Assembly of Musical Theatre) had a brief moment of activity in the 70's, resulting in three albums between 1976 and 1979, including this magical debut `Dietro le Sbarre' (Behind The Bars). It moves around from unnerving, suffocating avant-garde strangeness, pleasing psych folk ballads, to daring Italian progressive experimentation. While the political/social lyrical aspects may be lost on many listeners, it's still very easy to appreciate the talent, imagination and skill of the musicians involved here. Lead vocalist Giampiero Alloisio has a raspy and charismatic tone that brings the right amount of grit and heart at all the appropriate moments. Although the album is frequently acoustic based, it has these spasmodic bursts of electronic flourishes and electric energy, making it a very unique album for RPI collectors, but one they will surely appreciate.
The disorientating mood of the album is present right from the opener. Eerie wavering electronics, hazy strummed acoustic guitar, weary male vocals, and hypnotic percussion grows in tension throughout. By comparison `Il Quadro Antico' is a much warmer piece with gentle classical guitar and stirring chorus backed to placid washes of synths, before a confident and forceful diversion in the middle and nimble acoustic soloing in the finale. It's a lovely respite before the schizophrenic `La Pazzia', full of tempo changes back and forth, jazzy licks, ranting vocals, nightmare synths and hallucinatory ambient effects. There's a real wildness and unpredictability to this one, and the dark string section that ends the piece raises the drama even more. It's then lovely to come down with the placid `Alle Donne Brutte', where the floating blissful synths remind me so much of `Il Rituale Notturno' from the self titled Corte Dei Miracoli album! It's a gentle ballad with flute, recorder, acoustic guitar and low-key electric guitar fills topped off with a beautiful romantic vocal. Then we're back to sinister murky synths, loopy frantic guitar tension, maddening percussion and a strident and darkly pleading vocal for `La Violenza' that oddly turns slightly more upbeat in the chorus. Sadly there's not much of an ending, rather an abrupt fade out/stop that kills the build the track was aiming for.

Side B of the original vinyl opens with the longest piece on the album, the classical acoustic folk of `Ninna Nanna...', and after being a little let down by it being the most straight-forward song, there's no denying it's somewhat sorrowful and fragile beauty, and just wait for the last minute grand ending with a whirling synth run! The more upbeat `L'Impotente' sounds like a mix of RPI with an early Pink Floyd track, it's got that same dreamy stoned slide guitar David Gilmour sound weaving throughout the whole piece, and it's a lovely easy going catchy number that will get your foot tapping! However the cheery country popper `E Tu Che Ne...' is far too grating and cheesy for me, and sadly it sounds totally out of place here, really intruding on the album. It sounds the most like the material on their next album, and the female vocalist used here, Lilli Ladeluca, would have more of a role on that follow up. Then we're back where we should be with the wilting and downbeat dark folk of `Donna', with some very unsettling washes of ghostly synths and suitably creaky vocals from Giampiero. Oddly, album closer `La Nostra Storia' is all tribal/percussion heavy/world music with male//female singers and chanted vocals that also sounds totally inappropriate here. If this one and `E Tu...' had been left off the album, or saved for the follow-up, we'd still have a beautifully flowing 35 odd minute album, which is not an unusual running time for a 70's Italian progressive album.

With the following album `Marilyn' heading in more of a folk/protest/singer-songwriter direction, and the third album from 1979 `Il Sogno di Alice' being an adult rock but sophisticated commercial release, this is the main release from the band to treasure for progressive rock fans, and especially RPI enthusiasts. It can be placed comfortably along numerous other Italian prog works, the majority of the pieces here, excluding the above mentioned couple, would be welcome on any RPI album, and it gets better and more surprising with every listen. Some may find the mix of styles and moods a little distracting and inconsistent, but that's just what makes it such a fascinating work. It's one of the reasons why the RPI artists stand out so much in the first place, and makes `Dietro le Sbarre' well worth discovering.
Posted by Zen Archer at 3:05:00 PM