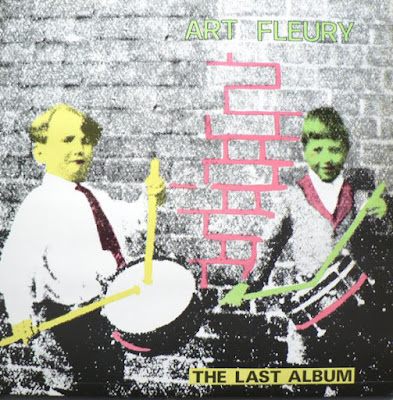 Art Fleruy's second album takes a step away from the cacophony of tape-loops and radio frequencies of 'I Luoghi del Potere' following a more straight forward song-orientated formate. They still grasp at the experimental nature of their first album, but compact these ideas into New Wave influenced tunes. For this listener it was a bit o' a disappointment after a love glazed affair with their first album, to watch this radical band side way into straight forward New Wave - clearly featured on their '83 album 'New Performer'. While the first album gives hints towards Nurse With Wound, 'The Last Album' finds closer quarters with the industrial chaps Cabaret Voltaire. Overall the album is a little patchy in what I deem to be solid material, tracks like 'Nonsense October Tango' show the more progressive side of the album. Overall Side B is the more more interesting of the two deteriorating into tasteful deconstructions, while flaunting the innocence of Aksak Maboul's first backed up by the rhythmic entities of post-punk. Side A finds experimental tendencies libidinously coupling with poppy ostentation's which feel at times a little disposable (depending on what sort of mood I'm in).
For those who enjoyed their first certainly check this one out. For avant people unfamiliar with the band dive straight into their first. But for those fringe avant listener this could be an alluring starting point, offering a more sedated outlook on the bands musical endeavors. A good rounded album.