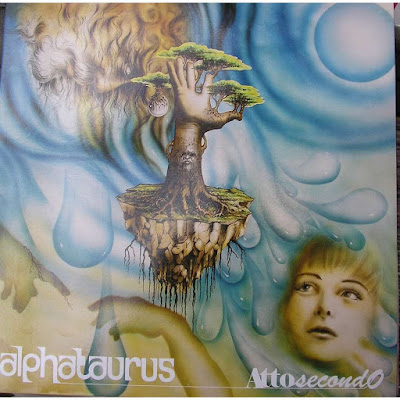 Almost fifty years ago, a little-known band called Alphataurus released their self-titled debut to the world. Although they are still arguably little-known (largely due to the fact that they called it quits after an half and a half), "Alphataurus" is one of the wonderful gems of the Italian progressive rock scene. Alphataurus essentially perfected their sound on their first try, and with that in mind, it's an even bigger shame that they split up so soon after. While it's conceivable Alphataurus would have come out with several more great albums throughout the 70's, the band is now making up for lost time. Just earlier this year, they released "Live in Bloom", a remarkable and charismatic concert recording taken from their Progvention appearance. If that wasn't enough to indicate Alphataurus are back on their feet, they have done something that quite a few RPI fans had hoped for ages. Keeping in mind that the work-in-progress "Dietro l'Uragano" isn't considered a proper album to begin with, "Alphataurus" finally has a successor worthy of its name. "AttosecondO" may not add much upon the sound of the original, but for a scene that's still largely trying to recreate the magic that the original Italian progressive legends such as they kindled, Alphataurus sound as strong as ever.

Stylewise, it's as if Alphataurus have been frozen in time. Although the production standard enjoys the conveniences of modern technology and a lifetime of experience, Alphataurus are in essence the band they were when they left the public ear decades ago. While the stagnation of style would normally mean artistic death for a band, Alphataurus sound ear and enthusiastic. The music is a feast of vintage synths, quirky time signatures and phonic exploitation of the rich Italian language. Although the debut sounded more experimental in its context, "AttosecondO" sounds just as thoughtful. Claudio Falcone's vocals add a wonderful touch to the fleshy arrangements. Although not as theatrical a performance as some of the other Italian prog coming out these days, he has a powerful resonance to his voice. As is the case for most Italian prog, Anglophones will be left in the dark as far as lyrics go, although the emotion is certainly there.

Although Alphataurus enjoy a well-rounded sound and one of the most professional mixes I've heard in progressive rock this year, "AttosecondO" is most definitely a keyboard-oriented album. Considering that the band sports two keyboardists (Andre Guizzetti and Pietro Pellegrini) with a third on call (guitarist Guido Wassermann), this shouldn't be too much of a surprise. Alphataurus still manages to sound rich and even heavy by RPI standards however, the synth and organ textures they choose are always a joy to hear. The organs tend to add texture to the rhythm and understated guitar riffs, whereas the moog-ish synths play some bright lead work. Although the dramatic, symphonic RPI staple sound is ubiquitous throughout "AttosecondO", Alphataurus use this well-worn formula to traverse an impressive span of emotional ground. "Progressiva-Mente" kicks off the album on an upbeat, enthusiastic note, but by the time "Claudette" rolls around, Alphataurus have fallen to a melancholic depth, and though I cannot understand the Italian lyrics, the mood and mournful tone of the voice sounds like the speaker has lost someone dear to them.

Alphataurus tend to stick to the predetermined instruments and tricks of Italian prog, and they're able to do this while keeping the emotions fresh and evocative. It builds proudly upon an already-excellent Italian progressive tradition, and while it may never have the same far- reaching influence within the scene as the eponymous debut, "AttosecondO" still rates as one of the strongest RPI records to come out in a while. Their age regardless, Alphataurus have proven that their sound- and by extension, the sound of Italian progressive rock- is timeless, and that is quite an accomplishment in of itself.

If you like Alphataurus' first album (or even their 2nd incomplete album released by Mellow) and have concerns about this one (because it is in the modern times) as to whether or not it's worth buying: please wipe those concerns away as there's really no reason to not get this album!!!
Posted by Zen Archer at 6:40:00 AM