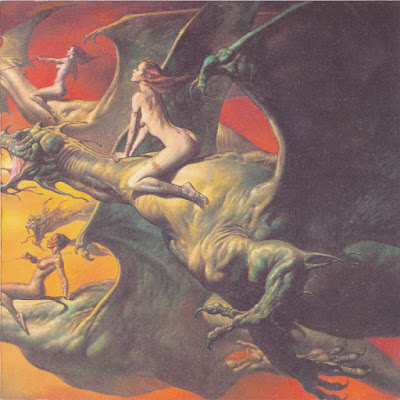 First of all let me start by saying that I think Alphataurus first effort was a clearcut masterpiece, - which incidentally also was the predominant reason for me acquiring this album. (This could actually ruin the whole thing for you, if you dive into this record thinking it will be a serving of the same ridiculously multi flavoured exotic meal, as the last time you visited this restaurant.) At first I was a bit dissapointed with the shift in style, the beautiful and soaring vocals of Michele Bavaro are gone, and the vocals are instead done by drummer Giorgio Santanderea, who is ok but lacking in power and diversity when the 2 are compared. However the album is near all-instrumental, and the sound is more of a laid-back-jamming-with-your-buddies than highly orchestrated rock symphonies - albeit for the last tune "Claudette". I finally found the key to this record in a highly unexpected place - listening to The Stones "Get Yer Ya Ya´s Out" one night and then putting "Dietro l'Uragano" on right after, I suddenly realized that you need to listen to this as a live record. It really sounds like 4 guys fiddling about at a concert, and at times they DO penetrate the sound system speakers with a force to be reckoned with - much credited to the drumming of Santanderea (who reminds me of an italian John Bonham on steroids), and the spacey keyboard licks sometimes intertwined with high soaring moog solos, fripp-like guitarlicks but faaar more ITALIAN and throbbing basslines makes this offering a potent meat and potatoes prog-rock live feast.
The first cut serves as an opener and kindly welcomes you to the show with a dreamy instrumental fronted by a melody driven moog that takes in some jazzy flavouring combining small and sneaky rhythm breaks - suddenly transforming this song into an evil Mario brothers theme. I like it! "Valigie Di Terra" is actually my favourite out of the bunch with the thunderous drumming, the giant leaps between the valleys and the peaks, and the small parts in the song where you can hear the musicians talking to each other by jamming in different directions makes this a wonderful 10 min. symphonic semi-jam, that I listen to far too often. I´d say that probably 50% of this is sheer jam. "Idea imcompiuta" starts out like an old horror movie with horrendous sounding keyboards that leads into a terribly confused little piece with sniffling jazzy drums and a jump rope bass line, that sounds like a man chasing mice inside his scull. Very mysterious indeed. The album closes with the beautiful "Claudette" that really is the closest you get to the old Alphataurus, if it wasn´t for the jazzy stylings of the breaks and turns, and the missing Bruce Springsteen vocals of the first. The only draw back might be the reserved vocals, that in truth serves more as muffled melodic words than actual "singing". The closing part is particularly good- sounds like a rock n´ roll infused Edgar Froese on top of a wild a rumbling rhythm section, climbing and climbing until it finally erupts. What a way to end an album!

I have been listening to a lot of RPI lately - once I cleared the language barrier (Come on man - most of the time you can´t understand diddly squat of what´s reverberating between Mick Jagger´s two beeboppaluuuuing slugs - following in the Stones analogies....) - it was all downhill I can tell you. The skills of these musicians are second to no one, and combining that with a childish approach to the instruments, meaning playfulness and imagination at the front wheel, and that special something - the secret ingredient that IS RPI, you are treated with progressive rock that is apart from it´s brothers in the UK, Germany, France, the States - you name em´. Something else.
Posted by Zen Archer at 6:28:00 AM