The Blue Mitchell Quintet
1965
Down With It! 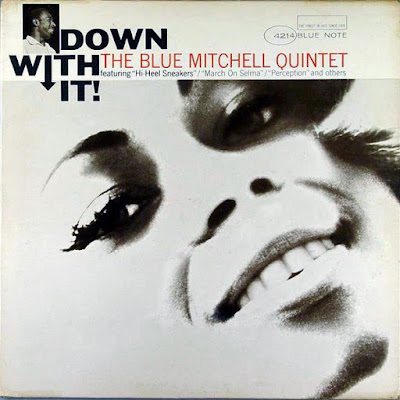 Consistency is the name of Mitchell's game. His tone is focused and relaxed, and beautifully rounded in all registers. His melodic lyricism and fleet-fingered fluidity are second to none. After spending over five years in pianist Horace Silver's Quintet, Mitchell and his frontline mate, tenor saxophonist Junior Cook, matriculated in 1964 to form their own group.

Following its classic The Thing to Do (Blue Note, 1964), the Mitchell Quintet re-emerged in 1965 with the equally exciting Down With It!. Mitchell and company waste no time getting started, jumping head first into an R&B version of "Hi-Heel Sneakers. In the mid 1960s, too many commercially driven, artistically void throwaways were recorded as Blue Note searched for their next "Sidewinder -esque jukebox smash. In the wrong hands, "Hi-Heel Sneakers could have easily fallen into this trap, yet Mitchell's group is both groovy and sophisticated. Pushed by Al Foster's incessantly hard-driving ride cymbal, the energy level is high and there is inspired blowing all around. Mitchell displays his command of the blues in short motivic statements that get seriously funky.

"Perception, the first of his two original compositions, is a Latin-tinged medium-tempo piece that is perfectly suitable for Mitchell's flowing lyricism. Though the difficult harmonic motion requires heavy use of chromatics, Mitchell's playing remains unforced and accessible. Pianist Chick Corea (at the time only twenty-four years-old) also shines, spiraling through the descending chord sequence.

Mitchell was arguably the most sensitive trumpet balladeer on the 1960s Blue Note roster, and on "Alone, Alone and Alone his subtle, pensive approach is gracefully on display. Cook shows his gentler side as well, even while dissecting the harmony with probing arpeggios.

"March on Selma is a Mitchell-composed soulful blues shuffle that sounds right out of the Horace Silver songbook, complete with riffed backgrounds and a second theme preceding the final melody choruses. Everyone digs in on "One Shirt, a heavy swinging minor piece that features some of the album's most intense soloing, especially by Cook and drummer Al Foster. "Samba de Stacy is a fitting conclusion to a most satisfying album; Mitchell plays his strongest solo of the date over some tasteful comping from Corea.

Definitely worth repeated listenings, Down With It! captures the underappreciated Blue Mitchell during what was the most productive stage of his career. It is a fantastic example of this unheralded master and one of the tightest working bands of the 1960s.

Blue Note vinyl, man, you can't go wrong! One look at that awesome cover and the liner notes, and, hey, you are transported back to the 1960s, man. And there's no better place to land than some little dark New York City jazz dive with a beer in your hand and this cool jazz playing on stage, and by cool jazz I refer not to the "birth of the cool" kind of jazz genre, but this cool and soulful laidback jazz with the tight compositions and the meaningful improvisations that never get old. Ah, take me back, take me back!
Posted by Zen Archer at 12:10:00 AM