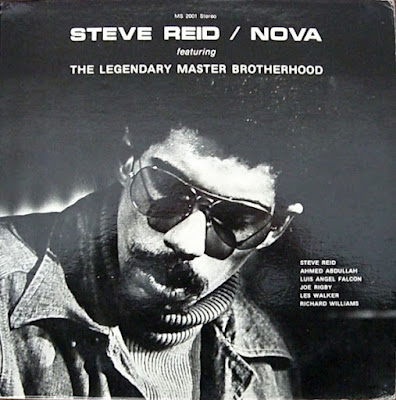 
This album is like a mongoose.  One minute you find yourself thinking that it's cute, the next minute it stands up on its hind legs and you can't help but laugh.  Just when you think you know everything about Nova it hands a cobra a can of whoop-ass and has it for lunch.  The leader, Steve Reid, is a drummer and smashes the hell out of all sorts of things.  In fact, most of the musicians play in a very edgy way.  Some of Nova could be described as Ornette Coleman's The Change of the Century meets Mr. Bungle's Disco Volante.  The album absolutely kicks ass.  Never heard anything like it.  It's certainly one of my absolute favorite Jazz albums.

Damn, this smokes! This kicks off with some uptempo, Ornette-style post-harmony but melodic playing, but about halfway through the first cut, Reid's playing starts getting markedly funkier and, oddly, punkier--by the time you hit the barnstorming "Lions of Juda" and amazing side-ender "Free Spirits - Unknown", there's a very complex vibe going that consists of Abdullah and Rigby doing something like idiomatic free jazz (albeit not in a pat way--very beautifully and with passion) while Walker, Falcon and Reid are in some kind of proto-post-punk trance--Reid's playing in particular begins accentuating the basic rhythm very heavily in a way that was uncommon not only in free jazz but really in most post-dixieland jazz--while it's still complicated and virtuoso, there's a focus on maintaining the main rhythm here that's unusual. But it's not the stomp of Miles' fusion bands or Tony Williams when he's playing with rock guitarists--it's, again, this kind of hi-hat-heavy post-punk, menacing sound. Half this record sounds like This Heat or Pere Ubu with solos, basically. The end of "Free Spirits", in particular, when Reid reels back from a post-bop-ish "cymbals only" beat to something like one of Charles Hayward's insane rhythms that sounds like a drum machine--holy shit. It's cool because it's not intentional but neither is it a "happy accident" or some kind of savant-avant--it's just that one of the logical, but little explored, avenues that free jazz could have gone down. Find this!

This is an astounding record by an artist who has been criminally neglected. The list of those who could make out jazz funky is a short one. Ornette of course springs to mind as do the musicians of the Art Ensemble and their Chicago brethren. Drummer Steve Reid must now be added to that list. From the swaggering thunder of "Lions of Juda," to the gentler songs that close this album, there's nary a misstep. This music is as beautiful and dangerous as a shower of broken glass -- just when you think you've got a song figured out, this clever group of largely unsung musicians heightens the tension and takes things careening off in an unexpected direction. Have no fear though, these men are always nothing if not firmly in control. This is a wonderful document of a long vanished New York scene that was long on every emotion, not just fury. Find this album and buy it.
Posted by Zen Archer at 7:08:00 PM