Charles Tyler
1978
Saga Of The Outlaws 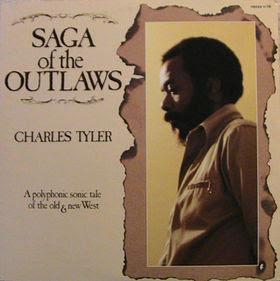 Saga of the Outlaws is just about the most fitting title one could expect for saxophonist Charles Tyler's fifth LP under his own name. Tyler was more than an outlaw (or a gladiator, to paraphrase Stanley Crouch), but unfortunately his name crops up rather rarely in discussions of jazz's historical vanguard. He traversed the Midwest, from Kentucky to Indiana to Cleveland, Ohio where he met saxophonist Albert Ayler in the late 1950s. He joined the Ayler brothers in New York in the 1960s and in their groups he gained a degree of notoriety. Tyler figures prominently on Albert Ayler's Bells (ESP, 1965), his feral wide-vibrato alto offering a more unhinged (and as LeRoi Jones would say "bloodthirsty") take on scorched-earth saxophone playing, a worrying bray that became a hallmark of the "Cleveland school," but in Tyler's hands it's significantly more severe.

But Tyler's recorded history is rather scattered, and it's a shame that he didn't make more of a name for himself considering his discographical pedigree. He waxed two dates for ESP under his own name in 1966 and 1968 (the latter while studying at the University of Indiana), as well as a pair of rare sides for his own Ak-Ba label in addition to this Nessa session. Recordings as a leader also appear on Adelphi (a solo baritone date entitled Sixty Minute Man) and European labels like Silkheart, Storyville and Sonet.

Waxed during the 1976 Wildflowers sessions, an acclaimed five-record set of "samples" from the New York loft jazz scene of the mid-1970s, Tyler's 36 minute Saga didn't really lend itself to excerpting. Luckily, Chuck Nessa stepped in to shepherd its release on his Nessa imprint. This is its first issue on compact disc. Tyler is joined here by regular foils, trumpeter Earl Cross, drummer Steve Reid and bassists Ronnie Boykins and John Ore. Reid, Boykins and Cross appeared on Tyler's excellent first Ak-Ba release, Voyage from Jericho, in 1975.

Ostensibly, the group and performance concept (subtitled "A Polyphonic Tale of the Old and New West") is that of a double trio sharing a drummer. Ore and Boykins tug at one another, but each supports a horn player, and the interplay is at first an outgrowth of superimposition. After a wide, keening coda from alto and trumpet reminiscent of mournful European or early American folk melodies, basses enter with alternating lopes, throaty stutter and ornate wraparounds as Reid inverts and double-times backbeats and breaks. Tyler's opening solo is hard-edged squall, flat-note shims with demarked length piling onto each other in speed-aided blur. Occasionally a bit of honky-tonk blues a la Ornette Coleman will creep out only to subsume itself into the white-hot sonic quilt. Perhaps too much could be made of Tyler's debt to the Aylers' approach, but it's hard not to equate the two, as the extraordinary speed of his improvisations coupled with an extremely wide and gut-wrenching bottom is pure Cuyahoga freedom. Tyler often plays around with that influence, referencing the "Witches and Devils" dirge before diving headlong into a Latin-Berber collision straight out of Science Fiction.

The rhythm section is superb, with Reid a tremendously telepathic player whose swing goes beyond jazz into North African rhythms and a decidedly modern funk sensibility (his recordings on the Mustevic label are sought after by DJs). Coupling him with the rock-solid anchors of Boykins and Ore, who guided the music of Sun Ra and Thelonious Monk respectively, allows for a formidable and kaleidoscopic approach to rhythm that is nevertheless locked in forward motion. Trumpeter Earl Cross was very active in New York during the 1970s with Tyler, as well as saxophonists Noah Howard and Frank Lowe. Here, his skittering lilt and Moorish sensibility fill the ensemble's wide rhythmic and harmonic area with dusky daubs, a steely-voiced hummingbird to the leader's garish and joyous calls.

Saga of the Outlaws includes an extraordinary range of modern music in a simultaneous display of emotions and references. It's only too bad that Tyler himself is no longer with us to share in the rediscovery of his music.
Posted by Zen Archer at 10:56:00 PM