Blue Mitchell
1974
Many Shades of Blue 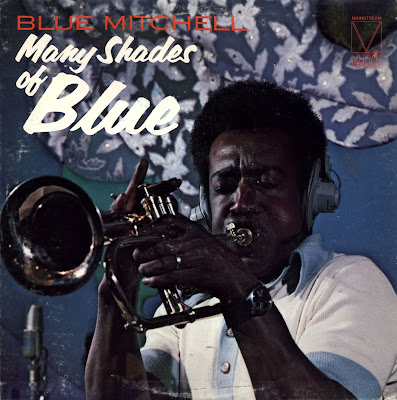 Sweet electric 70s funk from Blue Mitchell -- blowing here in some of the hippest arrangements of his career! Blue's trumpet alone is always pretty darn great, but for this album he's working with arranger Dave Matthews -- who gives the tunes fierce groove that mixes vamping guitars with snapping drums -- sort of picking up the groove that Matthews forged with James Brown, but allowing for a lot freer jazz interplay!

The guitars are often recorded in a cool way that has them sounding a bit "watery" alongside the rhythms -- so much so, you'd swear they were keyboards at times -- and this approach sounds really great underneath Blue's tighter, harder, more punctuated solos over the top of the tracks.

I'm the biggest sucker for Blue Mitchell's 70s Mainstream sides. They were a major component of my initiation into the realm of jazzfunk and the first three are etched in my mind forever so, thanks the psychological process of imprinting, his sides are among the sine qua non of the milieu for me. I finally picked up a near mint vinyl copy of this one a few weeks ago and now need only Vital Blue to complete my Mitchell Red Lion series. This funky muther has already appeared at My Favourite Sound and Audio Design Studio in the past (check the shad shack for links) but during the Month(ish) of Mainstream we're stackin' 'em high and sellin' 'em cheap and this one's just another on the pile.

As usual, Blue has a stellar line up behind hime here since it seems Mitchell and Sarah Vaughan were the only artists on whom Shad actually spent proper money. The two are also tied as the most voluminously released artists on MRL (both providing 7 albums of new material for Shad in a few short years) so their stature, productivity and faithfulness were probably big factors in that equation. Not counting the split with Roy Haynes when Shad was in scavenger mode, this is the last LP Mitchell released on the label before it shuttered, after which he moved on to a series of labels.

Among these were RCA (Stratosonic Nuances, Funktion Junction) and ABC (African Violet, Summer Soft) where he would be slathered in strings and discofied to such a degree that on occasion he might as well have been just another one of the session musicians. Never again would he regain the raw funkiness and full-on souljazz feeling that typifies his Mainstream output. Mitchell would die before he had a chance to do so, passing away prior to the end of the decade at the relatively early age of 49.
Posted by Zen Archer at 4:19:00 PM