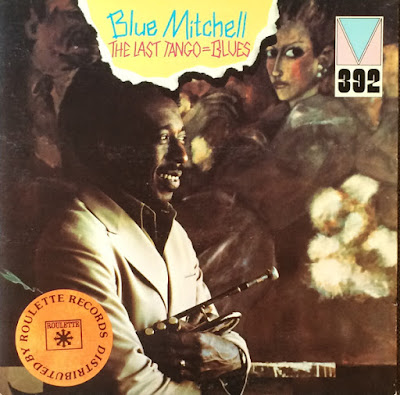 No tango here – just a great batch of hard, funky, trumpet-heavy groovers – all in the best early 70s Blue Mitchell mode! The album's easily one of Blue's best from the time – and although the tracks are a bit short, they're put together in a way that dovetails nicely with his earlier grooves on Blue Note at the end of the 60s – arranged by Richard Fritz with some fuller reeds behind the trumpet, in a mode that's partly between funky soundtracks and Kudu Records styles of the period.

The Last Tango = Blues translates the direct, soulful hard bop approach of Blue Mitchell's cult-classic Blue Note sessions into the funk-inspired grammar of mid-Seventies mainstream jazz. Teamed with guitarist David T. Walker, bassist Chuck Rainey, organist Charles Kynard and drummer Paul Humphrey, Mitchell concentrates on straightforward but imaginative readings of contemporary pop hits like "Killing Me Softly with His Song" and Cymande's "The Message"--Richard Fritz's vibrant arrangements further underscore the album's connection to radio and even blaxploitation soundtracks, but the performances are strictly next-level, complete with some of Mitchell's most fiery trumpet.
Posted by Zen Archer at 4:09:00 PM