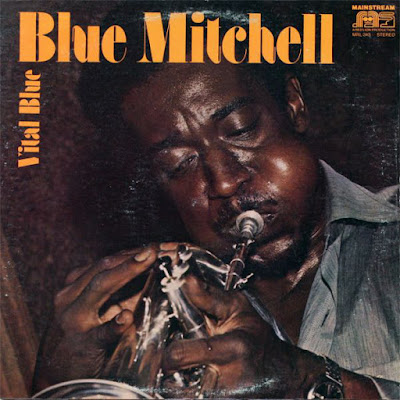 One of the more obscure Blue Mitchell albums of the 70s – and one of the most far-reaching too! The set's still got an electric current, like his other work on the Mainstream label at the time – but there's also less funk at the core, and more of a spiritual jazz vibe – a quality that definitely burns with the "vital" of the title, and which draws strongly from the album's great use of Joe Henderson on tenor and flute – whose presence here really helps underscore the righteousness of the sound! Ernie Watts also blows a bit on the record – and the rest of the group includes Walter Bishop Jr on acoustic and electric piano, Stan Gilbert on bass, and Doug Sides on drums. Susaye Greene adds in some totally amazing vocal effects at a few points – which really furthers the unique quality of the record

Often times, the label which an album is released on can tell you a lot about what the music will sound like, or will offer some sort of description of it. In the case of all of the albums released on the rather obscure Mainstream Records, this tendency does not hold true. Mainstream released a series of high quality soul-jazz recording in the ’60s and ’70s, but little more information can be gathered on the label. That is because the label remained, ironically, very underground rather than mainstream. While as a label, Mainstream is often forgotten, it was an important stopping point for major names like Carmen McRae, Maynard Ferguson and Art Farmer, among others. Its most consistent contributor, though, was trumpeter Blue Mitchell. Taking on the name Blue, which of course wasn’t given to him at birth, Mitchell fully embraced jazz’s strongest influence, the blues, and we hear this very clearly on spectacular 1971 release, “Vital Blue.”

Blue is clearly not fully embracive of new movements in jazz as, despite its 1971 release, it more resembles the sound of the 1960s. While he is playing in a very soulful manner and treads on funk with the ironically titled “Booty Shakin’,” he shies away from the fusion sound that was sweeping the jazz world by that year. He is not opposed to new techniques, though. The most innovative of his strategies is his use of the voice as an instrument, an idea not commonly explored in non-vocal jazz, by then. He employed Susaye Greene, who is notable due to her connection to Ray Charles, as his vocalist. She sings high pitched, wordless lines that at times resemble a flute. This is just a nuance of the album, but somehow manages to greatly improve the tunes. Joe Henderson and Ernie Watts account for the two-man reed section which sometimes rival the extraordinary playing of Mitchell himself. The horn trio occasionally play in unison leading to one of them breaking and soloing which allows for some pleasant contrast. Some of Mitchell’s best playing comes in the form of “Unseen Sounds” on which the composition is Spanish inspired and where the trumpeter really shines through. This songs title could very well refer to the fact that this was a sound Blue had not touched on yet. His style ranges to bebop following this track for the last song, the title track “Vital Blue” where Joe Henderson comes closest to being the most impressive horn player. Over the course of the album, the rhythm section proves to be very well capable of playing in a variety of styles. They are best though, on the albums opening two songs.

Sometimes, folks wrongfully attribute greatness only to those who were considered to be ahead of their time. Blue Mitchell clearly was not ahead of his time, in fact, he proves on “Vital Blue” to have been well behind it. But it is still a great album. He improved on what had already existed. Of course, he was not the only jazz player who had a similar sound in 1971, but it is safe to say he was one of the best. “Vital Blue” will surely inspire you to look further into Mitchell’s discography and the discography of Mainstream Records, one of jazz’s most important forgotten labels.
Posted by Zen Archer at 5:29:00 AM