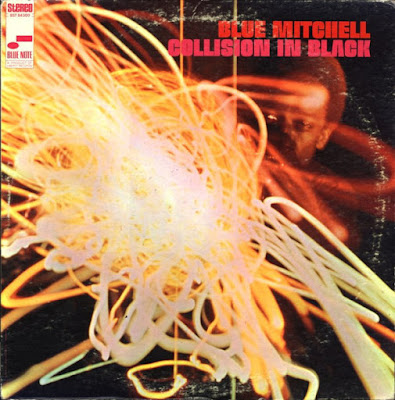 This record is highly sought after and for good reason. Blue's blowing had blown minds but three weeks earlier with his heavyweight work on the recently departed Jimmy McGriff's The Worm, which was just about to hit the shelves as Mitchell went into the studio to record Collision In Black. Perhaps due to that experience he opted for an even funkier soul-jazz sound than he had toyed with on his previous release and one that he would continue to explore with great results until his premature death in 1979. This session comes between Heads Up! and Bantu Village in the Blue Note Catalogue, although both the latter and Collision were not included in the otherwise comprehensive package of his Blue Note era put out by Mosaic a couple years ago. After Bantu, he joined and toured with Ray Charles and then the John Mayall Band, recording solo LPs on Mainstream during his downtime.

In the 1960s Blue Mitchell began recording with Blue Note. There he often worked with Monk Higgins who did the arranging, and some of the song writing and production on Collision In Black. Higgins also played on the record along with Ernie Watts and Paul Humphrey. It was during this period and with this album that Mitchell began moving away from playing Bop to a more soulful and commercially aimed form of Jazz. On Collision In Black you hear some really early forms of Soul-Jazz such as the title track, Deeper In Black, Jo Ju Ja, I Ain’t Jivin, Digging In The Dirt, Who Dun It, Kick It and Keep Your Soul. Swahilli Suite, written by Higgins, is the best cut with its horn arrangement and solo by Mitchell. A very solid album for low-key Soul-Jazz.
Posted by Zen Archer at 1:32:00 AM