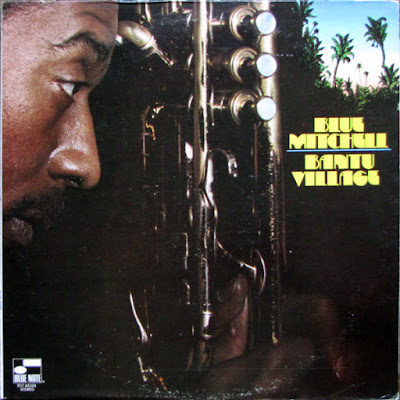 Miami trumpeter Richard 'Blue' Mitchell made his name as a sideman in the celebrated late 1950s bands of Cannonball Adderley and Horace Silver playing a blues-infused form of bebop known as hard bop. He cut some LPs under his own name for Orrin Keepnews' Riverside label at the end of that same decade and then inked a deal with Blue Note in 1963 (while still playing with Silver), where he started making albums with a pronounced soul-jazz flavour. Now reissued for the first time (and the inaugural release in a proposed series of Blue Note reissues from Soul Brother) is Mitchell's Blue Note swansong from 1969, 'Bantu Village.' Though an overlooked gem in Mitchell's Blue Note canon as far as jazz buffs are concerned, the Afro-centric-themed LP has not been ignored by groove robbers in the hip-hop community, who've enthusiastically sampled sections from album's funky number, 'Flat Backing' (its plunderers have included Akinyele featuring Kool G Rap - for the rather dubiously-titled track 'Break A Bitch Neck' – and fellow rappers Del and Lucien, the latter a Gallic rapper from Paris). But that's not the killer cut on this album – rather, at least to my ears, the oddly-titled 'Na Ta Ka' is the obvious standout (apparently it used to be popular on London's jazz dance scene of the 1980s). The opening cut, 'H.N.I.C.' is a good one too, sounding like it was inspired by The Isley Brothers' funky jam, 'It's Your Thing.' In terms of its personnel, 'Bantu Village' finds Mitchell surrounded by some first rate players, including Crusader Wilton Felder on bass, drummer Paul Humphrey and pianist Monk Higgins (who also penned much of the material). Mitchell is in fine fettle, trumpet-wise, blowing some bright, virile horn passages on the uptempo tracks and sounding more introspective, tender and lyrical on the down tempo material (such as the plaintive closer, 'Bush Girl').

One of the funkiest albums ever on Blue Note – a set that mixes the trumpet talents of Blue Mitchell with some killer backings from Monk Higgins – all in a groove that more gritty edges than the best funky soundtracks of the time! Higgins keeps the backings full, but always quite lean – fusing all elements together into a sharp, tight rhythm that steps along with some of the slight African touches you might guess from the title – a groove that's not really that authentic, but which resonates with some of the best inspirations that Hugh Masekela was bringing to American music at the time. And while the album might be an attempt to cash in on Masekela's groove, the feel here is really quite different overall – as tracks are nicely stretched out, with plenty of room for jazzy solo work – and a groove that's much harder overall, thanks to Higgins!
Posted by Zen Archer at 1:59:00 AM