Blue Mitchell
1966
Bring It Home To Me 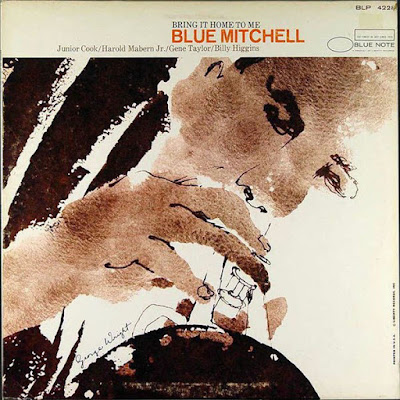 A 1966 recording that concluded an exceptional run of creative music by this post hard-bop quintet. As Michael Cuscuna succinctly explains about this Blue Note 75th Anniversary Edition . . . "When Horace Silver disbanded his longstanding quintet in early 1964, Blue Mitchell wasted no time in forming a new quintet with fellow bandmates Junior Cook (tenor sax) and Gene Taylor (bass). The chemistry that they had developed after six years with Horace Silver was uncanny. Blue Note signed the group which was completed by two relative unknowns: Chick Corea (piano) and Al Foster (drums)."

Chick Corea and Al Foster appeared on the first two albums: The Thing To Do and Down With It (released 1964 & 1965 respectively) but were replaced for this final quintet session by Harold Mabern and Billy Higgins. These details are worth getting into as this horn partnership between Mitchell and Cook has turned out to be one of the most enduring in all of jazz history. As leader, Blue Mitchell went around to certain musicians and solicited compositions from them specifically for his band. Jimmy Heath came forward with several gems as did trombonist Tom McIntosh whose Port Rico Rock captures beautifully the halcyon, celebratory spirit of those times (as do, in fact, all three albums). Typical of the ingredients at play are carefully constructed tunes littered with pungent rhythms, rich harmonies, inspired melody and a kind of raw eloquence brought about through the interplay of the horns. The spontaneity of the soloing is another trademark of this fine group and it's not difficult to hear the influence of Junior Cook's xphrasing on young giants of the time like Joe Henderson.

So Bring It Home To Me offers more unrecognised glory from the vaults and rounds out nicely the work this group delivered in the mid-sixties before Blue Mitchell moved onto larger ensembles. As a big fan of the 1950s & `60s hard bop quintet format with usually the Bb twins front and centre (tenor sax & trumpet), I can highly recommend these recordings, or, as the legendary tenor saxophonist Harold Land once said about this format, which he contributed greatly towards. . . "Five is bliss".

Genius work from trumpeter Blue Mitchell – one of his most solid sides as a leader from the 60s, and a well-deserved treasure in the Blue Note catalog! The album's quite different than the straight soul jazz of Blue's early days on Riverside – or the more arranged dates of the late 60s – and it features him moving in a soulful, lyrical, modal style – quite similar to Horace Silver in conception, but with a fresh execution that's mighty nice – and which marks Mitchell as one of the fresher trumpet voices of his generation! The whole group's great, too – and the lineup includes Junior Cook on tenor, Blue's old bandmate from Horace Silver's group – plus Harold Mabern on piano, who really helps shape the sound of the record

On thirty three albums recorded as a leader, "Bring it home to me" in 1966 is the thirteenth. This is not only an excellent album but also the artistic peak of his discography. The album is mixing modal harmonies, lyrical moments and groovy and even funky rythms. This album is very rare on LP format and very uneasy to find with an analog restitution of the sound. Trumpetist Blue Michell is here joined by Junior Cook on tenor, Harold Mabern on piano, Gene Taylor on bass and the geat Billy Higgins on drums. The artistic direction is strong, the aesthetic is powerful.