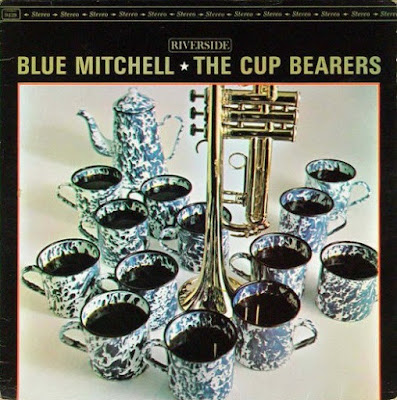 From 1959-1964 Blue Mitchell played trumpet in what was arguably Horace Silver's greatest quintet. (At the very least, it was his best since the original Jazz Messengers.) This was also a very popular group, so they made numerous recordings for Blue Note and toured for months at a time, which left Mitchell and his bandmates little time to pursue potential solo projects. But in August 1962, Blue had some time to record "The Cup Bearers" for the Riverside label, for whom he had made some first rate albums in the late 50s -- "Big Six," "Out Of The Blue," and "Blue Soul" -- all of which I have previously reviewed. "Cup" breaks from the hard-bop tradition of these three titles, and establishes a more modern sound akin to, not surprisingly, Horace Silver's Quintet. This is only natural considering the band on this date is the Silver group -- Blue, Junior Cook on tenor sax, Gene Taylor on bass, and Roy Brooks on drums -- with Cedar Walton replacing Silver on piano. Oddly, the liner notes go to great lengths to distance "Cup Bearers" from Silver's Blue Note output from this period, but nearly four decades later, their similarities is "Cup's" greatest strength in my opinion. This album falls nicely between Silver's "Tokyo Blues" and "Silver's Serenade," and fans of those discs will be enjoy bearing the cup.
Posted by Zen Archer at 10:47:00 PM