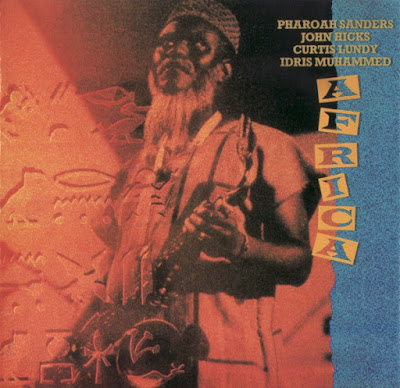 This is just another late-80s jazz album: clean sound, renewed appreciation for technical hard bop, and well-known standards included. "Africa" is a lot like "The Creator Has a Master Plan" and "Thembi", but with that clean 80s production. It's pretty accessible, also: you get the loudest part of the album out of the way in the first two seconds, as the overblown intro is more intense than any of the soloing on any tracks. Tracks 2-5 are pretty much hard bop, and particularly on "Speak Low" he sounds exactly like Coltrane. Wikipedia says this a tribute to John Coltrane, so that makes sense. Anyway, I wouldn't recommend this to anyone as an introduction to Sanders but if you're working your way through his albums this one's pretty enjoyable.

Pharoah Sanders delivers some of his usual avant-garde sound on saxophone, coaxing everything he can out of it, especially on the opening track 'You've Got To Have Freedom'. Africa is a mix of post bop and avant-garde jazz. It's a tribute to Sanders mentor John Coltrane, and Sanders sounds a bit like Coltrane sometimes, Sanders playing mostly his own compositions though, others are Coltrane compositions. If you like drummer Idris Muhammad he's on Africa as well, I seem to be drawn to lots of his stuff, including a few solo albums. Pianist John Hicks is good, not McCoy Tyner good, but you notice him a lot. Some of the tracks on this album suit a late night cocktail lounge, with only you drinking at the bar, you and your memories. Don't get confused by the album title Africa, it's the title of a Pharoah Sanders written piece, very typical avant-garde Sanders with chanting as an intro, then some smooth groove in the middle, a pretty cool over 8 minute track. A real smoky slower number 'Heart To Heart' shows Sanders can be subdued and romantic and John Hicks plays some beautiful jazz piano. The last track 'Duo' has one of my favourite drummers Idris Muhammad and Sanders jamming hot and heavy, just them, guess that's why this avant-garde track is called duo. So there you have it, a real split sound on this album but I enjoyed it quite a bit. Pharoah Sanders is a great explorer and his creative powers are quite apparent on Africa.
Posted by Zen Archer at 4:28:00 PM