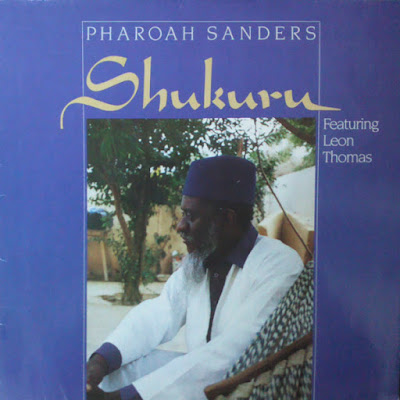 One of those albums you'd like to love more than you actually do, Pharoah Sanders' "Shukuru" is noteworthy as being the album that reunited Sanders with vocalist Leon Thomas, who sang on some of Sanders' most indearing and powerful compositions-- among them the legendary "The Creator Has a Masterplan".

Thomas actually only joins the band (William Henderson on keyboard, Ray Drummond on bass and Idris Muhammed on drums) on two tracks-- "Mas in Brooklyn (Highlife)" and "Sun Song". The former gets a full calyso reading complete with steel drum sounds and chanted vocals traded between Sanders and Thomas. It's a lot of fun, but by and large, throwaway. The latter is one of the true gems on the album-- a pretty ballad that serves as both a launching point for Sanders' best balladry and Thomas' vocal, with the latter soaring in his upper register wordlessly between verses intoned in his trademark baritone. It's by and large simply stunning.

The rest of the record has got its issues however, and by and large this comes in the part of Henderson's synthesizer-- while his piano tone is virtually indistinguishable from an acoustic piano, several tracks receive irritating synth vocals or strings (it's really hard to tell which, it's fairly indistinct and obnoxious), mangling otherwise fine performances of traditional tenor feature "Body and Soul", Sanders-penned "Jitu" (although admittedly the leader manages such a powerful solo it gets past it) and an absolutely breathtaking reading of "Too Young to Go Steady". In fact, were these synths absent, I suspect I'd think much higher of the album, but they're so intrusive they disturb my ability to enjoy this. At least opener "Shukuru" and closing funereal piece "For Big George" are spared this as the use of synths of them are far more tasteful (although one questions Sanders' choice to intone his wife's name over the former's smokey lines, but that's another story).

In the end, it's an album that comes from its era-- five stars if it didn't have irritating synths, Sanders is in top form and several of the pieces are superb.

An '80s session reuniting a great team from the '70s--vocalist Leon Thomas and tenor saxophonist Pharoah Sanders. They don't take things as far outside as they did then, but still soar and glide while pianist William Henderson, bassist Ray Drummond, and drummer Idris Muhammad fill in underneath them. - by Ron Wynn, AMG

You can really tell once you start getting into the 80s that Pharaohs life has become more stable, or at very least the music. Instead of the mad-jungle'd explosions of pure emotion and sound, you get laid back chill jazz, and at the points where things get a bit more chaotic, it sounds as though you are within a mild communal festival. I would never consider this bad, but without a doubt nothing new or ground breaking. Which is OK for me, as Pharaoh has by this point already given Jazz plenty.
Posted by Zen Archer at 4:05:00 PM