Pharoah Sanders
1982
Heart Is A Melody 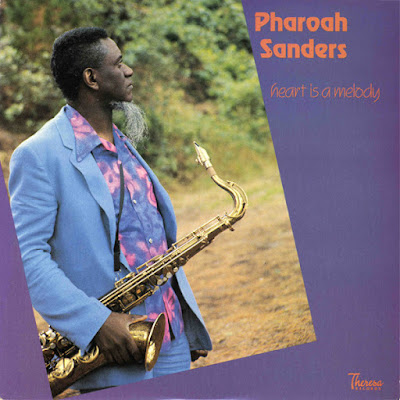 This 1982 session, live from Keystone Korner in San Francisco, is my personal favorite from Pharoah Sanders' sizeable discography. In the company of longtime pianist William Henderson, bassist John Heard and drummer Idris Muhammad, Sanders navigates a collection of jazz standards and original material with power and aplomb. The grand highlight is a 22-minute rendition of John Coltrane's "Ole" that peels the roof off the nightclub. Pharoah's solo exploration is the full embodiment of intensity. Every time you think he can't possibly blow any wilder, he shovels more coals onto the fire. Tadd Dameron's "On A Misty Night" and Coltrane's "Naima" receive tasteful interpretations, and a beautiful take on the old chestnut "Rise and Shine" shows that Sanders can still swing with the best. On the more exotic side is the fun-filled "Goin' To Africa", a hoot of a tune inspired by West African highlife music which features Sanders' gruff, boisterous vocals in interplay with the audience. "Heart Is A Melody Of Time" is a new look at Pharoah's classic "The Creator Has A Master Plan". Here the vocal section delivered so passionately by Leon Thomas on "The Creator..." is replaced by a new melody sung by a choir that includes Andy Bey. A nice balance of straight-ahead jazz blowing, world beats and the chaotic musical freedom that Sanders is (in)famous for. Highly recommended.

A great 1982 live album, from Keystone Korner in San Francisco. With pianist William Henderson, bassist John Heard and drummer Idris Muhammad. There's some original material by Sanders but the highlight is a 22-minute rendition of John Coltrane's "Ole" that is electrifying. Pharoah is known to go a little crazy and be a little intense and no different here, flames must be coming out of his sax. Pharoah also tackles Coltrane's "Naima" and does a fine job. There is an Afro beat feel to "Goin' To Africa", inspired by West African highlife music which features Sanders' unusual vocals, with the 'live' audience involved. There is a choir and, "The Creator Has A Master Plan" feel, to some original numbers, which makes me think of the great Sanders album 'Karma'. There is the usual wild freedom to Pharoah Sanders music as well, popping out all over the place, its never, ever boring.