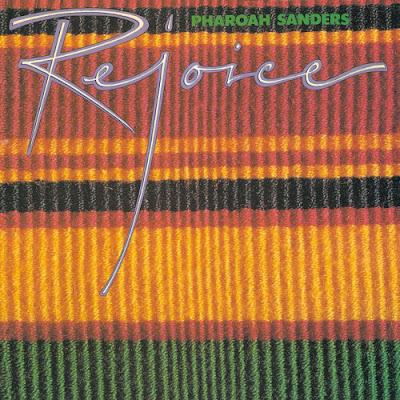 I came late to Sanders's music, a big mistake. I tend to steer clear of music where there seems to be a manifesto nailed to the album cover, the usual guff promising brighter days and a large dollop of cosmic super-awareness. Knowing a little of his contribution to Coltrane's final phase ('phase' now there's a word oft employed on message recordings) I decided that I'd leave his music to those more committed to that 'sound'.Only in the last couple of years have I delved into the Sanders canon. I went for 'Black Unity' first and liked it, 'Tauhid' had it's moments too.This recording has more or less confirmed for me that I prejudged this guy.The opening track 'Rejoice' starts with a cascade of percussion from none other than Elvin Jones and Bobby Hutcherson.When Elvin hits the skins the skins stay hit, so we know we are in for some percussive treats.Surprisingly then, the drums give way to an altogether lighter Brazilian tinged rhythm, which carries through to a female voice intoning 'Join Us In Peace and Love' before Pharoah comes in sounding hot and urgent- a lot like Coltrane around the time of 'Meditations'. There is a warmth and humanity that really comes through on this track, and like his former employer, Sanders is nothing if not sincere in his music making. The following two tracks offer a glimpse of the music of Nigeria and Ghana known as 'Highlife'. They move along nicely but I doubt that this is what fans of Sanders are here for. The next piece up is a beauty: 'Origin' features a killer melodic line done at a pace and with the sheer exuberance that recalls something like 'Countdown' from 'Giant Steps'. Sanders gets sterling support from Hutcherson, John Hicks on piano and notably pristine timekeeping from another drum great, Billy Higgins.By the time of this recording (1981) Sanders was back to playing changes based material again though it's kind of a surprise hearing the old Benny Carter warhorse 'When Lights Are Low', the guest soloists here are Danny Moore on muted trumpet and Steve Turre on trombone. The choice of this song seems to be a nod to Miles who liked to play this live and recorded it more than once.However Sanders steals it with his no-frills solo.There then follows the two tribute pieces to John William Coltrane;'Moments Notice' starts off with a vocalized treatment of the melody with some pretty trite lyrics that I could have done without but it's soon over then it's down to business with the tenor of Sanders and then later Bobby Hutcherson's vibes workout. A pity Hutcherson was five or so years too late on the scene to play on the original Blue Note date (an intriguing proposition). 'Central Park West' was always a favourite of mine, it's beautiful stately melody is done more than justice by the sounds Sanders conjures up, the backing vocals may not be to everyone's taste but I think they add something unexpected to a tune that gets played by every tenor on a CD at least once in a career.One thing I like about this album is the range of instruments, 'Ntjilo Ntjilo' is a lovely little piece for tenor sax, piano and harp and gives yet more room for Pharoah's muscular yet tender playing. The final track has the music pared down to just Sanders accompanied by the piano of Joe Bonner, ending the album in thoughtful fashion.
So we have a great avant gardiste getting his second wind in more mainstream material. His playing is magisterial throughout and for those who want a slightly different twist on over-familiar Coltrane material then this is one worth seeking out. The liner notes puts it best...'Walk with us, dance with us, sing with us, rejoice with us, Join us in peace and love'. That's one message even a cynic like me can't argue with.

Lovers of his famed tenor screech and deep spiritual grooves will find this album a little unsatisfying. But this is a whole decade away from when he was doing that kind of stuff, and I personally think he moved into the '80s higher gloss era very successfully. On top of that I personally think that the sun shines out of this guy's arse, so I'm a little biased in his favour.
Posted by Zen Archer at 3:13:00 PM