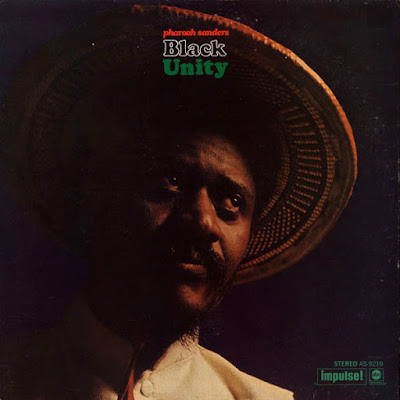 Biased opinion #1: Pharoah Sanders was the preeminent tenor saxophonist of the ’70s. In an America still reeling from political assassinations, human rights struggles, campus unrest, Vietnam, his gut-wrenching, cathartic wails and warrior fury were cauterizing balms to the collective psyche.
Biased opinion #2: Sanders’ alchemic formula of Coltrane modals, African percussion, multi-tonics, blues mutations, yodels/tongues/spirits, focused chaos and mojo hands presaged the world music of the next decade.
Biased opinion #3: 47 years after it was released, Black Unity is still the most prescient statement of cultural affirmation and solidarity that any musician (before or after) has ever transmuted to tape.

Comprising of just the one title ttack, the album is a rollercoaster of a ride which has to be played loud, very loud.

Never mind the noise patrol, crank up the volume. Then enjoy the journey Sanders and his band takes you on. It’s a journey which  ‘sanders’ through the material and metaphysical worlds. Using instruments from around the globe – from Cuban drums to the Japanese Kato; the Sitar to the African drums; jazz to classical – Sanders creates a sound which is both exhilarating and profound. This is which shows black unity; shows the universal relationship of the black peoples of the world. His linking of the different cultures is a statement of the adherence to the Pan-Africanism politics which were emerging in the 1970’s following civil rights campaigns of the previous decade. This is world music before world music became the hobby of the whole middle classes.

Throughout the track, the sound manages to stay both precise for the individual instruments and yet is solid enough to allow them at times to merge and become one being: creating a new sound. Fuelled throughout by Stanley Clarke’s funky baselines the album starts slowly as if the fuse has been lit, then starts to flame with some Eastern percussion; a dance groove kicks in, which is a foretaste of the club jazz Sanders would get considerable success in the 90’s; then it’s a glorious cacophony. To quite Oscar Wilde – who it has to be said was not talking about 1970’s free jazz, but with AQ you get hifi and literature for your three quid – this is “chaos, illuminated with flashes of lighting”.

Side Two starts with some spirited piano from Joe Bonner, hurling shafts of energy from the clouds and then Sanders kicks up a storm (we might as well flog the weather metaphor as Mr Wilde has learnt it to us). The album closes as it has started, with Clarke’s booming out our speakers.

I cannot recommend this album enough, in my humble view, this is one of the finest free jazz records you can buy. Make sure you have one of these.