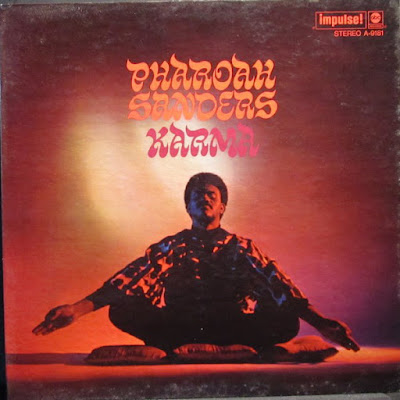 John Coltrane left behind a legacy of experimental and extremely spiritual work whose timeless quality still reverberates today. After his untimely death many poseurs came out to stake their claim as the next Coltrane. Many tried and many failed. Then in 1969 a former sideman of Coltrane's, Pharoah Sanders, stepped out from the shadow of his mentor and recorded Karma, which bore the soul of Coltrane's musical and spiritual passion.

Karma was released four years after his first record as a leader, Pharoah's First (1965). While working with Coltrane, Sanders began to develop an aggressive tone that ripped into an anarchaotic passion owing as much to Coltrane as Albert Ayler. His records as a leader did not always reflect the raw energy that would show up on Coltrane classics such as Ascension. His 1966 Impulse! debut, Tauhid, is a great example of this. Sanders let the work take on a generalized groove that worked with the mood created in each piece. In doing so, he created not only his best pre-Karma record, but one of his finest overall. After Coltrane's death, Pharoah worked with his widow Alice before setting to work on what would become Karma.

As with many records of the mid to late-'60s/early '70s, Karma is based primarily around the first of two album tracks, "The Creator Has a Master Plan." The track is one of the finest and best-executed and edited jams ever caught on record, though many critics would and will argue with that statement. The master plan of tracks on contemporaneous Miles Davis records like In a Silent Way or Bitches Brew was created by the editing and production efforts of Teo Maceo. Recordings like Free Jazz or Ascension, in contrast, worked by virtue of the way they tore down sonic and musical boundaries. Sanders incorporates these values into "The Creator," making it more than just a loose jam; no matter where Sanders goes, he is in total control. Even as the piece peaks into volatile eruptions roughly sixteen minutes in, he saddles the passion and works the track back into the initial groove that was comprised its first movement.

"Creator" comes in at 32:47 and wastes not a single note. Opening with a virtual rush of sound, it then quiets down and drops a brief riff from A Love Supreme. The tune then works itself into a groove that would later be known as acid jazz, working with Eastern percussion and allowing the bass to float close to the front of the mix. This first section relies on a modal two-chord structure that keeps the tone bouncy and meditative. At eight minutes Leon Thomas begins a chant-like vocal that varies lines from the mantra "The creator has a master plan, peace and love for every man." The vocals drop and the third movement becomes an unrelenting Coltranesque blitz that tears the mellow mood apart, only to combine the angst and mellowness in the next movement and settle back into a reprise of the first fourteen minutes.

"Colors," on the other hand, is a shorter and more structured piece that features some solid and well-executed chops. Again Leon Thomas sings, and Ron Carter takes over the duties of Richard Davis and Reggie Workman.

Love or hate the music of Pharoah Sanders, you cannot deny the man's vision after hearing this record. His is an absolute genius approach to arrangement and performance. Though Sanders would release many great records and even mellow his distinctive tenor sound down, Karma is a record that deserves to be heard by any serious jazz fan.
Posted by Zen Archer at 4:53:00 PM