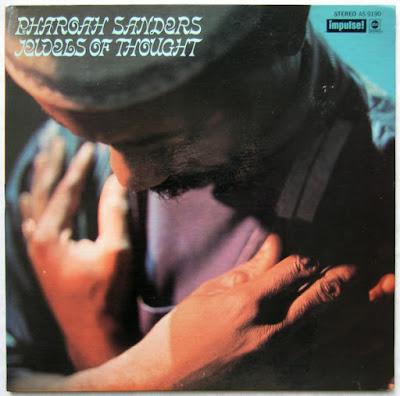 Jewels of Thought develops the dichotomy of Karma a bit further, with a benevolent love-in on the A-side and a somber, dissonant astral voyage worthy of Sun Ra’s Arkestra on the flip. Leon Thomas’ vocal contributions are, for many, an acquired taste. With his earnest monologue on “Hum-Allah-Hum-Allah-Hum-Allah”—about a “universal prayer for peace” where “all you have to do is clap your hands, 1-2-3”—and his propensity to yodel, he has about as much gravitas as a summer-camp counselor. If you liked what you heard on Tauhid and were hoping for more, this addition may blindside you—it’s no surprise jazz yodeling failed to catch on. Yet despite the lingering dweebiness of Thomas’ performance, the piece soars. By allowing soulful prettiness alongside more vicious passages, Sanders opens the album up, connecting the dots between joyful communion and unflinching catharsis. A squalling solo toward the end of the side sounds like a cry from the deepest, most tortured part of his soul, but it’s supported by an unerringly mellow piano accompaniment (and answered by still more yodeling, now comfortably chilled out in the back of the mix). It’s a moment of deep vulnerability in a genre can often devolve into macho blowing contests.

If “Hum-Allah” is the sugar, then “Sun in Aquarius” is the medicine it helps get down. After an intro of reedy, North African-cribbing winds, thumb piano, and gongs, it yawns out like a terrifying chasm before letting Lonnie Liston Smith’s piano boil over for the better part of five minutes. Sanders is in devastating form, screaming through his tenor. Even after a mid-side comedown and a breathtaking bass duet from Cecil McBee and Richard Davis, he leaps back in undeterred, firing out one of his heaviest solos like a machine gun.

In 1969, Pharoah Sanders was incredibly active, recording no less than four albums and releasing three. The band on Jewels of Thought is largely the same as on Deaf Dumb Blind and Karma, with a few changes. Idris Muhammad has, with the exception of "Hum-Allah-Hum-Allah Hum Allah," replaced Roy Haynes, and Richard Davis has permanently replaced Reggie Workman and Ron Carter, though Cecil McBee is still present for the extra bottom sound. Leon Thomas and his trademark holy warble are in the house, as is Lonnie Liston Smith. Comprised of two long cuts, the aforementioned and "Sun in Aquarius," Jewels of Thought sees Sanders moving out from his signature tenor for the first time and delving deeply into reed flutes and bass clarinet. The plethora of percussion instruments utilized by everyone is, as expected, part of the mix. "Hum-Allah" begins with a two-chord piano vamp by Smith and Thomas singing and yodeling his way into the band's improvisational space. For 12 minutes, Sanders and company mix it up -- especially the drummers -- whipping it first quietly down into the most pure melodic essences of Smith's solo and then taking the tension and building to ecstatic heights with all manner of blowing and intervallic interaction between the various elements until it just explodes, before coming down in pieces and settling into a hush of melodic frames and the same two-chord vamp. On "Sun in Aquarius," African thumb pianos, reed flutes, sundry percussion, and orchestra chimes are employed to dislocate all notions of Western music. Things get very quiet (though there is constant motion); the innards of the piano are brushed and hammered quietly before Sanders comes roaring out of the tense silence with his bass clarinet, and then the tenor and bass share an intertwined solo and Smith starts kicking ass with impossibly large chords. It moves into another two-chord vamp at the end of 27 minutes, to be taken out as a closed prayer. It's more like a finished exorcism, actually, but it is one of the most astonishing pieces by Sanders ever.
Posted by Zen Archer at 5:01:00 PM