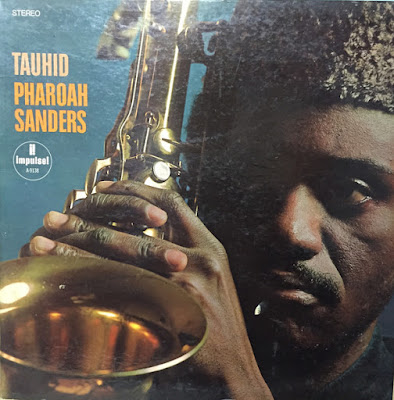 Conventional wisdom has it that saxophonist Pharoah Sanders' signature, late-1960s astral jazz recording is "The Creator Has A Master Plan" from Karma (Impulse!, 1969). But conventional wisdom is rarely to be trusted. Clocking in at an unhurried and mesmerising 32:45, "Master Plan" is certainly definitive Sanders of the time; yet "Upper Egypt And Lower Egypt," from Sanders' own-name Impulse! debut, Tauhid, recorded in November, 1966, is arguably the finest statement in his astral oeuvre.

At a relatively brief 16:16, "Egypt" has all the elements which characterised Sanders' astral excursions—explicit spiritual references, vocal chants, a rolling bass ostinato, "exotic" percussion, out-there but lyrical tenor saxophone, and extended vamp-based collective jamming—and crucially, was played by an edgier and more challenging band, including guitarist Sonny Sharrock and pianist Dave Burrell, than was assembled for Karma. The later album was made by a distinctly more blissed-out line-up, lacking Sharrock, in which the comfort-zone pianist Lonnie Liston Smith and vocalist Leon Thomas figured large.

With Tauhid, however, Sanders—at the time a regular member of saxophonist John Coltrane's band and revelling in his first album as leader since the sock-peeling Pharoah's First (ESP Disk, 1964)—was still stretching the envelope. Of all Sanders' Impulse! albums—he stayed with the label until late 1973, when he fell victim to cost-cutting imposed by corporate bosses ABC Records—Tauhid, produced by Bob Thiele, who also produced Karma before quitting Impulse! in the summer of 1969, also has the best sound.

"Egypt" takes a long time to get to the point, and therein lies much of its charm. Divided into two distinct sections, "Upper Egypt" and "Lower Egypt," the first part is a long, teasing introduction, always seemingly on the brink of resolving itself and giving way to the main theme, but avoiding doing so for almost 9 minutes. Henry Grimes' propulsive post-"Love Supreme" bass ostinato enters at this point, the tempo picks up and the vamp changes—but it's another 3 minutes before Sanders, previously heard only on piccolo, enters on tenor with the unfolding-sunrise main theme, which he reiterates, reconfigures and improvises around for the final 4 minutes, over a fat piano and percussion groove and Sharrock's raggedly crystalline chord work.

"Upper Egypt And Lower Egypt" is so perfect that the rest of Tauhid tends to get forgotten, but the four shorter tracks which complete the album, totalling another 18:08, are also magnificent. "Japan," inspired by Sanders' tour of the country with Coltrane's band in the summer of 1966, is as pretty as pink lotus blossom. "Aum" and "Venus," the first with Sanders on alto, are tougher and further out, before the concluding "Capricorn Rising" re-establishes the album's peaceful opening vibe.

Over the next few years, Lonnie Liston Smith, already worryingly jazz-funkish on Karma, played a key role on Sanders' albums, which became increasingly codified and formulaic. In retrospect, the first cut was indeed the deepest, and for many devotees Tauhid remains Sanders' astral jazz muthalode, and "Upper Egypt And Lower Egypt" his finest (quarter) hour.