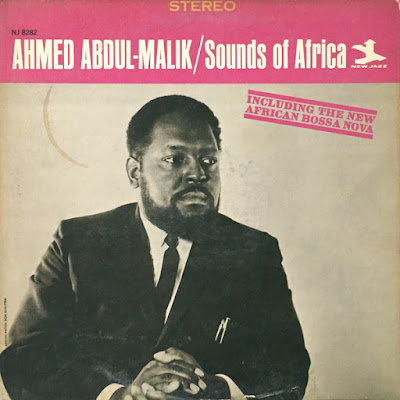 Ahmed Abdul-Malik played bass with Monk for a while (including on the At Carnegie Hall with Coltrane CD recently unearthed). He also can be heard on the sublime Complete 1961 Village Vanguard box set intermittently playing the oud with the classic John Coltrane quartet (which to me is a contender for the greatest music ever recorded). Despite these credentials, Abdul-Malik never achieved more than a moderate amount of recognition for his music, which is too bad considering how good this music on Jazz Sounds of Africa sounds. Right around the same time as the Vanguard recordings he recorded the music on this disc, which sounds equally as "out", and also very different, than what Coltrane was doing.

In fact, this music is so different I'm not really sure what to compare it to. Yusef Lateef was also experimenting with what could be called world fusion jazz, and 15 or 20 years later Don Cherry went there, but Ahmed Abdul-Malik was on his own path. This is music rooted in bop, but every song really goes in a different direction, most with a strong Middle Eastern and African influence. With the exception of Andrew Cyrille on drums, all of the dozen of so players featured on this CD are pretty much unknown to me. It's amazing that he was able to get so many great (but obscure) musicians together to record, and the solos sound inspired and creative throughout.

Sounds of Africa picks up where The Music of Ahmed Abdul-Malik left off:  the kind of song that you like but wouldn't be caught dead playing with your car windows rolled down.  Abdul-Malik takes his exploration of mixing Jazz with world music to new heights here, increasing the size of his band to include flute, another saxophone and more percussion.  His take on African Bossa Nova is different.  I prefer Duke Ellington's though:  Afro-Bossa.  "Nadusilma" is brilliant, the shock-value equivalent of "La Ibkey" from The Music of Ahmed Abdul-Malik.  The oud, percussion and trumpet blend together flawlessly.  "Out of Nowhere" doesn't match the title of the album.  Thankfully the next two song do.  Together, "Communcation" and "Suffering" form 16 minutes of a addictive rhythm to end the album.

A wonderfully entertaining set of music from one of jazz musics explorers. Along with the likes of Yusef Lateef Ahmed Abdul-Malik never simply played jazz music.He was forever exploring the music of the world and trying to incorporate it into the world of jazz.His real love was the music of Africa and he made several LP's based around African themes.This one also features a smattering of Brazilian bossa-nova mixed in as well.Mlik plays bass and oud,Tommy Turrentine adds his trumpet and a large drum section features heavily.Violin also features adding an eerie mournful tine at times.This is simply great music and the combination of jazz and various world rhythms works so well.Being a bassist no doubt helps Malik further appreciate the rhythmical structure of the continents music.A very good LP that should not be dismissed as a gimmick.This is proper world music long before it became a fashionable genre for the masses.