Ahmed Abdul-Malik
1961
The Music Of Ahmed-Malik 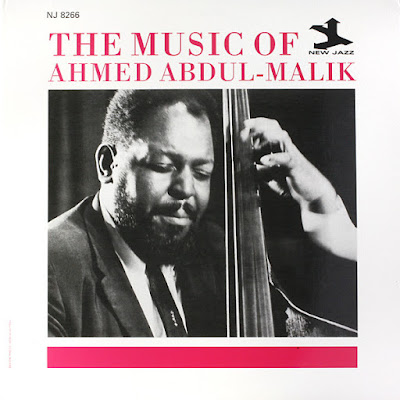 This jazz musician of Sudanese descent shows up here and there on recording sessions from the '60s, including a stint as a member of Thelonious Monk's combo. He also played oud and took part in a variety of attempts to blend his roots music with jazz, out of which this is one of the most successful. Indeed, one might overlook the entire fusion nature of this record and look at is as a prime example of how much brilliant jazz is created often by relatively unknown players, despite traditional historical attempts to credit most of the best jazz to a certain pantheon of so-called "giant" players. The best-known player here is drummer Andrew Cyrille, recorded here early in his career, playing in a more traditional style then he would eventually become known for and playing very well to be sure. The leader's original tunes are catchy and refreshing, revealing new delights with each listen. The version of the standard "Don't Blame Me" is a wonderful showcase for another undersung player, cellist Calo Scott. Of course the usual credit should go to recording engineer Rudy Van Gelder, whose efforts recording small combo jazz have never been matched.

Ahmed Abdul-Malik's famous for being part of a Thelonious Monk group that included John Coltrane.  After hearing this you'll wish that Ahmed Abdul-Malik had joined forces with Yusef Lateef to form a massive ensemble that fused world music and Jazz.  He's not quite the multi-instrumentalist that Lateef is but his skills on bass and a guitar-like instrument called the oud are phenomenal.  I get chills up and down my spine imagining an oud/oboe blues duet between them.  Because he is primarily a bassist, Abdul-Malik's composition are highly rhythmic.  Much of the time there's less emphasis on horns and reeds.  Tommy Turrentine certainly plays some fantastic trumpet when he gets a chance.  "La Ibkey" is easily one of my favorite exotic Jazz songs.  The only reason that "Don't Blame Me" sounds remotely foreign is that it features cello.  "Hannibal's Carnivals" could be less cheesy and dated.   What really threw me off is that it's strange to hear free-jazz drumming legend Andrew Cyrille play this kind of music.