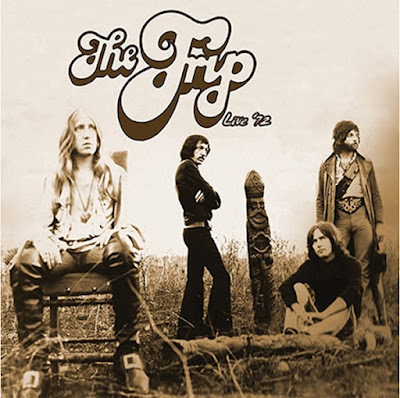 
One of many English bands coming to Italy in search of success during the beat-era, The Trip, included a young Ritchie Blackmore in its first line-up, along with founder members Arvid "Wegg" Andersen, Billy Gray and drummer Ian Broad. A line-up change brought two Italians in, keyboard player Joe Vescovi (later the leading figure in the band) and drummer Pino Sinnone. 'Live '72' captures the January 1972 performance at the Piper in Rome, the last concert with the historical line-up. This unpublished document is evidence of the energy and power of one of the best bands in Italy's '70s prog scene.
Posted by Zen Archer at 3:31:00 AM 1 comment: 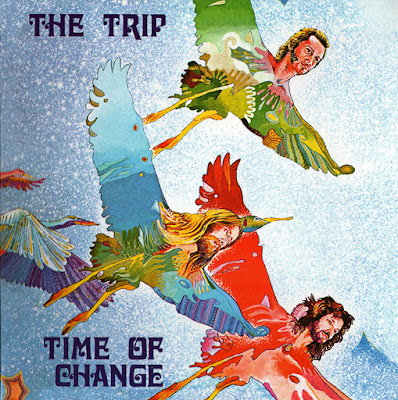 
1973's "Time of Change" was their final album, by which they were no longer recording for RCA, but for Trident, a small, independent Italian label best known for giving us the likes of SEMIRAMIS and BIGLIETTO PER L'INFERNO. The band at this point consisted of keyboardist Joe Vescovi, bassist Arvid "Wegg" Andersen, and drummer Furio Chirico, all credited to vocal duties. It's Andersen who was there from the beginning when they were residing in England (although I suspect Arvid "Wegg" Andersen was Danish-born, given his name). If the name Furio Chirico sounds familiar, well, the next band he was in was ARTI & MESTIERI. He was also on their previous album, "Atlantide", but not their previous two ("Caronte", and their self-entitled 1970 debut).

Don't expect fusion-oriented prog like you do ARTI & MESTIERI, expect keyboard- driven prog, with some ELP influences. The album starts off with the side- length "Rhapsodia". Here you get treated with lots of Hammond organ, piano, Eminent, and synthesizers. A lot of the music tends to be a bit on the cheery side, which threw me off. The vocals tend to be on the hard rock side. And while the song titles are in Italian, they are sung in English. I don't really detect an accent. What's known is the vocals are often in the hard rock vein. When Joe Vescovi played piano, it was often in the ragtime style, like what Emerson did on "Jeremy Bender", "The Sheriff", and "Benny the Bouncer". The organ in the music is often ELP-like. The lyrics are a bit on the cheesy side. And if you enjoyed Chirico's drumming on ARTI & MESTIERI, you'll enjoy it here, as he often plays just as fast, often hard telling the difference between a roll and a fill. "Formula Nova" is a totally amazing instrumental demonstrating the finest quality of this band, where the intensity doesn't let up. "De Sensibus" is a bizarre experimental piece, dominated by percussion. "Corale" is a classically-influenced number, while "Ad Libitum" is a instrumental, jazz-influenced piece, dominated by piano (played in the normal fashion).

Not exactly essential, but worth having if you're an avid Italian prog collector. 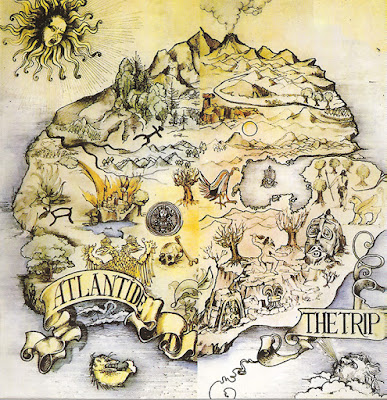 Everyone of us have our personal stories about how we discovered a band or an album or a song in particular, i, personally like to share those stories when writing a review. So about 1 year ago i was lurking on a local website where we can sell/buy (kind of an ebay) things, i found a seller offering some of his prog albums, i remember there was some VdGG, Soft Machine etc, and the name of The Trip appeared, i had heard only one song of them in a compilation named Il Pop Progressivo, but didn`t catch my attention, when i got interested was when i read the description of the band made by that seller, among some things, he said that Ritchie Blackmore was the founder guitarist of the band, that only fact caught my attention and of course i searched for The Trip`s music.

So believe it or not, The Trip`s first guitarist was the same Ritchie Blackmore we all know, and that led me to discover that this was not actually an Italian band, but an English one which went to Italy searching for better luck. They had released The Trip and Caronte both very different to each other, and their third effort was Atlantide when a legendary Italian drummer named Furio Chirico joined the band, and Joe Vescovi took the leadership of the band, i believe this was their pinnacle and most succesful moment.

The album is pretty short actually, just half an hour of music, but nice music of course and featuring 8 songs. It opens with the self-titled song Atlantide, a strong keyboard driven song which shows since the very first moment the leadership of Vescovi, the music will remind you immediately to ELP, the style is pretty similar. Evoluzione features vocals for the first time, english lyrics so its not the typical vocal of an italian band, i mean the characteristic RPI vocal style. This song shows a psychedelic touch in the non-vocal moments, reminding me a bit of Eloy. Leader starts again with those lush keyboards, then Chirico`s drumming and Andersen`s bass appear, and this now reminds me to The Nice, not ELP but The Nice. Energia has a great sound, when you have so good musicians the result will be great, actually what i least like on the album are the vocals, this is an instrumental song again with a psych feeling and may sound as a movie theme, keyboards takes all the attention. Ora X in this song the vocals return with a rockier feeling, ala Lonely Hearts Club Band, the last minute of the song is a powerful ending, though it fades out very softly. Analisi starts with a piano intro, then the vocals and a church organ along with some kind of funeral drumming, after a couple of changes, it returs to the same style and finishes stronger. Distruzione the longest track and without a doubt best one, the first minute is just some background noises, then it becomes stronger and it has a crescendo with the superb Chirico`s drumming, then after a silent moment, bass enters and keys after it, the sound is again very ELP like, this song may be divided in various movements since it has several rythm and time changes, there are some moments that may sound just like an improvisation. Il Vuoto, this is simply the outro, just one minute of keyboard music, the goodbye of the Atlantide.

It is a nice album, but not outstanding nor very complex, it didn`t provokes the same satisfaction as some other albums, give it a try, you may like it more than me, also i`d like to warn you, if you are looking for italian symphonic prog or rock progressivo italiano (whatever concept you have in your own mind) this is not what you would expect. Now i would give it 3 stars, just good but non-essential. 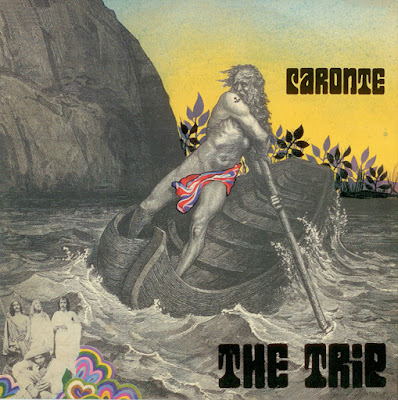 Obviously one Italian album looking towards the British isles and not just for the music influences, but in its artwork also, but with good reasons since a good part of the members are British, with even Ritchie Blackmore (!!) being a one-time member. Your standard rock quartet with an impressive duo upfront of Vescovi (vocals and KB) and Grey (guitars), the group alternates between Vanilla Fudge (Stein(s organ sound) and The Nice.

A usually short Italian classic (just over 30 min), the album is quite impressive but at the same time awkward in its mix of influences and musical spectrum. Some rather weak track (Little Jamie) is rubbing shoulders to real excellent epics (Two Brothers and the first title track), whilev the other major track Ultima Hora E Ode A Hendrix is an uncomfortable almost-plagiarism to the great master of the XIXth century. This leaves the brilliant interplay between the two soloists, but unfortunatel guitarist Grey will leave at the end of the album, taking with him the drummer. Grey will not be replaced, but Furio Chirico (of Arti e Mestieri) will step in and the group will veer towards jazz-rock for their remaining two albums.

Although hardly flawless (being typically excessive like only our Italian friends can be ;-) Caronte is one of the most influential Italian prog albums, and is a must to understand how the country became a powerhouse in progressive rock during the 70's.
Posted by Zen Archer at 3:13:00 AM 1 comment: 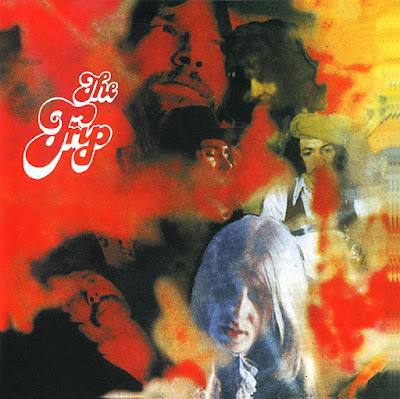 The band was established in London in 1966, when Riki Maiocchi of I Camaleonti fame decided to create a new band to explore the new opportunities brought about by the advent of psychedelic rock. In London, Maiocchi had met with Ian Broad, who joined in Maiocchi's project; they also recruited Ritchie Blackmore (on guitar), Arvid "Wegg" Andersen (bass and vocals) and William Gray (also on guitar). The band debuted in Italy as "Maiocchi and the Trip". Blackmore left in December 1966 and returned to London where he continued as a session musician until 1968 when he joined Deep Purple. He was replaced by Luciano Galdolfi. When Gandolfi, Maiocchi, and Broad left, new and fundamental additions were made to the personnel, namely Joe Vescovi (keyboards) and Pino Sinnone (drums).

In 1970, the band (who had been renamed "The Trip") signed for RCA Italiana, releasing their first, eponymous album. At the time, progressive rock was still not clearly defined as a genre; The Trip is in fact a rather traditional rock and blues album. Also in 1970, the band was featured in a surrealistic Italian movie by the title Terzo Canale: Avventura a Montecarlo.

With such a name and such a title, you can easily imagine which type of music this Italian band is playing. Pure psychedelic glory of course!
And I have to say that it is quite enjoyable to the ears of yours faithfully. Totally early Floyd oriented, this album is sung in English (when vocals apply).

The opening number, which is an instrumental, is a highlight of this album. More A Saucerful Of Secrets oriented I would say: it is demoniac psychedelia from the good old days. With "Incubi", the band gets back a bit more in time, and the sound is more "Piper" oriented. Instrumental passages are quite well performed but the vocal parts are not that great (but this is general remark as far as I'm concerned).

"Visioni dell'Aldilà" is a weird track in its early stages (but Roger said about ASOS that it couldn't be called a "song"; so?). Vocals are better than usual; but there is no structure in this song. Themes are changing all the time: so be prepared for quite an experience! What a ride!

At a certain moment ("Rifflessioni"), the band doesn't seem to know in which direction they want to go. This song is a pitiful melting pot of several influences (mainly pop, boogie, AND decadent music).

The closing number is a childish pop/psyche song which sounds quite outdated (but hey! This was released in 70). All in all, I quite like this album.
Posted by Zen Archer at 3:09:00 AM 1 comment: