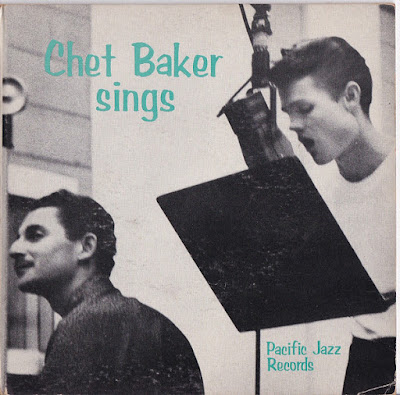 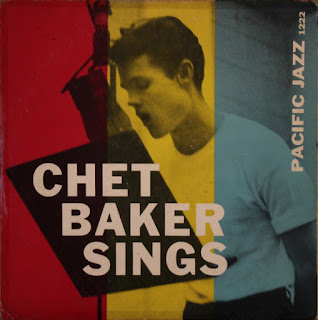 As Gerald Heard's liner notes point out, it's difficult to decide whether Chet Baker was a trumpet player who sang or a singer who played trumpet. When the 24-year-old California-based trumpeter started his vocal career in 1954, his singing was revolutionary; as delicate and clear as his trumpet playing, with a similarly bright and vibrato-free tone, Baker simply didn't sound like any previous jazz singer. His first vocal session, recorded in February 1954 and covering tracks seven through 14 of this disc, is so innocent-sounding it's like cub reporter Jimmy Olsen had started a new career as a jazz singer. The album's first six tracks, recorded in July 1956, are even more milk and cookies, thanks in no small part to syrupy material like Frank Loesser's "I've Never Been in Love Before" and Donaldson/Kahn's drippy "My Buddy." Choices from the earlier session like "My Funny Valentine" -- arguably the definitive version of this oft-recorded song -- and "There Will Never Be Another You" work much, much better. The spacious musical setting, a simple trumpet and piano-bass-drums rhythm section, is perfect for Baker's low-key style. Despite the few faults of song selection, Chet Baker Sings is a classic of West Coast cool jazz.
Posted by Zen Archer at 6:52:00 PM 2 comments: 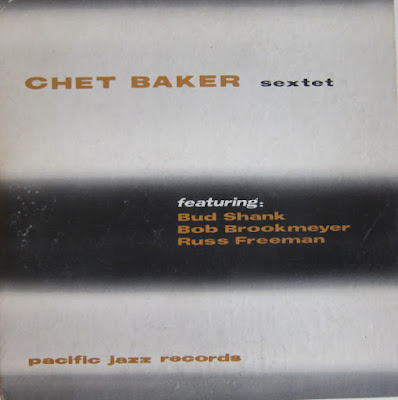 
Chet Baker Sextet features tracks recorded by trumpeter Chet Baker in 1954 and 1957 for the Pacific Jazz label and released over the years on various albums, including the original Playboys date. These are stellar "West Coast"-style tracks reminiscent of the small group work Baker did with saxophonist Jerry Mulligan and featuring first class arrangements by Jack Montrose and Bob Zieff. However, the Zieff cuts feature an unusual for the period chamber-style group with French horn, bassoon, cello, bass clarinet, and bass. The result was softly angular and very modern for the time. Interestingly most of the tracks have remained largely unavailable until this collection. While there are far more influential Baker albums from the '50s, Sextet is a beautiful album and a must-hear for Baker aficionados.

My initial introduction to Chet Baker was via one of his many "Sings" albums and it was an immediate turn off. So for years despite the critical acclaim, I neglected a true jazz masterpiece like "Chet." Well I have since come around to enjoy some of his efforts, including the fine discs he made for the Pacific label with Gerry Mulligan and Art Pepper, and this recently reissued title "Sextet." Tracks 1-8 comprising the original LP are from two September 1954 sessions featuring Chet on trumpet, Bob Brookmeyer on valve trombone, Bud Shank on baritone sax, Russ Freeman on piano, Carson Smith on bass and Shelly Manne on drums. The selections are arranged by Jack Montrose, Johnny Mandel or Bill Holman, and needless to say the playing is tight! The remaining four tracks come from a "lost" December 1957 date featuring a drumless unit of Baker, Jimmy Buffington on French horn, Gene Allen on bass clarinet, Bob Tricarico on bassoon, Seymour Barab on cello and Russ Savakus on bass. Pianist Bob Zieff arranged these modern jazz chamber works, and they are quite interesting. In all, after hearing solid albums like this one by Chet Baker, I am happy to finally "sing" his praises.
Posted by Zen Archer at 6:42:00 PM 1 comment: 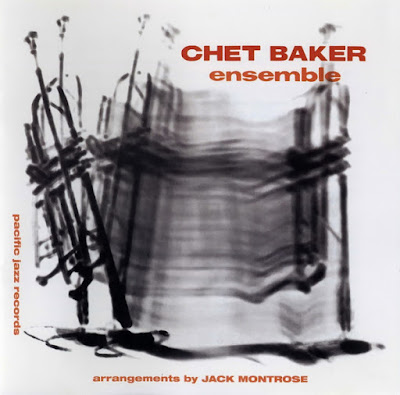 Chet Baker Ensemble collects all the tracks recorded by trumpeter Chet Baker and his group on a session for Pacific Jazz in late December of 1953. Having been released piecemeal on various albums over the years, this represents the first complete gathering of this material. Recorded less than two months before the legendary Chet Baker Sings sessions, these tracks showcase the young Baker as a hardcore jazz trumpeter before the public became overwhelmingly infatuated with his unique vocal abilities. Featuring first-rate "West Coast"-style arrangements by tenor saxophonist Jack Montrose -- who also composed many of the songs -- the septet seems to combine the jocular interplay of Baker's work with saxophonist Gerry Mulligan with the hip, swinging work popularized by the large ensembles of trumpeter Shorty Rogers. Besides Montrose, backing Baker here are saxophonists Herb Geller and Bob Gordon, bassist Joe Mondragon, drummer Shelly Manne, and pianist Russ Freeman. Rating alongside the best of Baker's catalog, Chet Baker Ensemble is a must-hear for both longtime fans and neophytes of the iconic trumpeter/vocalist's work.

Cool moody work from Chet Baker – a very unusual set that has him blowing with a larger group than usual! The set's real star is Jack Montrose – the great west coast arranger who had a perfect talent for taking horns and locking them up tight to create a sound full of gloss and surprise! Montrose plays tenor sax on the set – in a three sax section that also features Herb Geller and Bob Gordon – and the rest of the group includes Russ Freeman on piano, Shelly Manne on drums, and Joe Mondragon on bass. Chet's work is great too – but the real appeal of the set is the Montrose-styled groove – very nice all the way through!
Posted by Zen Archer at 6:34:00 PM 1 comment: 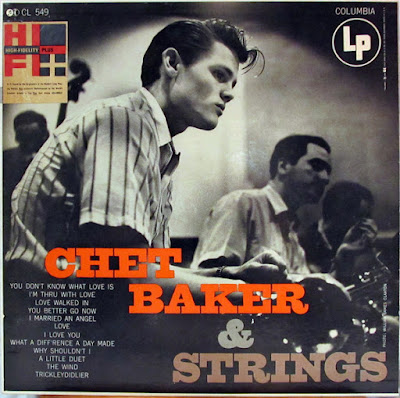 Released in The Netherlands and Italy as Chet Baker With Strings in 1956, and in Canada and the USA by the Harmony label in 1964 as Love Walked In 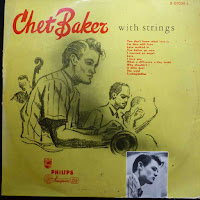 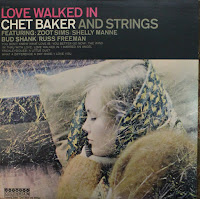 This release offers a unique glimpse of a young Chet Baker in a quintet setting, complemented by a nine-piece string section. Utilizing the uniquely modern arrangements of Johnny Mandel, Marty Paich, Jack Montrose, and Shorty Rogers, this interaction of "West Coast cool" with primordial elevator music escapes many -- if not indeed all -- of the potential sonic pitfalls such a marriage might suggest. In the truest sense of the word augmentation, the string arrangements provide the desired opulence sans the heavy-handed or syrupy residual effects. Perhaps most inspiring about this outing is the success with which Baker and crew are able to thrive in this environment, providing subtle insight into the quintet's ability to simultaneously adapt and explore. Chet Baker and Strings was recorded over three days in late 1953 and early 1954. Joining Baker (trumpet) on these sessions are Jack "Zoot" Sims (tenor sax), Jack Montrose (tenor sax), Russ Freeman (piano), Joe Mondragon (bass), Shelly Manne (drums), and Clifford "Bud" Shank (alto sax), who steps in for Sims on the 1954 date. "Love Walked In" incorporates a trademark volley of interaction between Baker and Sims. "Love" contains what is arguably the most successful implementation of the string section, as well as some stellar soloing by Freeman. In fact, his contributions to this particular recording rank among his finest with Baker and company. The same enthusiasm can likewise be applied to "A Little Duet for Zoot and Chet." Not only are Sims and Baker in top flight, but the string arrangement swings irresistibly as well. The easygoing and otherwise winding strings support the cool bop like a kite in a March breeze -- light, airy, and conspicuous only in altitude.

"When Chet Baker joined Gerry Mulligan's pianoless quartet in September of 1952, he was a mere twenty-three years of age practically unknown in the music world. The young musician's jazz conception was so strikingly original, his sound so pleasing and intimate, that international recognition of his talents came in a short time. One year after his first record release he was voted the country's best jazz trumpet player in year-end popularity polls conducted by both Down Beat and Metronome magazines. This was unprecedented; no musician in the history of either poll had come from obscurity to the coveted first place position in less than one year." ~ Mike Zwerin ~

It's not easy pulling together great musicians such as tenor sax players Zoot Zims and Jack Montrose, alto saxophonist Bud Shank, pianist Russ Freeman, bassist Joe Mondragon, drummer Shelly Manne, fine arrangers Johnny Mandel, Marty Paich and Shorty Rogers to record a beautiful album, but Chet Baker made it happen with "Chet Baker & Strings." When it comes to trumpet playing, he was an institution. He was one of the best trumpeters of all-time and this album is a testimony of his remarkable talent that was never unappreciated by his fellow musicians and many jazz lovers as well.

Baker and the regular musicians are backed by a nine-piece string section that utilized six violins, two violas and a cello making all the tunes so "pleasing and intimate." The last three alternate takes are bonus tracks and not included on the original LP record that was produced in 1954 by Columbia Records.

To my ears, some of the loveliest tunes from this set include George Gershwin's "Love Walked In" executed in such a beautiful rendition with an enchanting arrangement scored by Marty Paich, a graduate of the Los Angeles Conservatory of Music who is not only recognized as a fine arranger, but also a talented jazz pianist. He worked with Peggy Lee as an accompanist/arranger for many years.

You'll also be enthralled with Cole Porter's "I Love You" done in a breezy and smooth flowing arrangement by Johnny Mandel, a brilliant composer/arranger/musician who attended the prestigious Manhattan School of Music and Juilliard School of Music who also wrote the charts for the equally impressive melodies of "You Don't Know What Love Is," "The Wind" and "Love."

Shorty Rogers wonderful chart arrangements on "What A Diff'rence A Day Made" and "I'm Through With Love" have elevated these tunes into a greater degree of appreciation. Also one of the best tracks is "You Better Go Now," a hauntingly beautiful melody by Graham Reichner made more lovable with Jack Montrose's noteworthy chart arrangement.

I'm a huge fan of strings that's why I truly enjoy listening to this CD, one of the most remarkably romantic Chet Baker recordings that is worthy to be added to your music library. Give it a listen and enjoy!
Posted by Zen Archer at 6:28:00 PM 1 comment: