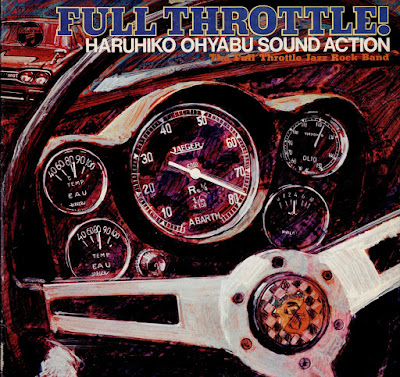 Here's a stunning libraryish unknown from the vaults, hidden from our modern eyes from almost half a century ago, and if you glance at the database page you might, like me, begin to 'salivate like a Pavlov dog' at the contents hidden therein-- I mean, we've got jazz-rock representations of famous muscle cars of the sixties-- oh man!  First, look at the amazing cover art.  Think of how nice that would feel to hold a steering wheel made of steel with that triangular configuration like those old plastic 1.5" 45 rpm adapters that would stay inside each single...  and don't ever forget the rifle and handgun.  What? weapons?  Like, yeah, why not? You're not gonna pack a pistol in the glove compartment of that Alfa Romeo?

Let me now show to the world this treasure, left neglected in some old basement (complete with functioning bar and pool table presumably) never heard by humans until today, ready for the light like a lost Matisse at Christie's of the apocalyptic hard rock revolution.  It's a slice of Datsun-Japanese Americana that speed reads all over the great interstates of the US of A with a go-go hyperactivity made musical in wailing sax-led bang-on jazz jam sessions like the hellraising soundtrack to a dusty road trip through whorehouses and Louisiana swamps where men will play the banjo and load a shotgun with the same hand, maybe because they only have one arm (gator got the other)...  Oh look there's Mancini's Pink Panther run over by a Chevy Corvair, there's the Roadrunner at-long-last blown to fuzzbox smithereens by that acme improvised fusion device on the Sonoran Desert road, along with the martyr Roadkill E. Coyote.

Oh yeah, it's a legitimate representation of sixties-seventies zeitgeist fit for time capsule consumption by those cosmonauts, those paleontologists of the future, post-anthropocene, who will quizzically examine this beastly vinyl tyrannosaur and wonder, what the hell do jazz-rock and sports cars have to do with each other???  At least, until they pop the 8-track into the working "Shelby Cobra" and fall back down into that daredevil canyon where the bottom rocks are 3 billion years old and the rock 'n' roll is eternal...

You'll see on discogs that only one copy is available, and it's never been sold before-- talk about a rarity!  We're lucky to get a taste.   Here's one that I suspect will be worth in the multi-hundreds to a thousand in a year or two.

This review was shamelessly copied from another blog that wouldn't put a download link due to the value of the record... we say... Fuck that shit... music shared is happiness shared (Plus the whole thing has been up on youtube forever)... enjoy motherfuckers!

By the way I would love to have some more information on this album... who played on it... more about it's background... thanks in advance!