Led Zeppelin
2018
How The East Was Won 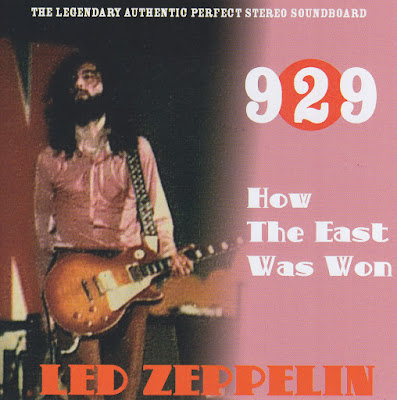 
Empress Valley started releasing snippets of the famous 929 concert earlier this year in fabulous soundboard quality, these tantalizing tidbits forever laid waste to the assumption that the tapes were of poor quality and the master tapes wiped clean. After the pre release torrent of the Seattle March 21, 1975 soundboard last year, EV decided that they had to have some control of future releases of such important material. In February 2018 the label released Immigrant Song as a single, followed by Stairway To Heaven and Friends a few months later and needless to say Zeppelin message boards everywhere were buzzing with the possibility. Finally on September 29 of this year to coincide with Led Zeppelin’s 50th anniversary, EV presented the release everyone was waiting for, September 29, 1971 from the true soundboard source. “Oh-Show”, “Geisha”, and “How The East Was Won” were three different packages with three different price levels, the higher the price the more extras you get. This release did not come at a good time, I could not justify even the lowest price level based upon what was offered. You could imagine my surprise when my favorite bootleg vendor emails telling me he had a review copy of the Eelgrass version for me, whoo hoo! This actually brought a bit of a conundrum, I do want to get the EV as I believe they need to be compensated for their investment but it could be a few months before I could swing it, so I welcomed his gift with much enthusiasm.

As I waited for this title I read many a posting with the pros and cons of how EV released this material, their release did not contain Stairway To Heaven or Friends and if you subtract Immigrant Song, it’s a bit over 70 minutes of new music. But my final opinion is this, Empress Valley is the only label releasing new to circulation soundboards, their long running “Soundboard Revolution” series has seen a release or two per year for how long? So many fantastic releases from 1975 and 1977 not to mention the Orlando 1971 years back, if people don’t buy it, the trolls who post their comments would not have anything to bitch about (or most certainly download for free). Enough of my soapbox, let’s get to it.

There have been a few previous soundboard recordings from 1971, Hampton, Orlando, and the Toronto fragment and to me they sound great but lack true fidelity. This my friends, sounds incredible. This recording is a perfect balance of instruments and vocals, if anything the audience is low in the mix. The drums and bass sound incredible, if you are like me and are used to the old soundboard, hang on as this is what we dreamed the real tapes would sound like. There is just a small amount of hiss as one would expect but all in all this is not only THE best soundboard from 1971, it rivals the best from 75 and 77. The sound is fully three dimensional and has wonderful dynamics, turn this up loud and get ready for a hell of a ride.

As with all that is positive, there are some things that will certainly bum you out. First off all between banter has been removed as has the false start of Dazed and Confused. There is a tape cut at 28:08 of Dazed missing a couple minutes but thankfully we get a full incredible sounding version of Pennies From Heaven. Much of the acoustic set and one of the greatest Whole Lotta Love’s is also missing, many including myself feel the label has the complete recording and will release more in the future, but if this is all we ever get, no worries and the sound quality and performance are impeccable.

As great as Immigrant Song and Heartbreaker are, Since I’ve Been Loving You is jaw dropping in its intensity, so clear and powerful it is simply a moving experience just listening, lights down low, eyes closed just taking it all in. Three minutes into Dazed and Confused and my floor is vibrating from the bass frequencies yet I will not turn it down, the journey is just beginning and while I have heard this hundreds of times, it is completely new. The bow solo is exquisite, Plant’s moans haunting and one imagines scaling a cliff at dark to see the Hermit. Jones and Bonham start the drive and Page enters ala Hendrix with some tasty flashes of Wah and just rips into the fast section without abandon, I cannot describe the rhythm section, you need to hear, and feel it. Pennies From Heaven is so clear and I find myself waiting for the audience patch, and after its gone I feel that the interlude was more effective and moving than I ever assumed.

What is most interesting is the sound of Stairway To Heaven when compared to the rest, while it is certainly 929, it has as different timbre as well as a slightly different mix, Robert’s vocals are extremely clear as is John Paul Jones’ Fender Rhodes and is very interesting to hear in such clarity…wait ‘til Bonzo enters, if your stereo is at the level mine it, hold on. Friends, to have this rarity in such a clear recording is such a treat…Eelgrass certainly could have done a better job with the transitions of these two songs, there are loud digital pops at the track cues. For What Is And What Should Never Be we are back to the original sound quality, one wonders if they had multiple tape machines running to overlap the tape flips so no music is lost. Moby Dick is not complete and clocks in at 10:33, the beginning is very muscular, just prior to the coda, the sound is not as clear.

The encores are a treat, especially the great Communication Breakdown, very loose playing by the same yet cohesively entertaining as Page free forms it. A superb Rock And Roll was the final encore of the evening, a superb straight forward version, loving the “oooh yeah…oooh yeahs” from Plant and the band sounds so relaxed after the marathon three hour performance. Another loud digital pop leads us into the bonus track Black Dog from the previous evening September 28, at the same venue. This was let out in 2016 as sort of a teaser that was never really followed up on. First thing you hear is the use of noise reduction or compression as the slight metallic sound is instantly heard. The sound of this track is rather harsh after listening to the previous recordings being so nice and warm. Nonetheless the sound is perfectly balanced and an excellent recording that sounds like the levels were jacked up a bit. Brilliant version of Black Dog, Pagey’s playing is confident and very fluent and one wonders is there is more of this recording coming in the future. Most interesting is that we get the full crowd noise between Black Dog, Plant’s introduction and Jonsey’s first couple of bass notes to Dazed And Confused.

The packaging is simple, a jewel case with inserts adorned with pictures from the event, the front cover is rather cheap looking and certainly not worthy of such a recording as found inside. Unbelievable that we have this material, this concert has long been a fan favorite, and to have the soundboard and the Mr. Peach recording all in one year is too much. A stunning performance and certainly one of the most important recordings to surface in quite some time…you need this!
Posted by Zen Archer at 11:26:00 PM 1 comment: Links to this post