Fela Ransome-Kuti And The Africa '70 with Ginger Baker
1971
Live! 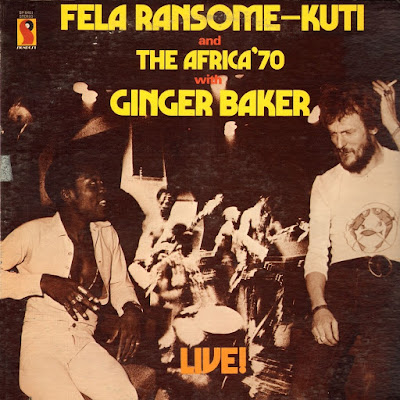 Quite a historic album - was this the first time a major Western music star joined forces with a non-Western music star on the latter's home turf? It might well have been. Back in the day Ginger Baker was very much a household name, having recently been part of a Top-5-in-popularity group (Cream). This album was made well before McCartney ventured to Nigeria to record Band on the Run, and 15 years before Paul Simon made the seminal Graceland with South African musicians. I believe it also predates musical visits to Africa by folks like James Brown, Bob Marley and Miles Davis.

It's easy to criticize having Baker so prominently featured on the sleeve as a "marketing ploy". But think of what that accomplished: it brought Fela's music to a large new Western audience who wouldn't have thought to try it otherwise. Which was an early step in a change to global culture that's still happening to this day. Sometimes a "marketing ploy" can be a very good thing.

The music on this album is quite timeless and excellent, and is very well recorded. Yes a lot of it is instrumental and solo-y, but it always maintains an infectious groove that makes for an enjoyable listen. There's lots of great melodies and smart arrangements. Baker never tries to show off; he integrates well with the band and is totally professional throughout. You can choose to listen actively to this CD or just treat it as background music - either way it's highly likeable.

This album was my introduction to Fela Kuti's music. I bought this album on a whim; it looked like it would be good. I'm also a Ginger Baker fan. I didn't know what I was in for. I've never been happier with a purchase of an album that I didn't know. Many compare this to James Brown, and where Fela was certainly influenced by Brown's funk, this seems so much more aggressive. It is a wonder how such a large band can be so tight, and sound so lean. Fela's got a great voice with tons of character that somehow displays anger and humor in the same phrase.

Every time I listen to this album, I fall in love with it all over again. It may not be Fela or Ginger's best, but it ranks very high in both their catalogs.
Posted by Zen Archer at 12:08:00 AM 1 comment: Links to this post