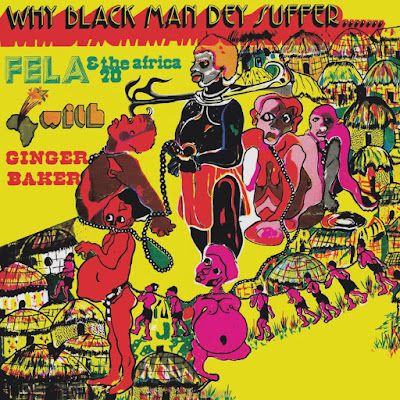 Initially recorded for EMI, but EMI refused to release it.

Why Black Man Dey Suffer is a more formative affair. It's one of a series of early 1970s' albums which made the transition between the highlife and jazz blend of Kuti and Allen's first band, Koola Lobitos, and the turbulent magnificence of mature Afrobeat. Trumpeter Tunde Williams, baritone saxophonist Lekan Animashaun and first conga player Henry Kofi, from later line-ups including that on Alagbon Close, are also in place. But Afrobeat's signature tenor guitar has yet to be introduced, and, crucially, Allen didn't play on the session, making way for Ginger Baker.
Baker does a creditable job on Why Black Man Dey Suffer, although Allen's absence means Africa 70 lacks the singular rhythms that would come to define Afrobeat a couple of years later. But the album is worth hearing, with powerful lyrics and some strong instrumental performances. A valuable snapshot of Africa 70's fetal stage.
Posted by Zen Archer at 11:40:00 PM 1 comment: Links to this post 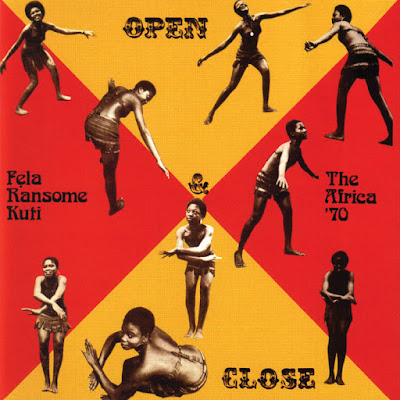 Fela doesn’t seem to have as a much on his mind on Open & Close—a new dance and people who don’t do their jobs correctly dominate the discussion—but there’s a lot happening in the music. The most significant change occurs in the guitar chairs, as Fela employs two guitarists for the first time (Tutu Srunmu on rhythm guitar, Ohiri Akigbe on tenor guitar) to give the arrangements an added texture and richness. Fela also contributes a lot of musical ideas on top of the music with his loose, semaphore-styled keyboard playing. (Is it just me, or does he sound like he’s wearing mittens when he plays?) If Na Poi was a step back in terms of musical development, Open & Close is clearly a step forward. The opening moments of “Swegbe And Pako Part 1” slow down the Afrobeat sound and arrive at something completely new, before pursuing a more distinctive groove, and it’s this kind of experimentation that makes Open & Close an exciting discovery for Fela’s fans. With some lineup tweaks along the way, Africa ’70 had grown even stronger; bass player Ayo Azenabor, while not as pronounced as his predecessor, has a certain nimbleness that blends nicely with the sounds around him. The closing “Gbagada Gbagada Gbogodo Gbogodo” is the only overtly political track, recounting a military uprising against colonial rule, but even here the mood is upbeat and light on its feet. The pervading feel on Open & Close is one of confidence and professionalism. Some of Fela’s albums felt like hurried first takes. Open & Close, by contrast, feels well rehearsed and is nearly perfectly executed. Here, the music takes center stage while the politics take a brief rest, resulting in one of his most refreshing records.

Another long-thought-lost gem from the Fela Anikulapo Kuti archives, Open & Close was originally released in 1971 and, in the manner of He Miss Road and Fela's London Scene, is a total groove-fest loaded to the gills with raucous horn blowing, ferocious percussion (once again, Tony Allen take a bow), and song lengths over ten minutes. By this point, Fela could do no wrong when it came to recording; Afro-beat dissenters will claim that there is a trance-inducing similarity to much of Fela's '70s recorded output, that the grooves aren't enough to make the songs distinctive enough on their own. That's true of some of his later recordings (like in the mid- to late '80s), but at this point he was still breathing fire and the band was in top form. Perhaps the distinguishing factors of records like Open & Close and some of Fela's other '70s releases are that as much as he liked to ride a groove, he also liked to disrupt it, twist it and turn it, reshape it, only to bring it back to its original shape. There was less of that later in his career.
Posted by Zen Archer at 9:09:00 PM 1 comment: Links to this post 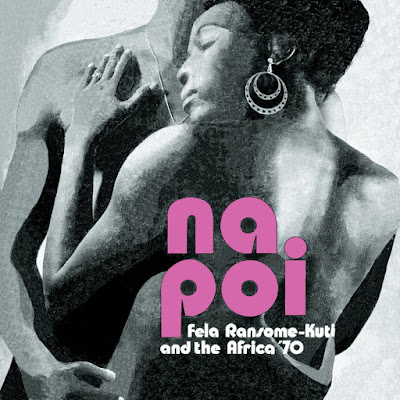 "Na Poi" literally means "things will collide," and in the lyric Kuti describes what men and women get up to in bed in graphic detail, including references to angle of penetration and lubrication. The original, 1970 version, included as the "B" side was banned by the Nigerian Broadcasting Corporation. Never one to miss the opportunity of raising the stakes, Kuti recorded a longer (25:37) version for Na Poi, released a few months later.

In truth, contemporary shock value aside, "Na Poi" isn't an arresting lyric. Few things, surely, are as boring as watching other people have sex, but listening to someone else talk about having sex is even worse. Afrika 70, fortunately, is on burning form and on the longer version, in particular, there are several edge of the seat instrumental sections.

This album is somewhat of an anomaly for Fela Kuti. Accompanied as always by the Africa '70 band, Kuti temporarily abandons his tradition of one song extending over an entire LP side -- although he hasn't strayed too far from form -- as the A-side track extends over basically one-and-a-half sides with the shorter funky rave "You No Go Die.....Unless" completing the B-side. In addition to that slight variance, the structure of Kuti's delivery, as well as the explicitly sexual intonation in the subject matter of "Na Poi" stray from tradition. The title song has somewhat of a history in that it was recorded and issued twice before. The first version from 1972 has not been reissued domestically; however, Yellow Fever (1976) updated the track, which carried the apt moniker "Na Poi '75." The following year the composition was revisited to comprise a lengthy version. In essence, the track is a sexual guide set to music. As such, it features both spoken narration as well as sung lyrics. "Na Poi"'s rhythms churn and grind through several notable movements -- including a spirited percussion section and several tight horn arrangements. These hark back to the same type of perpetual funk that became the cornerstone of Parliament and Funkadelic. Initially, the repercussions of such blatant sexuality resulted in the track being banned by the Nigerian Broadcasting Company -- although when the song was reissued in 1975 it snuck back on the air as the new version had an ever so slightly different name. "You No Go Die.....Unless" is much in the same spirit as James Brown's hard-driven funk musings. From Kuti's impassioned vocals to the upbeat syncopation of the rhythm, this track contains many obvious parallels between the mid-'70s stateside funk movement and that of concurrently popular African music. The incorporation of the Africa '70 horn section -- which is heavily featured during the bridges -- also provides a much thicker punctuation to Kuti's vocals. Lyrically, the song deals with the urban sprawl that was beginning to occur in Lagos -- in many ways a social observation on par with Marvin Gaye's "Inner City Blues" or Stevie Wonder's "Living for the City."
Posted by Zen Archer at 8:55:00 PM 1 comment: Links to this post 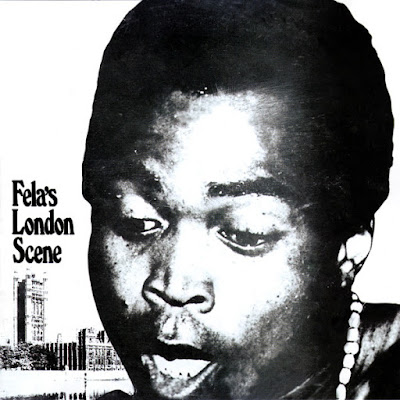 The sound of an artist coming into his own, this is Fela's first great album (I'm not counting at Afro Beat on Stage: Recorded Live at the Afro Spot because it's live and a lot messier than this one, though as a snapshot of Fela's development it's even more essential than this one). For the most part he's swung totally from his highlife roots into full-on funk, but Afrobeat is finally starting to rear its head here. The most glaring sign of things to come is on "Egbe mi o" (featuring Ginger Baker!), where Fela delves into one of the spoken word interludes that would become a trademark while The Africa '70 grooves behind him.

In 1971, Fela Anikulapo Kuti's record company (EMI) agreed to finance a recording date in London for Fela and band. Now huge stars in Nigeria, this trip was, in a way, a triumphant return to the country that had provided Fela with a musical education and the club scene where he cut his proverbial bandleader's teeth. What is important to note is that he had become good friends with former Cream (and at the time of this recording current Blind Faith) drummer Ginger Baker, who had traveled to Lagos a year earlier to meet, hang out, and play with Fela. Baker shows up on this recording (albeit uncredited) on the track "Egbe Mio," but more importantly helped get Fela gigs all over the city at such venerable venues as the 100 Club, the Cue Club, and the Four Aces. Recording at Abbey Road (a.k.a. the hallowed home of the Beatles) Fela cut these five awesome tracks in which his Afrobeat sound is more complex and jazzy than on the '69 Los Angeles Sessions. At over 13 minutes "J'ehin J'ehin" cuts a wicked groove for its entire length pushed by the horn section and Tony Allen's superlative drumming. "Buy Africa" is a anti-colonial rant worthy of the Last Poets, and "Fight to Finish" very simply kicks out the jams. A stunning record that marks the beginning of Fela's best period of recording.

Nothing here has the complexity or immediacy of his later works, but that isn't to say Fela wasn't a master experimenter already: several of these pieces change horses mid-stream, and the results are never anything less than funky. The man's playing around with song structures and with the very notion of African pop (as well as funk) as a genre, and you can tell that he (and everyone around him) is having a lot of fun doing it. "J'ehin J'ehin" features some of Fela's best organ playing, and this band was known as his most swinging lineup. Even if this isn't as developed as what would come just a couple of years later that doesn't mean you can't enjoy it on its own merits, as this is just a really, really great funk record
Posted by Zen Archer at 8:47:00 PM 1 comment: Links to this post