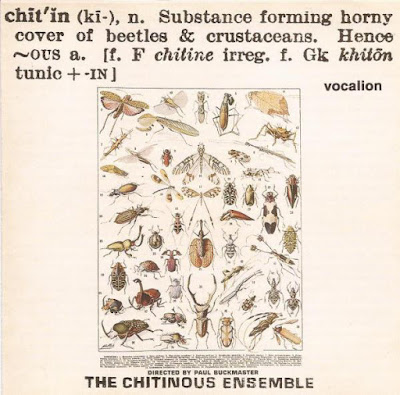 This strange and beautiful album would have never been released at the time if not for the openness of the Deram label to issue even the most eccentric material, as long as it had musical merit. The Chitinous Ensemble was as fictitious as they come, so named by cellist / composer / arranger Paul Buckmaster, who assembled the musicians to perform an ambitious piece of orchestral music he composed. Buckmaster was a gifted and accomplished musician, who was in great demand in UK as arranger and composer, working with top Rock stars like Elton John, the Bee Gees (see “Odessa”) and even the Rolling Stones (see “Sticky Fingers”). He also composed numerous film scores, including the amazing soundtrack for Roman Polanski’s “Macbeth”, where he cooperated with the Third Ear Band. The ensemble Buckmaster assembled to perform this complex extended composition includes a large string section and a large deployment of his Jazz buddies, all top British Jazz players like Ian Carr on trumpet, Chris Lawrence on bass, John Marshall on drums and many more. The music is a mixture of classical influences with Jazz-Rock rhythmic patterns and modern sound vistas, all combined together into a wonderful sonic experience. It sounds absolutely great today as if time only enhanced the intrinsic beauty included therein. Wholeheartedly recommended for more adventurous listeners.

Excellent oddity from a time when looking forward and outward sometimes meant creating a contemporary soundworld to be chuckled at by future peoples, this orchestral tone poem jazz work brings all its ideas home to roost with much enjoyment to be had indeed.

This long lost Brit-jazz release is a much sought-after collector's item as the original vinyl LP almost never turns up. Released in a small quantity in 1971 on the British Deram label (a Decca company), Chitinous has attained near legendary status amongst British jazz collectors. Many will remember Buckmaster from the pop/rock world as he arranged the strings and orchestral parts (and often played the cello, too!) on such famous recordings as David Bowie's "Space Oddity", The Rolling Stones "Sticky Fingers", The Bee Gees "Odessa" and many Elton John albums including "Tumbleweed Connection" & "Madman Across the Water". In 1972 Buckmaster was introduced to jazz great Miles Davis, which led to a friendship and to Buckmaster's involvement on Davis' landmark "On the Corner" album! In addition to the usual "jazz" instrumentation of keyboards, guitar, bass, drums, sax & trumpet, this uses a large 'classical' ensemble of 18 violins, 5 violas, 7 cellists (including the solos played by Buckmaster himself), 2 double basses, 2 trumpets, trombone, bass trombone, tuba, bass clarinet, baritone sax, and percussion! Then there is the jazz-rock ensemble which reads like a who's who of Brit-jazz: Ian Carr (Nucleus)-trumpet & flugelhorn, Brian Smith (Nucleus)-soprano sax, Peter Robinson (Quatermass, Brand X)-electric piano, Dave Richmond (Manfred Mann) & Brian Odgers (Vangelis)-bass guitar and John Marshall (Nucleus, Soft Machine)-drums - among others!!! Musically this is best described as the perfect marriage of contemporary classical music & the world of jazz-rock. Hints at Nucleus or Soft Machine here & there, some hints at Miles Davis' electric work (which was certainly a general influence on Buckmaster's work) and the classical elements are certainly influenced by a myriad of composers of the latter half of the 20th century. Certainly this was very avant-garde for 1971 and doesn't really sound that dated today. And it is, for something described as a marriage of jazz-rock & 20th century classical music, much more restrained and even beautiful than that might make you think. In conclusion it is fair to say that if you are a fan of British jazz-rock or the Brit-jazz scene then you will simply love this album. If you are a fan of fusion or adventurous rock music then you should know that this is closer to Miles Davis than it is to Brand X. Especially if you love the marriage of an orchestra with the jazz or rock world in a very integral way, that is to say not just window dressing like strings on an Elton John album, then this is right up your alley! BTW, Chitinous comes from chitin meaning the "substance forming horny cover of beetles & crustaceans.
Posted by Zen Archer at 1:19:00 AM 7 comments: Links to this post