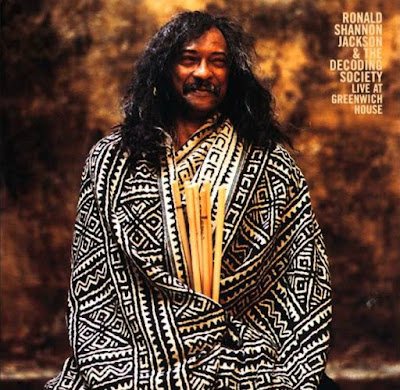 This gig took place in 1986, almost two years after Vernon Reid and Melvin Gibbs left the Decoding Society. For whatever reason, they returned for this New Year's Day gig at the Greenwich House. The standing band had moved deeply into its African rhythms phase by this time, and most of its members had been playing together for over a year. They had recently added Henry Scott on trumpet, making Eric Person's job as saxophonist a little easier. Here is the largest Decoding Society ever assembled. Two guitars, two basses (acoustic and electric), and horns, along with Jackson, make up the band of seven. The set smokes, though the producers get no points for the live mix -- it's thin and brittle in places, and who knows how hard the Knitting Factory label worked to clean up the tapes. But the music -- that's another story. The infusion of Reid and Gibbs into this band moves the intensity level -- as well as the creativity level -- up a couple of notches. Jackson had become deeply interested in the rhythms of South and West Africa and added them to his already loaded arsenal of expression. His band, however, could never hope to match his intensity, as other gigs from this period attest. But here, with two monster players who he had known and played with for an extended period, all bets were off. The energy level and the feeling of goodwill among the musicians are evident in the loose and fiery way in which they interact during the improvisational breaks. Guitarists Reid and Cary DeNigris trade lines so quickly you almost can't tell when it shifts; Gibbs and Reggie Washington shape each other's basslines by interacting with Jackson's continually switching intervals. Tempos, keys, modes, and harmonies all become interchangeable as Jackson's rhythmic inventions dictate the pace. This set is so much funkier and jazzier than others in this series. Bop lines are welcomed into the mix with rock and funk phrases -- the muted trumpet lines Scott plays on "Erri Moments" are brilliant. It's driven by confidence and showmanship, for one thing. Reid is brilliant in how understated he is, choosing to play with rather than around DeNigris or the horn players -- which is not the usual thing for him. The best examples of the band's strengths on this date are "Boiling Cabbage," "Flatbush Roti," and "The Janitor." This is one of the better issues in this series to be sure; it's solid from top to bottom.
Posted by Zen Archer at 11:59:00 PM 3 comments: 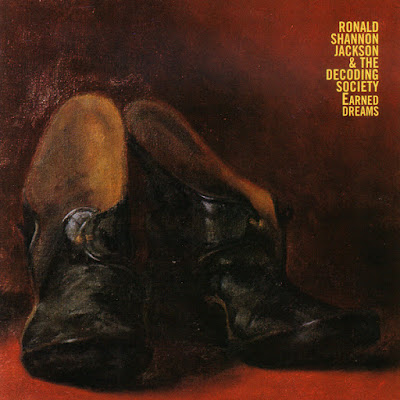 Recorded live on stage in 1984 at the Caravan Of Dreams, Fort Worth, Texas. 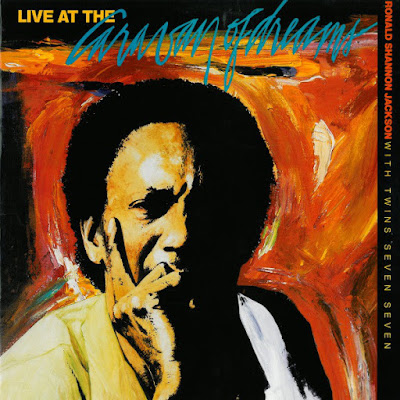 Recorded live at the Caravan Of Dreams, Fort Worth, Texas.

For the first time, harmolodia's master drummer requires no decoding; sparked by a Nigerian chantmaster, he vamps along without ever risking implosion. But a vamp isn't always the deepest of grooves, and though the synthesis should engage devotees from both sides, only "Iré," in which various sidemen shadow the chanter a note and a harmony behind, will give agnostics a joyride.
Posted by Zen Archer at 2:20:00 AM 3 comments: 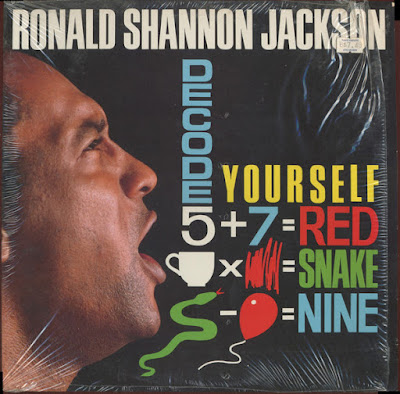 RSJ came to my attention as drummer for Last Exit. Turns out he, like Sharrock, had been around for many years and had an even more impressive resume than Sonny - playing with Ayler and "schooled" under Ornette Coleman, the father of "Harmolodic" jazz, a branch of melody/group improv that was in part the basis for much of the free jazz movement. Jackson was in Coleman's first electric group to explore his ideas. In the '80s, Jackson, living in NYC, put together The Decoding Society which incubated a group of youngsters that included Melvin Gibbs (later played with Defunkt and The Rollins Band) and, more famously, Vernon Reid, guitar god from Living Colour. It was only natural that Jackson would continue in the vein of the work he did with Coleman.

Much of the music he put out during this time was revered although this album is generally considered a low point. If Entertainment Weekly ever did an article on all his records, this would probably get a D-. What he was trying to do, however, was interesting and that was update Bebop and Free Jazz with a more techno, whatever-fusion sensibility (whereas Last Exit just thrashed the shit out of it). Hence, some of the experiments are either too much rock/techie ("Software Shuffle") or feature instrumentation that was even dated in '86 (Sonar drums went out with, like, Foreigner). Accordingly, the album starts out with a short but sweet cover of Dizzy Gillespie's "Bebop" as if announcing this is what has come before and now here's what's gonna come after (a lot of New York "loft" jazz at that time seem to be trying to make an Ultimate Statement about Jazz in the Here and Now). The cut immediately following, "Decoding" makes that point despite the hippy-dippy lyrics ("read all your dreams/key into the scene) that the Decoding Society Chorus sings are a bit lame but you can't deny the Jackson-Gibbs-Johnson (that's Rev Bruce Johnson on second bass) rolling beat, the horn/synth counter-melody and Vernon Reid's smoking guitar solo smack dab in the middle.

Bill Laswell is blamed for this record by some - for not letting Jackson's inner Harmolodics self shine with his more snaky and unrestrained melodies (which you hear in "Decoding" but seem restrained in the rest of the album). I'm usually not one to argue that the producer makes all that much difference (outside of MTV scrum-pop and disco) - I mean the ideal producer provides a second ear and should keep the engineer from interfering with the process - but given that a lot of the other Decoding Society output is pretty boss (especially live), I'm not gonna argue too much with the conclusion that Laswell had something to do with the failure of this record.
Jackson from '94 Live in Warsaw (reissued in 2000)

The liner notes that appear on the Knitting Factory website (which rereleased much of RSJ's output earlier this decade) describe the origins of the group and explains why often NYC New Jazz is also referred to as Loft Music:
“The Decoding Society came together as a group during the winter months of 1979,” Jackson explains. “I met Melvin Gibbs through Bern Nix. Melvin brought his high school ‘like-minds’ running buddy Vernon Reid into the group. Vernon brought his friend Zane Massey. All three attended Boys High school in Brooklyn. Vernon also brought in the Rev. Bruce Johnson on fretless bass. Dr. Verna Gillis, ethnomusicologist at Long Island University, gave me the key to her loft club Soundscape. She needed someone living near Soundscape to allow for deliveries at any time. This gave me the all important rehearsal space I needed for playing drums and rehearsing the band.”
A great, albeit academic, web article on Jackson and his recordings by Jeff Eldridge of UCLA that appeared in the Echo journal. Way better than anything Entertainment Weekly could do. Here's what they say about the Island albums and Decode Yourself:
The Island period (starting with Man Dance and Barbecue Dog) represented the height of the group's visibility and popularity. Funk and blues gestures had become more overt than ever, contributing to a pastiche not found in the earlier work. Tempo and feel shifted rapidly from section to section. Hints of tonality, often in funk-based solo sections, could now be heard in contrast to polytonal and atonal sections. Unison sections at very fast tempos and Reid's fiery guitar work both exhibited the flashiness reminiscent of Seventies fusion, yet the signature rhythms, quirky melodies, and arranging/orchestration style assured the listener that this sound was still unmistakably Jackson's. Despite the return of the violin, the addition of the trombone, some interesting stylistic forays into country, bebop, and space funk, and the promise of a Bill Laswell production, the third Island release, Decode Yourself, is marred by a thin sound, gimmicky electronic drum and synthesizer timbres, and (surprisingly) a plodding, four-square rhythmic monotony. 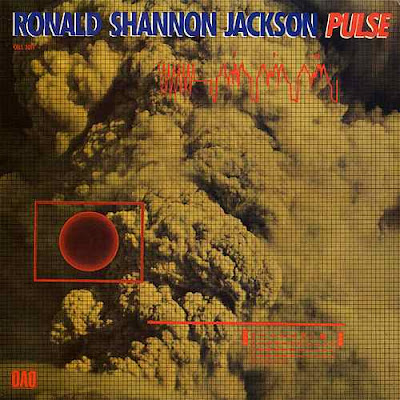 This is more or less a solo Ronald Shannon Jackson record. Poet Michael Harper appears unaccompanied on "Those Winter Sundays" and with Jackson on "Bessie's Last Dance," the latter a rare success in the poetry-and-music category that has something in common with clarinetist Don Byron's later collaborations with spoken word artist Sadiq. Meanwhile, guest Onaje Allan Gumbs takes care of "Lullaby for the Mothers," an uncharacteristically sentimental solo piano piece that borders on new age territory. The rest of the album is all Jackson, though. The most interesting tracks are the ones where he sings (in the same rough, weathered, bluesy style as his occasional vocals in Last Exit) or speaks along with his drumming. He does the latter on "Raven," the album's 11-minute centerpiece, groaning out a surreal mix of wordless noises and quotes from Shakespeare and Edgar Allen Poe in tandem with his explosive drum rolls and fills; Jackson really seems to be out in his own world here. Elsewhere, there are several more straight-ahead solo drum tracks that, while being as well played as one would expect, aren't as engaging as "Raven," the New Orleans-flavored "Puttin' on the Dog" (sic), or "Slim in Atlanta." Due to its inconsistent nature, Puttin' on Dog is probably better left to established Jackson fans, but its unusual highpoints do make it worth hearing.
Posted by Zen Archer at 1:27:00 AM 2 comments: 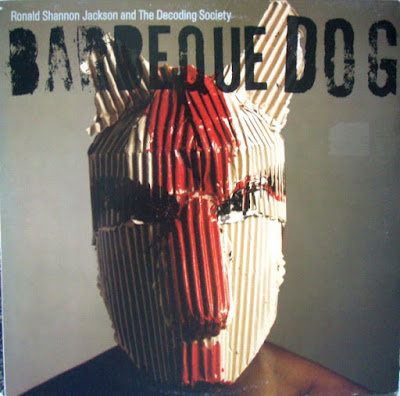 A follow-up to the highly successful (artistically) Mandance, Barbecue Dog doesn't quite reach the explosive heights of its predecessor, but is arguably the next best item in Jackson's discography. The band strikes a comfortable balance between the horns and the electric instruments, allowing each to surface when needed, and also compliments the required barnburners with more contemplative pieces. Thus, for every "Trial of an Honest John" where the sky threatens to cave in, there's a lovely, serene number like "Mystery at Dawn," with the leader switching to flutes and often incendiary guitarist Vernon Reid (pre-Living Colour) plucking a delicate banjo solo. As worthwhile as the better numbers here are, however, the bulk of the compositions begin to settle into something of a rut, if not necessarily a bad one. The listener begins to hear a certain standardization of material that would become more apparent in subsequent releases. Still, there's much to enjoy here, including Henry Scott's dazzling trumpet work, the unreservedly funky dual bass playing of the Reverend Bruce Johnson and Melvin Gibbs, and, of course, the leader's own roiling, brink-of-chaos drumming. Barbecue Dog is possibly the last Decoding Society recording that can be recommended with few reservations.
Posted by Zen Archer at 1:08:00 AM 2 comments: