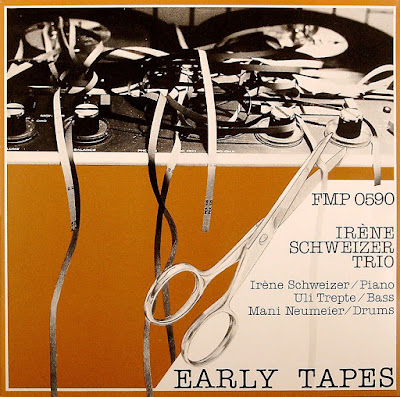 "Early Tapes" form the Rosetta Stone of pianist Irene Schweizer's music. This early trio - featuring Guru Guru's monster drummer Mani Neumeier - offers clear glimpses of her formative influences as well as her own individualistic approach to the keyboard. Echoes of Dollar Brand, Cecil Taylor, and Paul Bley can be heard, but in a context that's all Schweizer.

"Schweizer’s Early Tapes clearly reveals her roots in such players as Cecil Taylor, Paul Bley and Dollar Brand. She has forged a muscular, diverse, creative and technically excellent style that is truly her own." - Milo Fine, Sweet Potato 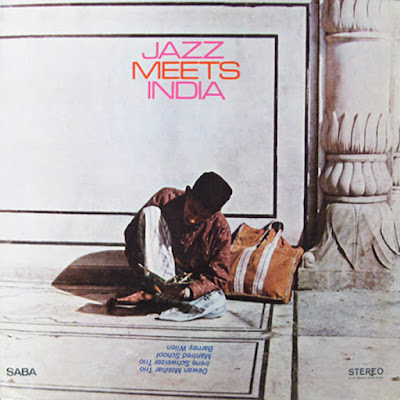 Years before John McLaughlin began a deep investigation into the music of India that resonates to this day, there was Jazz Meets India. It wasn't the first time that Indian music had crept into popular western culture—The Beatles and John Coltrane, amongst others, had already seen to that—but this 1967 MPS date was an early experimental meshing of linear Eastern modality with free jazz improv. There have been plenty of failed cross-cultural experiments, but thanks to Promising Music's ongoing MPS reissue series, this conjoined septet of European improvising trio, traditional Indian classicists and a couple of additional horn players proves an unqualified success.

Comprising only three compositions—two extended pieces and one relatively brief one at just over five minutes—the premise of Jazz Meets India arose when MPS producer Joachim Ernst Berendt asked pianist Irene Schweizer's drummer, Mani Neumeier, if he had any connection with Indian musicians. The drummer had studied with sitarist/tablaist Dewan Motihar a couple years earlier in London, and Motihjar was, himself, a student of Ravi Shankar—already on the ascendancy to international stardom at this time. With Neumeier's insistence of including saxophonist Barney Wilen, and the additional of trumpeter Manfred Schoof, this mix of eastern and western instruments works precisely because, at the core of all three pieces, is a fundamental that's not jazzed up, nor toned down. Instead, both sides moving towards a common middle ground where individual authenticity remains, while creating something fresh and exciting.

The 17-minute "Sun Love," co-written by Motihar and Neumeier, begins steeped in Indian traditionalism, with Kusum Thakur's droning tambura and Motihar's sitar patiently finding their way to a tablaist Keshav Sathe's more defined pulse. Schweizer's trio doesn't enter until after the four-minute mark, but when they do, they're clearly coming from a space heralded by Coltrane—albeit more gently—as Neumeier injects a 6/8 swing over Sathe's longer rhythmic pattern. Bringing a chordal instrument into the mix of this largely linear music could displace it, but instead Schweizer's increasingly active playing respects the piece's inherent modality, drawing on McCoy Tyner for inspiration but going to areas of even freer expressionism. Schoof—whose recently reissued Resonance (ECM, 2009) was nothing short of revelational—plays with equal license, as does Wilen, who adopts a less nasal tone than that of Coltrane's.

"Yaad" provides a brief moment of contemplation, Wilen's saxophone a delicate foil for Motihan's gentle singing, but it's Schoof's closing "Brigach and Ganges" that's Jazz Meets India's greatest success. Starting with Uli Trepte's microtonal-centric bowed bass and some empathic yet lyrical interaction between Schoof and Wilen, over the course of 14 minutes it builds towards the disc's greatest reckless abandon; Neumeier and Scweizer, in particular, playing with unbridled fire matched, perhaps surprisingly, by Motihan.

Neither east nor west, yet redolent of both, Jazz Meets India is an overlooked gem from the MPS catalogue, one that may have seemed more innovative at the time of its release, but which remains engaging nearly 45 years after it was first recorded.

(Less than one year after this record Neumeier and Trepte radical changed their musical verve by founding the heavy psychedelic rock band Guru Guru, who's second album title was "Hinten". You can find a piece called "Hinten" on Irene Schweizer Trio - Early Tapes.) 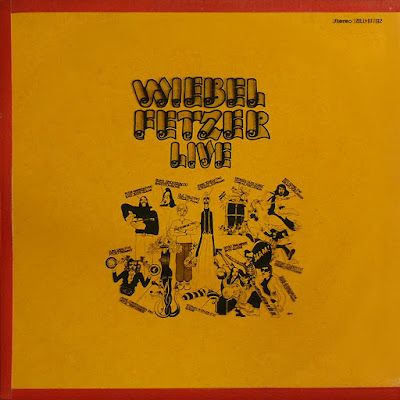 It all started at the "Weisser Wind" of Zürich, in April 1971. Seven Swiss, three Danes, an American and a Swede, played the whole evening of the 27th, experimenting new sounds and melodies, for all the free jazz lovers... The result is just astonishing, brilliant and out of time !!! That session will always remain timeless, as these sounds (more than music) transports you elsewhere, allowing a long interior mediation. Of course, you can call it free and experimental jazz / rock but I don't think it can properly be classified. This so dense album is properly a chronological history of music: hear it a hundred times, you'll always discover new things in it ! After a few plays, it's to me a subtle and refined melange of Stravinski, Miles Davis (especially Bitches Brew) and Amon Düül. It also makes me think about "Shining" creepy OST.

Four tracks, the shortest being 17 and a half minutes long and the other three all going past twenty. I was expecting this to be much, much freer than it was. It's still pretty off-putting, particularly in its dedicated lack of direction, but I was surprised by how much ground is covered on this album. The last track gets all psych-rocky out of absolutely nowhere, some of it's experimental big band-y, some of it's straight free improv... veritable assloads of wandering, but it doesn't like to stick to one theme for very long. Well, I say very long... 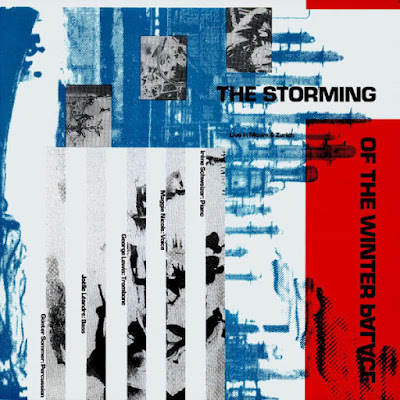 Now and Never recorded May 18th, 1986 at the International-New-Jazz-Festival-Moers by Westdeutscher Rundfunk (WDR), Köln.
The Storming of the Winter Palace and Living on the Edge recorded March 25th, 1988 at Taktlos-Festival, Rote Fabrik Zürich.

The Storming Of The Winter Palace was originally released on LP in 1988 as Swiss based “ Intakt Records ” has thankfully chosen to reissue this most interesting recording on CD. The 26-minute opener, “ Now and Never ” offers a hearty mix of disparate motifs, glistening choruses and endearing interplay among trombonist George Lewis, vocalist Maggie Nicols, pianist Irene Schweizer, percussionist Gunter Sommer and bassist Joelle Leandre. Here, Ms Nicols displays a supremely masterful vocal range complete with spurts of humor, scat and spoken word intermingled with weaving, multidimensional ensemble work along with an abundance of peaks and valleys. The musicians entice one another with interesting dialogue and shrewd on-the-fly development yet many of these sequences sound composed or pre- planned. On “ The Storming of the Winter Palace ” George Lewis and Ms Leandre are the instigators who often prod Ms Nicols into operatic-style vocal pyrotechnics, which unto itself is rather amazing. The audience in attendance must have literally been on the edge of their seats during the final piece, titled “ Living on the Edge ” as the band pursue vivid theatrics, circular thematic movement along with some downright awe-inspiring drumming/percussion from Gunter Sommer.

The Storming Of The Winter Palace is a showstopper as this writer often thought of the visual aspects; hence, a video of this performance would have been an added treat as the music and overall intensity alludes to one heck of a live performance!

Fabulous musicians doing fabulous and innovative stuff. The playing is wonderfully reactive, allowing for creative space for each member. Even the vocal improv is not as cheesy and grating as it could be. As these things CAN be. As they're prone to be...
Intakt Records is doing great shit, man. They're Swiss; it must be the water or the neutrality.
Fun fun fun fun. Will give this another listen soon, but this is some really great stuff. 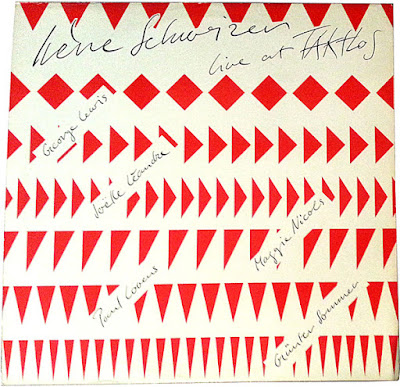 At the first Taktlos Festival in 1984, Irène Schweizer assembled several chosen musician to a three-day improvisation meeting. The recordings, which appeared in 1986 as the first Intakt LPs, reveal the improvisational art of the pianist in three different formations: Schweizer and Lewis / Schweizer, Nicols and Sommer / Schweizer, Léandre and Lovens. Twenty years after their initial release, these improvisations haven’t lost any of their playful inventiveness, liveliness, power and originality. “A city tour through musical liberated zones” was what Zurich press wrote after the festival. In addition, the record is a cultural-political document of the atmosphere of awakening in Zurich in the eighties; moreover, it marks the beginning of the jazz label, Intakt Records, as well as that of the Taktlos Festival.

Schweizer’s Live at Taktlos—taped in 1984 at the first annual incarnation of the Swiss festival bearing the same name—marked the first LP release on Intakt. Reissued on CD the album presents the pianist in three extremely fertile situations with fellow improvisers from Europe and America. Peter Pfister, most-renowned these days for his impeccable engineering work for Hatology, handled the recording and while the fidelity isn’t blemish free it still captures the players with true-to-life sound. The disc's three main pieces accord ample space for extended free improvisation, the longest among them swallowing up a good twenty minutes. “ Every Now and Then, ” a manically-paced match-up of vocalist Maggie Nicols with pianist Lindsay Cooper works as coda. “ First Meeting ” teams Schweizer with trombonist George Lewis for a lengthy extemporization that is startling in its degree of close convergence, so much so that parts, particularly the puckishly tuneful conclusion, sound pre- composed. A wealth of unorthodox patterns and phrases pour forth from both players, often at telegraphic speed, but the whole constructed from these parts never loses a guiding sense of symmetry.
Less easily accessible is the trio of Nicols, Schweizer and Günter Sommer who convene on the enigmatically-titled “ Lungs and Legs Willing? ” Nicols ’ operatic, largely abstract vocals soar and swoop, leaving pianist and drummer to shape a sequence of ground-swelling collisions, soft and stentorian, that serve as terrestrial counterpoint in a crowded exchange. “ Trutznachtigall ” delivers an even most challenging experience via what on the surface seems the most conventional instrumentation. Bassist Joëlle Lèandre brings her full repertoire of capricious techniques to the event, sawing down tree trunks with her bow, punishing her strings with chest-pounding pizzicato flurries and, if the snapshot in the CD booklet is to be believed, even playing her instrument upside down. Her gruff and often outrageous vocals add to the turbulent atmosphere, veering from banshee wails to romantic cooing and back again. Lovens’ percussive idiosyncrasies fit right in, the fractious, but precisely intentional clatter from his kit complimenting Schweizer’s frequent forays under her piano’s hood to pluck and damper hammered strings. Attaching a play-by-play to all the delirious, irreverent action and reaction ends up a pointless pursuit within mere minutes. A marker for various partnerships that have since made good on their promises tenfold, this music still packs an enjoyable jolt on par with its initial release twenty years ago.

By DEREK TAYLOR, All About Jazz, USA, November 2005

Most independent recording labels have their bellwether artists, those musicians on the roster central to the label's identity and mission. Hatology has Joe McPhee. Peter Brötzmann is commonly associated with FMP. Tzadik revolves around John Zorn. In the case of Intakt it's Swiss pianist Irène Schweizer. Schweizer has been playing actively for nearly half a century and the last several decades of her career have been faithfully documented on Intakt. Ideally, labels and artists share a reciprocal relationship. It's the charge of the label to act as advocate for the artist and the job of the artist to supply the label with meaningful creative capital. Schweizer's partnership with Intakt represents a model of this sort of mutually sustaining arrangement.
INTAKT RECORDS:  http://www.intaktrec.ch/