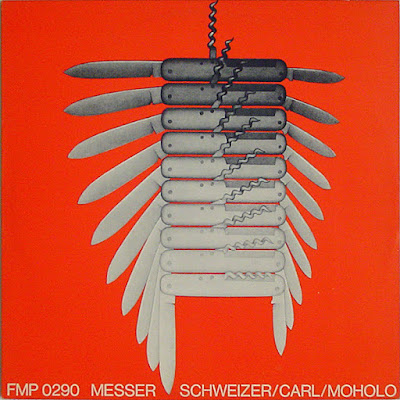 
"Lively free jazz with extensive use of extended techniques - especially from Schweizer who had started playing inside the piano. And I have rarely heard Rüdiger Carl in such a blower’s role."
--François Couture 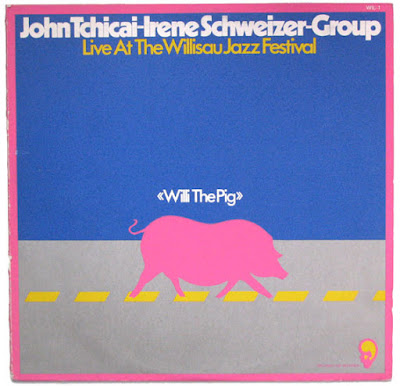 August 1975 heralded the first Willisau Jazz Festival in Switzerland. The performance by the quartet featuring Danish saxophonist John Tchicai and Swiss pianist Irene Schweizer made its way into a pair of microphones, and shortly thereafter onto a limited edition LP—which of course went right out of print. Free jazz afficionados interested in the active European improv scene of the '70s will be grateful to know that they can now get their hands on this document without hunting endlessly through used bins.
Hot-pink Willi The Pig strides confidently down the middle of the road on the cover drawing, but the music on this disc does anything but the same. The 47 minutes of free improvisation on Willi The Pig range from quiet contemplative moments to explosive outbursts of energy. The particularly satisfying feature of this performance is the way Tchicai and Schweizer coordinate their playing to bring the improvisation to a higher level. Tchicai's saxophone playing, frequently reminiscent of Ayler, emphasizes thematic content with powerful but bridled emotional intensity. Schweizer tends to play impulsively but busily on the piano, throwing out scampering runs and insistent clusters that help shape Tchicai's energy and flow. While bassist Buschi Niebergall and drummer Makaya Ntshoko propel the music forward with pulsing rhythms, it is Schweizer and Tchicai who really dominate the performance.

Unfortunately this reissue derives from three virgin LPs, since the original master tapes were lost. As a result, the frequency range is compressed, the piano retreats to the background, and the drum set tends to reduce itself to a lot of cymbals. In addition, the full-length performance is cut in half by an LP break during a period of particularly high intensity. So it's not the most ideal sonic setting—but if you keep your ears open, you can follow the evolution of an unusually fresh-sounding spontaneous improvisation.
Posted by Zen Archer at 11:05:00 PM 1 comment: Links to this post 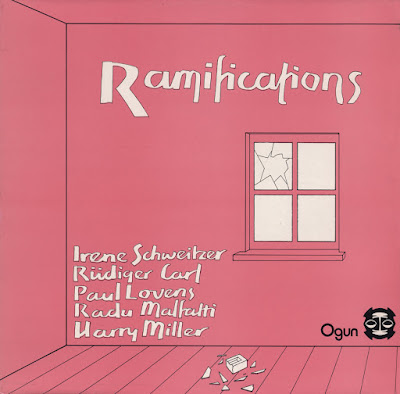 Recorded in September 1973 at the Kunsthaus, Zürich.

One of the leading exponents of free piano playing in Europe from the late 1960s onward, Swiss-born Irène Schweizer occupied a somewhat lonely place in the high-energy FMP canon as she worked with Peter Kowald, Evan Parker, Manfred Schoof, the Wuppertal reedman Rüdiger Carl and others in European free improvisation's heyday. Renowned as a soloist and for her duets with many of today's most innovative percussionists, she also co-led the Feminist Improvising Group in the 1980s and the trio Les Diaboliques (with bassist Joelle Lèandre and vocalist Maggie Nichols) from the 1990s onward. Her highly percussive and volcanic improvisations, coupled with a penchant for playing inside the piano, preparing the instrument and using other aleatory techniques, has made her a wide-palette partner for free musicians from trombonist Radu Malfatti to tenor man Fred Anderson.

Schweizer was born July 2, 1941 in the Rhine valley near the German border. "I grew up in a restaurant. My parents owned a restaurant in Shaffhausen, Switzerland. My older sister played classical piano; she took lessons, and I started to play accordion at the age of eight or nine. Later on my father gave me a Christmas present of a piano-accordion. So I started to play this piano-accordion but it didn't fit; it was too big for me and I didn't like to play the piano in this funny way! She switched to piano soon after as the family apartment took on a vibrant life after the war: "We had a lot of dance evenings where big bands came to play. We had theatre performances there; it was quite a big room upstairs—we had weddings, funerals, banquets. We had a lot happening there—my father was a cook.

In the 1950s, falling in love with the cool-jazz and Dixieland bands that rehearsed in their apartment, the primarily self-taught Schweizer began sitting in locally and soon had her own groups. "We had a quintet when I was eighteen years old. We were called The Crazy Stokers [laughs], and we were a mainstream group—not really Dixieland, but on the edge of modern jazz. With this quintet we played a lot in Switzerland, in Shaffhausen and in other places. Later on I had a group called the Modern Jazz Preachers; we were copying Horace Silver and Art Blakey's Jazz Messengers—those were our idols. Schweizer's influences then were those players with a strong left hand—Erroll Garner, Mary Lou Williams, Horace Silver, Bobby Timmons and Junior Mance.

Her trio of the 1960s, though documented only on an LP issued in the 1980s on FMP (The Early Tapes), and as the rhythm section for Manfred Schoof and Barney Wilen on the Jazz Meets India LP (Saba, 1967), was Schweizer's entrée into free jazz. Though Ornette Coleman, Cecil Taylor and John Coltrane were in the air, the Paul Bley Trio was also a heavy influence: "I took home a record of Paul Bley and thought, 'Oh my god, this is such great music!' We started to slowly come off the functional harmonics of the time period and, when we rehearsed, during one rehearsal we just realized we had no time anymore and no theme, and we just played—that was the beginning of free improvising for us. With bassist Uli Trepte and drummer Mani Neumeier (both later of the Krautrock band Guru Guru, with guitarist Axl Genrich), the trio toured extensively in Europe until dissolving around 1968.

Shortly after that group's termination, she met drummer Pierre Favre at the Montreux Jazz Festival and they began rehearsing in the Paiste factory, where he worked as a drum technician (Schweizer became his secretary). "We had a room with a big grand piano and a lot of drums and cymbals all over, and every day we played together. So the Pierre Favre Trio was born. With bassists George Mraz and Peter Kowald, and later adding saxophonists Evan Parker, Trevor Watts and Gerd Dudek, and trumpeter/guitarist Jürgen Grau, the group was very active on the European scene into the early 1970s. With Kowald, they cut the blueprint for an explosively deconstructed piano-bass-drums trio, Santana, for their own PIP label in 1968. That same year, Wergo released the quartet version (with Evan Parker) on LP, a steamrolling blast of Western European energy that was in direct homage to the Coltrane Quartet, but with its own geographic fires being lit.

Schweizer's affinity with drummers is well-documented; she plays percussion in private and has rehearsed with local musicians in Zurich in the drum chair, but a series of recordings beginning in 1986 for the Intakt label more clearly mark this attraction. "Of course I'm very critical with drummers! [laughs] I really am lucky that I've been able to play with some of the best in Europe, it's really great. I mean I love to play with Han Bennink as a duo, and there we don't need a bassist. It's so obvious! All the CDs I've made are all live concerts, not studio recordings, and we never thought beforehand that we wanted to make an album. They were all live concerts we recorded and Patrik [Landolt], the producer for Intakt Records, had the idea to bring out duo recordings of all the drummers I've worked with over the past thirty years. This was before FMP brought out all those drum duos with Cecil [in 1988]. In addition to Bennink and Favre, she has recorded duets with Andrew Cyrille, Louis Moholo and Gunter "Baby Sommer, as well as a reunion with Mani Neumeier and recently worked with Hamid Drake.

Another fruitful musical relationship began in 1972 with Wuppertal saxophonist Rüdiger Carl, with whom she recorded in various formats for Ogun, FMP, and Hat Hut until the early 1980s. These included the powerful bass-less trios on FMP with Louis Moholo, released on Messer and one-half of the particularly infamous Tuned Boots. "When I play with a horn player and a drummer, of course we can still do it with a bass, but [laughs], you know, it's percussive music! These aggregations culminated in the COWWS quintet, with bassist Jay Oliver, violinist Phillip Wachsmann, and guitarist/noisemaker Stephan Wittwer.

But playing in the hardcore free-jazz scene of 1970s Europe was difficult for a woman, even one whose music fit in very well with the "boys' club of European free music: "I was suffering sometimes; they all respected what I did as a musician, and I could feel that. But I had to cope with them and sometimes I didn't feel like going to the bar and drinking my head off. I wanted to do other things, but then I was alone. Musically I never had any problems, and sometimes other female musicians when they played with men, singers you know, they had problems because musicians wanted to have more than music! But they knew they couldn't do that with me because I'm not heterosexual, I'm a lesbian. Most of them knew it so they didn't try.

Schweizer found like minds in progressive English improvisers, vocalist Maggie Nichols and clarinetist Lindsay Cooper. "Lindsay Cooper came to Zurich with the Henry Cow group, and she came over to me and asked if I wanted to join an all-women's group. I said "Oh, but you want to do that in England. I'm living in Zurich; how will we do it? She said "We want to do it internationally; you come to London and then we'll start from there. So with Maggie and Lindsay and Anne Marie Roelofs from Holland, the trombonist, we started this Feminist Improvising Group. Maggie and Lindsay and me, we were all involved in the women's liberation movement you know. For me it was an experience, because I'd only been playing with men all the time, and there was no woman I could play with until the late 1970s.

The group disbanded, only to be reformed as Les Diaboliques with Nichols and bassist Joelle Lèandre—a very theatrical and wholly improvised trio. "When the group was dying because everybody had other projects, Joelle came to hear us in Paris. Immediately we had good vibrations and she said 'come on and play.' The first trio was with Annick Nozati, the singer [and filmmaker] who died, and later on we formed this trio with Maggie, Joelle and me. We've toured France, Germany, England and Switzerland quite a lot from the '80s and '90s to today.

"So this group has existed over twenty years now, and for me it's still a challenge! It's completely free, always. You'd have to see it—next year there is a DVD coming out of a live concert. We said we don't want to make another CD—we have three now—so the next album has to be a DVD. People have to see us when we play—it's quite a big item, and it's important that people see us because Maggie is very theatrical and Joelle is as well... I learned it from the Dutch musicians, the ICP people and Misha Mengelberg. We were not as stubborn as the Germans [laughs]!

Schweizer's own perseverance has served her well, though, in the face of masculine improvising community that, while improving in the past few decades, still has a long way to go. She has been a leading light for improvisers like pianists Marilyn Crispell and Sylvie Courvoisier, Leandre, Swiss saxophonist Co Strieff, and many other improvising women on the international scene.

Her recorded output, while strong in the 1970s, was poorly distributed via labels like FMP, which had minimal distribution outside Germany, and even smaller labels like Ogun, Willisau Live (for which she recorded Willi the Pig with saxophonist John Tchicai, bassist Buschi Niebergall and drummer Makaya Ntshoko), Bazilius and PIP. Intakt, for whom she has recorded over twenty releases in as many years, has significantly better European distribution and has brought her music and that of her peers to a wider audience.