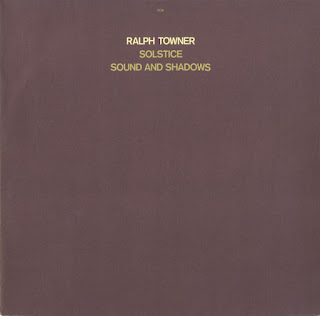 If Ralph Towner’s classic Solstice was an overland journey, then Sound And Shadows is a subterranean dream. Featuring the same lineup as its predecessor—Jan Garbarek on saxophones, Eberhard Weber on bass and cello, Jon Christensen on drums, and Towner himself behind an arsenal of instruments—the results are perhaps not as focused. Then again, they don’t need to be.
Amid the spacious 12-string considerations of “Distant Hills,” we cannot help but feel a rich and complex topography curling into slumber above our heads. Weber’s electronic touches here deepen what is already clothed in darkness. The tighter “Balance Beam” is, like its titular object, steady and reassuring yet something to which one must pay respect if one is to navigate it successfully. Garbarek’s sopranic accents teeter across it, bringing with them the idea of light where there can be none. “Along The Way” is a collection of invisible snapshots animated by the life force of the musical gesture. Towner reprises his deft pianism in “Arion.” Caressed by the fluid unity of Christensen and Weber, he unhinges unspoken memories into the soil. “Song Of The Shadows” ends the album in a blend of classical guitar and flute over receding strings.

Along with Garbarek’s open splendor and admirable restraint, Weber’s snake-like pedal points comprise the ideal complement to Towner’s pinpoint metallic precision. Christensen’s cymbal work glistens as ever, proving that rhythm can be just as effective in a whisper. This is an album of sensations without images, one that reminds us that in order to have light, we must have umbrage, and this it brings in great quantity.
Posted by Zen Archer at 1:25:00 AM 2 comments: Links to this post 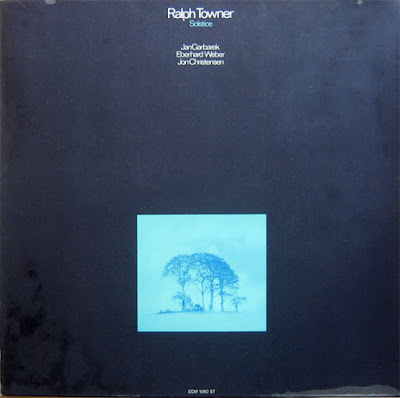 This is arguably the first recording to fully flesh out the aural expanse for which ECM has come to be known. Although I am well aware of the immense groundswell of musical activity that was the 1970s, certainly an album like this was a refreshing and altogether mind-altering experience for those fortunate enough to be young musical explorers at the time. Featuring a lineup of musicians who would go on to weave ECM’s significance into the fabric of time, Solstice is a tour de force of musicianship, writing, arrangement, and recording.

Each track is brimming with life and features the sensitive application of a variety of instrumental combinations and studio savvy. “Oceanus” showcases Garbarek in his prime, soaring with an unbridled emotional register. As always, Towner’s 12-string speaks in 360 degrees. Superb drumming from Christensen complements lush melodic lines from Weber, who stretches a melodic cello into infinity while his bass arises like the conical aftereffect of a water droplet. “Visitation” clouds this ardor in a nocturnal vision filled with laughing spirits. “Drifting Petals” is a slow progression, a timid look out onto a dusty plain where the promise of freedom looms larger than the possibility of danger. But then an elder’s advice rings in our ears and pushes us onward. Feet move of their volition and pull us into the ever-receding horizon as the first drops of a squall streak across our foreheads. Towner proves again that his piano musings are not to be taken lightly, as they make for one of the most evocative tracks on the album. A transcendental 12-string solo (with gentle dimensional support from Weber) opens “Nimbus,” soon blossoming into a flourish of flutes, drums, and a bowed bass that cries with the grating fluidity of a sarangi. Garbarek’s sax joins in the fray and lets loose its harmonious fire. The deftly overdubbed flutes return, spreading their wings for a few moments before fluttering off into the distance. “Winter Solstice,” “Piscean Dance,” and “Red and Black” comprise a triptych of duets: the first for classical guitar and sax, the second a prime jam for 12-string and drums, and the third for 12-string and bass. “Sand” ends our cosmic journey with one of Garbarek’s deepest meditations for sax set to the strangely compelling ululations of Christensen’s flexatone lolling about in the background.

Melodically robust while structurally yielding, this is an album to be treasured and is a must-listen for anyone desiring to know what ECM is all about. An astounding meeting of musical minds if there ever was one.
Posted by Zen Archer at 1:17:00 AM 1 comment: Links to this post