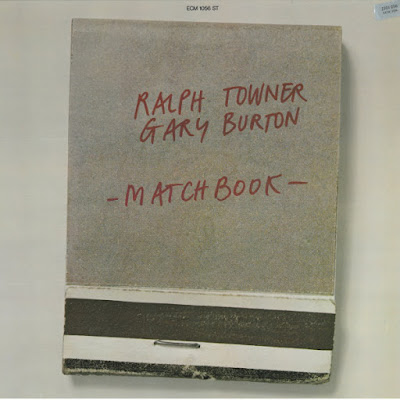 A matchbook doesn’t typically provide a surface for lasting statements. On its flap, one scrawls a phone number, an address, or any other piece of information as ephemeral as the flames for which it is mass-produced. Such is not the case with guitarist Ralph Towner and vibraphonist Gary Burton. Instead, we get indelible marks of grace and humility, each a brighter spark at the wick of our attention.

Towner originals form the bulk of this project, of which the opening “Drifting Petals” is a quintessentially evocative example. Between his 12-string and Burton’s plaintive returns, we get an emotive handful of light poured directly into our ears. This combination recurs in an intimately redacted version of “Icarus,” which paves new avenues of understanding through one of Towner’s most popular compositions. Burton’s touch adds a metallic fervor that contrasts well with the softer piano version on the previous year’s seminal Diary. Twelve strings of bliss continue in “Goodbye Pork Pie Hat.” In this delicate, dark arrangement, Mingus’s classic tune wilts into a devastating ending.

The album’s remainder gives us Towner in a more classical mode, thereby halving the number of strings at his disposal, but with no loss of distance. “Some Other Time” builds an enchanting synchronicity, throughout which both instruments connect and drift apart like memories and expectations. Burton’s plush chords give Towner’s fingers plenty of forgiving terrain. The two switch roles, as they often do, for their respective solos. “Song For A Friend” is a bleaker piece wrapped around a gentle persuasion. As an affirmation of beauty, it is sometimes painful, shaded by the same colors with which all relationships are rendered. Towner draws the album’s most endearing solo here across an ideal tidal accompaniment. A notable highlight is Towner’s buzzed introduction of the title track, achieved by weaving a matchbook into the strings of his guitar. This sets off a flurry of whimsical activity and attentive soloing, meshing in a tightly knit cloth that leaves no dangling thread.

Three instrumental angles converge in the triangular “Aurora”: classical and 12-string guitars occupy the left and right channels, while vibes bond them with living energy and song. In addition, Towner and Burton are each given their own moments in two brief, but beautiful, tracks. “Brotherhood” is a haunting piece by Burton alone, its musical nether regions fluttering in anticipation of the higher notes dropping into its dark pool, while “1×6” is a classical guitar solo that ends before it begins.

The sound of this album is like no other and unfolds itself with the delicacy of a morning glory, yet with melodies as indestructible as the sunlight that sustains them. Its many colors are provided not only through finely wrought melodies, but also through a wealth of rhythmic variations throughout. If you like either of these artists apart, then you can’t go wrong with them together. 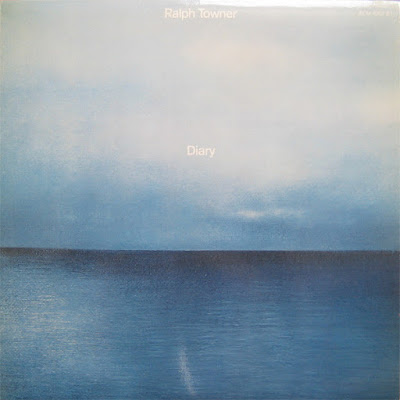 This is about as intimate as music gets. Diary features Towner on guitars and piano via overdubs, creating a layered sound that is at once dialectical and univocal. The recording gives Towner vast space in which to work, pushing his reach ever skyward. His guitar lines drip like liquid mercury, beading apart and reforming in continually novel ways. As with much of Towner’s work, Diary gives us a series of pictures, or perhaps even an array of lenses through which to view the same scene from different perspectives or times. “Icarus” is a resplendent duo for 12-string guitar and piano that erupts into a stunning passage of plucked harmonics accompanied by bursts of piano improvisation. Though one of Towner’s most beloved compositions, nowhere else does it sparkle with such effervescence. “Mon Enfant,” a traditional tune and the only non-original in this set, is lovingly arranged for the temperate give of nylon. “Ogden Road” is another 12-string/piano number, the scope and feel of which seem to presage the epic tendencies of Steve Tibbetts. “Erg” is an invigorating piece for two guitars, one of which Towner scrapes, jangles, and taps to furnish a uniquely rhythmic backdrop. As coda we have the lovely “The Silence Of A Candle” for piano alone. Overall, Diary stays true to its subtle convictions. And while more abstract tangents like “Images Unseen” may feel somewhat less realized than other pieces, they never fail to welcome the listener into their frustrations and fears. That being said, an intriguing indifference coheres the album, as if born of the thrill of charting new territory: the explorer’s heart is struck with such awe that all people and circumstances leading up to that moment seem to fade into the most unreachable recesses of memory. Yet once the discovery has been made, all of it comes rushing back. This is precisely what a diary does, turning the past into the present through the act of inscription (recording) so that one can uphold that past later as a tangible object of scrutiny or validation, a log of one’s journey to “getting there.”

As the cover art would imply, this music is two-thirds stratospheric, one-third oceanic, and accordingly played with grace and undulation. Every instrument and sound is the result of careful thought and choice, and the deeply considered arrangements are delectable. The 12-string is a mainstay of Towner’s repertoire, and what he does with the instrument is nothing short of inspiring. Having first discovered Towner through his solo guitar music, I was pleasantly surprised by how suitably well his duly inspired piano riffs complement this album. Towner has everything he needs at his fingertips: a full-fledged percussion section, lead voice, and accompaniment. The one thing missing in his ensemble is you, the listener. So what are you waiting for?
Posted by Zen Archer at 6:17:00 PM 1 comment: Links to this post