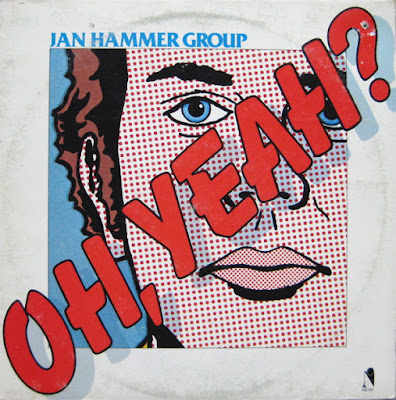 
Mahavishnu Orchestra's first (and arguably most prolific) incarnation came to a painful end in 1973, as a sudden rise in popularity and a series of calamitous recording failures suddenly turned the great Mahavishnu into less of what they originally were into more or less the John McLaughlin Group. The band's original lineup, however, was so bursting-at-the-seams with talent and skill that it's members couldn't help but go on to form formidable solo careers -- Billy Cobham would traverse the jazz fusion path himself with Spectrum in 1973, and Jan Hammer, after collaborating with fellow musician Jerry Goodman, debuted his own solo material with The First Seven Days in 1975.
The album was well-received, and showcased the excellent skill Hammer obviously had. He continued on with the jazz- fusion shtick until the 80's, where he found himself composing film and television scores for such programs as Miami Vice. For the time being however Hammer really got in the swing of things and, not but a year later, delivered the facetiously titled Oh, Yeah? in 1976.

It's common for musicians to take an album or two to really get going, and get going Hammer did. Oh, Yeah? is a romp through some of the most thought-provoking and challenging sides of the jazz rock genre, whether it be the thumping bass/timbale combination of 'Bambu Forest', the eclectic and insane callbacks to Mahavishnu on 'Twenty One', or the driving openers and closers, 'Magical Dog' and 'Red and Orange', respectively. Almost every single song has something different to say in their own right, such as the throwing in of drummer Tony Smith's soulful vocals on 'One To One'. Jan Hammer and his band utilize an almost proto-80s synth culture to design Oh, Yeah? to be a sort of generational bridge that sits on neither side of the waters. A culture clash it may be, but it's a good one. Jan Hammer himself is the main pioneer in this regard, and with his effective use of a gamut of different synthesizing and keyboard effects it's easy to see why his more progressive electronic leanings make a greater impact than the likes of new age artists like Jean Michel Jarre did.

Towering and powerful, Oh, Yeah? is a can't-miss album, not only of the jazz fusion genre but of 70's music in general. It is the definition of a passion-project and is justly the penultimate release of Hammer's career.
Posted by Zen Archer at 5:48:00 PM 2 comments: Links to this post 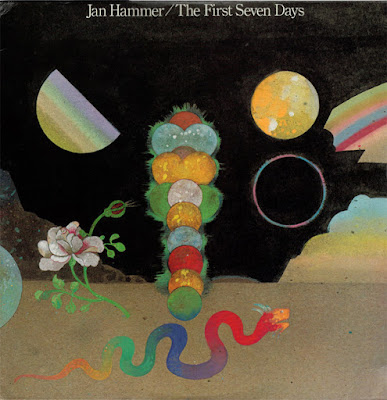 Here's one of those rare albums that not only sounds just as good as it did in 1975, but has actually improved with age. The first solo project by the keyboard ace of the original MAHAVISHNU ORCHESTRA was (by Prog standards) only a modest instrumental concept album at the time, which might be one reason why it plays so well over 30 years later.
Maybe there were just too many keyboard virtuosos strutting their stuff in the mid 1970s, and an undemonstrative artist like Hammer was simply lost behind the glare of all those sequined capes. And maybe a little time and distance were needed to best appreciate the seamless blend here of so many different influences: prog rock, jazz-rock fusion, world music, middle-European folk songs (Hammer was a native Czech), the Western classical- orchestral tradition, and of course all the emerging trends of late 20th century electronica.

Or maybe, in retrospect, it's simply the glorious sound of all those vintage analog keyboards. The sonorous mini-moog and mellotron intro to "Darkness/Earth in Search of a Sun" has to be one of the more dramatic album openers in modern rock, and when the sequencers rev into action and the drums (played by Hammer himself) kick in, it's hard not to experience a twin shiver of nostalgia and exhilaration.

The album is loosely drawn around the biblical myth of Genesis, with each of the seven tracks representing another day of creation. But don't worry, there's no religious agenda behind it: Hammer admits in his liner notes he was only looking for an excuse to record an LP's worth of music, and besides (he adds), each metaphorical day might have actually lasted several million years. After all, wasn't the sun itself supposedly made on the third day?

The music itself might be said to be its own eloquent act of creation. It helped to jump-start what continues to be an incredibly prolific career: check out the dizzying list of Hammer projects, both solo and in collaboration, on his pages here at Prog Archives. It's an impressive résumé to be sure, but at the top of the list his debut effort still stands apart as something truly special.
Posted by Zen Archer at 5:41:00 PM 1 comment: Links to this post 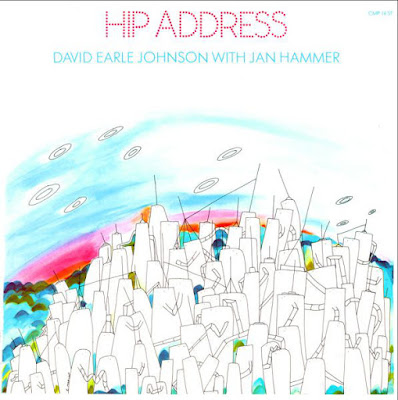 Orignally released in 1980, "Hip Address" builds on the jazz-rock fusion Hammer created with both the Mahavishnu Orchestra and Jeff Beck, adding a more percussive feel to it courtesy of Johnson. Hammer and Johnson play all instruments, with Hammer playing drums in addition to his multiple keyboards. The duo are augmented by flutist Jeremy Steig on two tunes, "Bamboo Forest" and "Hip Address" (instrumental).
Odd-metered tunes such as "Rebel Trot" and "Siete Para ti" and "Hip Address" (instrumental version) add a Latin-tinged influence thanks to Johnson's percussive assault using congas and timbales along with other exotic instuments such as an African Log, cuicas and kalimbas. Yet the music is not entirely geared towards dance-like rhythms ("Punk Luck", "Hip Address") and attempts at commercialism (the vocal tunes sung by Johnson are rather dated, but nonetheless charming in their own way). Tunes such as "Green and Black" and "Night" (the latter tune orignally from Hammer and Jerry Goodman's "Like Children" album from 1974) are displays of textures ranging from lush to moody. "Bamboo Forest" (originally released on Hammer's "Oh, Yeah?" in 1976) is a fierce jazz-rock workout with Hammer blazing with a fierce guitar-like synthesizer solo.
This is definitely worth owning for Jan Hammer fanatics such as myself. However, Johnson pulls his musical weight by adding to Hammer's frenetic energy and stimulating musical dialogue throughout "Hip Address".
Posted by Zen Archer at 5:36:00 PM 1 comment: Links to this post 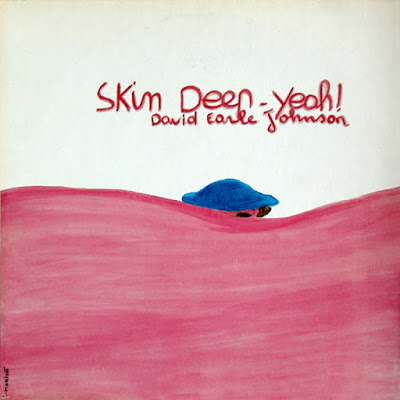 
Rare, self released album by one of the most under rated percussionists of his generation, I always had a soft spot for this album... Give it a try!
Posted by Zen Archer at 5:30:00 PM 2 comments: Links to this post 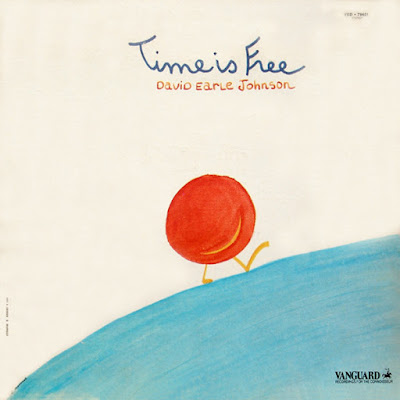 David Earle Johnson was a percussionist, a composer and a music producer. He performed on albums by a number of jazz artists in the seventies before releasing a few of his own albums in the late seventies and early eighties.

Johnson's solo debut came in 1978 with Time Is Free, recorded for Vanguard Records. His relationship with that label proved short-lived, however, and he began recording albums for other labels in subsequent years before his recording career simmered following his 1983 album, the Midweek Blues.

Johnson was against the use of sampling, as Hammer used samples of his rare Nigerian Log Drums on the Miami Vice soundtrack without his permission. This resulted in a lawsuit which Johnson ultimately lost

He was married to artist Evelyne Morisot, with whom he had four children.

David Earle Johnson is perhaps better known for who he's played with than for his solo material. This marks his first solo effort. Really not a true solo as this is more of a Johnson/Jan Hammer duet album, but Johnson gets the lead credit or only credit for most of the songs. It is a percussion driven album though with DEJ providing vocals for three tracks and JH doing the keyboard and drum kit work. Of course they have to mix it up a little - Jan plays Log on one track and David plays Moog Drum on a couple of tracks.

All of you familiar with the first incarnation of Mahavishnu Orchestra know Jan Hammer. Unfortunately, too few are acquainted with Jan's post MO albums. The first one where David and Jan worked together was on Jan's solo album The First Seven Days. I just looked it up on Wikipedia and it seem Mr. Johnson was also on an album called Voyage to Uranus the year before that one. Huh huh huh huh, huh huh, huh huh.

Time is Free was released the same year as the unfortunate Hammer album Black Sheep. Then, after this one came another fairly dreadful Hammer album and then another really good Johnson/Hammer duo album, Hip Address. Unfortunately, Mr. Johnson died in 1998, R.I.P. The guy was an excellent percussionist. Not too shabby with lyrics and vocals, either.

First up is Grandma's House. "Let's go to Grandma's house, there we can sing loud, all of the best songs." Well, not at any of my grandmother's houses, but what the heck. This one has Jan doing his trademark guitar imitation synthesizer thing. David Earle does vocals and percussion. The song shifts gears in the middle and start to get a little Mahavishnuesqe. Jan goes back to a keyboard sounding like a keyboard. David Earle does some spacey vocalizations through an Echoplex. Song then wraps up with a repeat of the opening lyrics.

Lofts is nice jazzy fusiony piece with Jan contributing drums in addition to the keyboards as he does on many of the tracks here and he did on his duo album with Jerry Goodman.

Time Is Free. "Boom boom bang bang, look out here it comes again. Can't stop the way it flows, it never knows why it goes." A fun little ditty. David Earle would go on to appear in Col. Bruce Hampton/The Late Bronze Age's Outside Looking Out, which also has Paul McCandless.

Ramtide starts with a massive sounding percussion avalanche by DE. Jan kicks in with what may be an arpeggiated synth line and also drums. Nice mostly percussion jam.

Ten Little Times is another Hammer imitating guitar bit. Johnson does a thing called a Moog Drum solo that's really cool. It may likely be heard no where else but here. More MO flavored music here.

Juice Harp. A play in words on Jew's Harp. (Probably not a lot of people familiar with that silly little instrument, akaa jaw harp or mouth harp. Supposed to be one of the oldest musical instruments in the world) I'm guessing the song was named after Jan's synthesizer impression of the instrument.

Sea, Sand and Sun. Opens with DEJ on treble kalimba solo. The a nice duo of Jan on piano and DEJ on various percussion.

Safes. Lots of cool synthesizer licks and percussion on this one. A very complex composition.

Skin, Log, Sand Street Suite. Skins must be the furious opening conga solo, the log must be the percussion duo which follows. Sand Street? Well, there's a lot of them in the U.S. Maybe referring to the one in New Orleans? Another fine song demonstrating that a song can be built with just percussion, although Jan does put in a little synthesizer. Jan's musical contribution is Hammer at his best, not like the overly commercial material he was starting to do around this time.
Posted by Zen Archer at 4:10:00 PM 2 comments: Links to this post