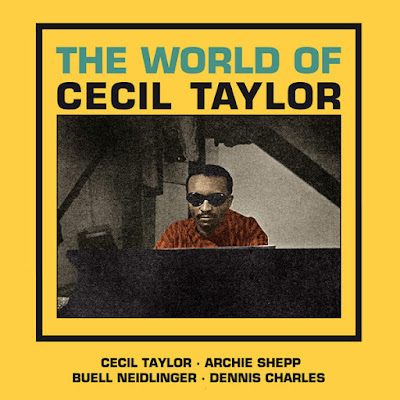 From the opening patterns of Denis Charles' drums on the title cut, the listener knows he/she is in for something special. One can only imagine what the reaction of the average jazz fan was in 1960 when this session was recorded. This is a wonderful document from early in Taylor's career, when he was midway between modernist approaches to standard material and his own radical experiments that would come to full fruition a few years hence. The quartet, rounded out by the youthful Archie Shepp (playing only on "Air" and "Lazy Afternoon") and bassist Buell Neidlinger, is already quite comfortable at pushing the boundaries of the period, giving an almost cursory reading of the themes before leaping into improvisation. The standard "This Nearly Was Mine" is explored gorgeously and with strong romanticism by Taylor, giving perhaps an indication of the source of the brief, blissful encores he would offer up to end his solo concerts in coming decades. "Port of Call" and "Eb" are both utter masterpieces showing Taylor already maintaining an unheard of mastery of the piano, musical ideas darting like sparks from his fingertips. What's extra amazing is how deeply entrenched the blues feel and pulse are in this music, already bound for the further reaches of abstraction. They never left Taylor, although many listeners have difficulty discerning them. This session, which has been released under numerous guises, is an especially fine introduction to his work, keeping enough of a foot in "traditional" jazz forms to offer one purchase while dangling breathtaking visions of the possible within one's reach. A classic recording that belongs in anyone's collection.
Posted by Zen Archer at 2:17:00 PM 1 comment: Links to this post 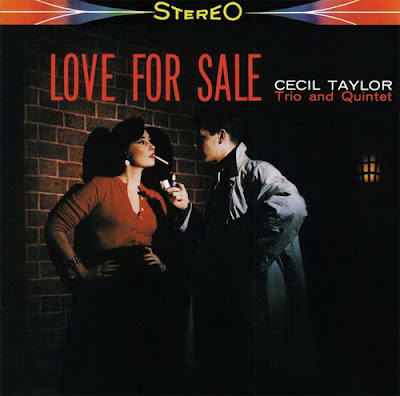 This may be the straightest record Cecil Taylor ever recorded, but it is far from uninspiring. Despite its hopelessly gauche cover -- one can only presume Taylor had no say-so in the choice of artwork used -- Taylor's approach to three Cole Porter tunes with a trio and three of his own with a quintet is a lively combination, and one which, in lieu of his later work, reveals the construction of his system of improvisation better than his later records do when he is playing from the middle of it. Accompanied by Dennis Charles on drums and Buell Neidlinger on bass, Taylor dives deep into Porter's "I Love Paris," a shifty little pop song. Taylor goes head to head with Neidlinger in a contrapuntal statement of the melody -- illustrated by chord changes which are extrapolated from the melodic sequence -- against harmony before actually flowing into the main theme of the tune for a moment before kicking the rhythm section loose and treating the tune percussively, almost as if it were a series of rhythm changes instead of harmonic ones. On the title track it's much the same, except Taylor's tenderness shines through in his lilting right hand in the middle as he trades fours with Charles. There's a wonderful cut-time tempo here, and Taylor starts building scales harmonically in his solo only to answer them with the melody and original harmony. With his own three tunes, with trumpeter Ted Curson and saxophonist Bill Barron added to the fray, Taylor takes more chances. On "Little Lees (Louise)," he scores in an elaborate melody that is played without dissonance by the horn section as he and Neidlinger play entirely in counterpoint. But here, too, there is a sublime lyricism at work; there are no extra notes or chords, and everything falls in line with the chromatic architecture Taylor composes with. "Maities Trophie" is Taylor ringing in a blues jam à la Ellington -- or at least his version of Ellington. The solos by Curson and Barron are tight, narrative, and bordering on swing, but all that's taken care of by Taylor's solo. Love for Sale is a delightful anomaly in Cecil Taylor's long career.
Posted by Zen Archer at 2:07:00 PM 2 comments: Links to this post 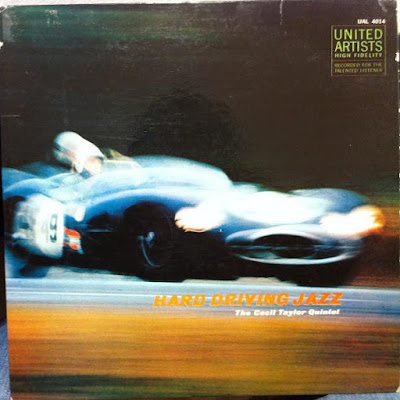 What bugs me most is that this record's reissues are mostly released under Coltrane's name. Obviously for comercial reasons they chose to released it under the bigger name of Coltrane rather than under Taylor's name.
This was a tense recording session with musicans with quite different approaches of modern jazz. Sometimes it works at others it fails, but it's always interesting to listen to. I'm glad the basic rhythm section (without Taylor) plays it pretty straight, it somehow keeps things together. It's true that Kenny Dorham (whom i adore) seems at times to be out of the places he likes to be, at others he does pretty well. It's amazing (for example on the following solis of the horns on 'Like Someone in Love') that Cecil Taylor's playing with his rhythmic and harmonic unexpected changes sound often really great behind Coltrane where he sounds like an elephant in a piano shop when he plays to Dorham's solis. All in all it didn't always work to the best of the musican's interest, but has other marvelous sequences (Taylor's solo on 'Double Clutching' for example). It's worth a try at the very least.
Posted by Zen Archer at 2:02:00 PM 2 comments: Links to this post

The Cecil Taylor Quartet
1958
Looking Ahead! 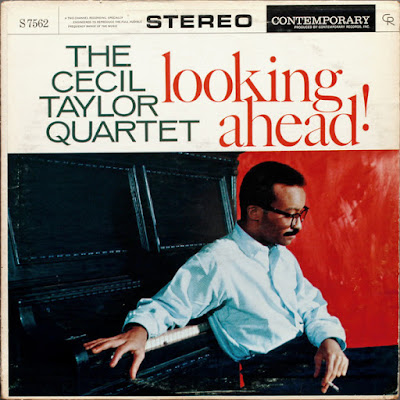 One of Cecil Taylor's earliest recordings, Looking Ahead! does just that while still keeping several toes in the tradition. It's an amazing document of a talent fairly straining at the reins, a meteor about to burst onto the jazz scene and render it forever changed. With Earl Griffith on vibes, Taylor uses an instrumentation he would return to occasionally much later on, one that lends an extra percussive layer to the session, emphasizing the new rhythmic attacks he was experimenting with. Griffith sounds as though he might have been a conceptual step or two behind the other three but, in the context of the time, this may have served to make the music a shade more palatable to contemporary tastes. But the seeds are clearly planted and one can hear direct hints of Taylor's music to come, all the way to 1962 at least (the Nefertiti trio with Sunny Murray). Pieces like "Luyah! The Glorious Step" and "Of What" are so fragmented (in a traditional sense) and so blisteringly alive that one can understand Whitney Baillett's observation of crowds at a Taylor concert fidgeting "as if the ground beneath had suddenly become unbearably hot." The contributions of bassist Buell Neidlinger and drummer Dennis Charles cannot be understated; they breathe with Taylor as one unit and appear to be utterly in sync with his ideas. When the pianist edges into his solo on "Excursion on a Wobbly Rail," it's as though he's meeting the tradition head on, shaking hands and then rocketing off into the future. Looking Ahead! is a vital recording from the nascence of one of the towering geniuses of modern music and belongs in any jazz fan's collection.
Posted by Zen Archer at 1:57:00 PM 2 comments: Links to this post