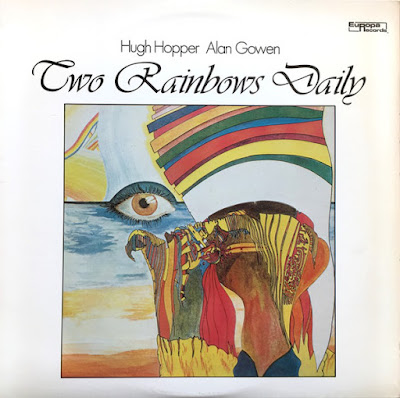 This album could've been Gilgamesh's third, had they decided to add more musicians or even another Soft Heap album, but with the notable absence of Elton Dean. . But then again, seeing (or more like hearing) the tracks present here, it surely wouldn't have a hopper Solo or a Gowen solo, as they are way too accessible for the fans of such complex artistes. Don't get me wrong I said "accessible", not easy-listening.: a whole album of just Gowen's keyboards and Hopper's bass (no tapes doodlings) is not that easy to absorb, especially that the tracks are all laid back. Is not that easy to absorb, but compared to 1984 or the first Gilgamesh, this should go down easy. With a superb and colourful artwork gracing its cover, the album was recorded in June 80
Gowen's keyboard palette includes synths (mostly MinMoog), but mostly he's still with his old Fender Rhodes and Hopper's layered basses are gentle and not too complex or fuzzy . The two buddies wrote the tracks together except for one each, and the tracks sound relatively similar, although the moods range from the laid back to trhe furiously laid back, the whole thing being a typical jazzy Canterbury album,

In the Cuneiform Cd reissue, they found a bunch of tracks recorded live some two months after the Rainbows album's recording date (and probably before its release as well), where they played some very similar music with ex-Isotope drummer Nigel Morris , and it actually adds to the overall accessibility of the their music. The five tracks, adding up to some 21 minutes are perfect companion to the album, and had you not been told they were of a different stock, you'd probably wouldn't have know. Sadly Gowen would die the next spring, these two rainbows being for his posterity. Recommended for Canterbury fans, but it might seem a bit of an anecdote to casual fans. 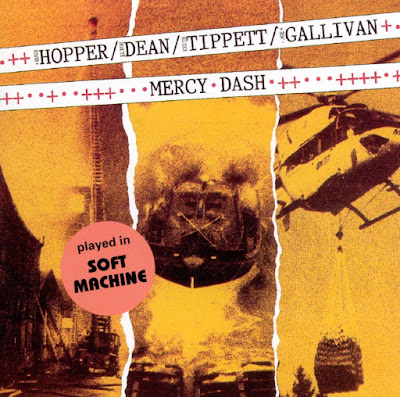 Even though this album is from many, many years ago, it's still beautiful, challenging and rewarding - and still ahead of its time. My goodness, this is avante / prog / rock - personified. The melodic nature of it, is what makes the dissonance and "free rock / jazz" so palatable to this aging proggers ears.
All members are of the highest caliber, and Keith Tippet continues to challenge me with his beautiful, dynamic playing. And what can be said, that hasn't been said about Hopper and Dean - gods of their times. Gallivan, less known, yet ever bit as creative and sold - a miracle in drummers.

I wish there would have been more of this creative group's efforts recorded. Live, this must have been magic.
Posted by Zen Archer at 11:27:00 PM 2 comments: 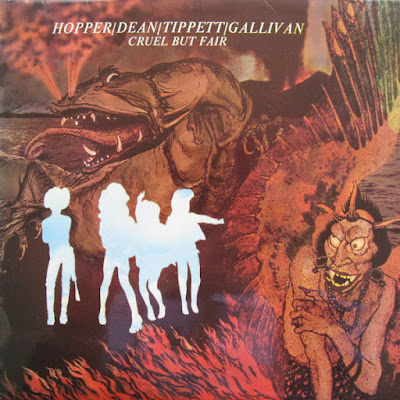 Recorded at The Basement, Oslo, October 1976

Of all the players that surrounded the Canterbury crowd, Hopper had yet to play with Keith tippet and by summer 75, this was done. Indeed if Elton had played with gallivant and Tippett and Hopper before, Hugh hadn't crossed Keith or Joe's path yet. So this first collaboration could be seen as an early attempt to form a Soft Heap, especially given that the quartet remains mainly accessible, not seeking dissonance unless necessary, the album came with an interesting artwork cover, illustrating rather well the music inside. .

So if Dean is his usual self, Hugh is definitely in an excellent shape, Gallivan is remarkable on drums, but toys with some synthesizers, it is mostly Tippett's playing that surpirise us, especially knowing that his other works of that era were Ovary Lodge and that was more in the free-jazz realm. Here Tippet plays a lot of electric piano (which is rather rare occurrence, AFAIK) and gives the album a bit of a Mwandishi-sound at times. At best, you'd swear that Tippett has gone back to his Dedicated To album and at worst,

The opening Hopper-penned Seven Drones is starting out with a semi-free jazz with dissonant sax and piano, but madness doesn'tr break loose, even if your sanity is being toyed with. But if you thought that was bad, wait until Jannakota and Dean's squeaky sax imitating birdsongs. The Tippett-penned Echoes is a slow-developing affair that drags on endlessly and is way too predictable. If the first side is made of three tracks more or less written apart and adapting their piece to the foursome, the flipside is definitely the four musicians working together as the credits point out. The album's best track is the superb Square Enough Fire, torrid jazz-rock that would easily finds its place on an early Nuclaus album. While Rocky Reclusive is borderline sane, Bjorn Free is a superb intro to the closing Soul Fate is starting out a bit dissonant, then veering Coltrane before going in an African ethnic beat drawing Elton slowly to meddle in.

While I wouldn't put this first album in everyone's hands, let alone reach everyone's ears, Cruel But Fair is a very worthy album that hovers between Canterbury-type jazz-rock and the wild works of Keith Tippett
Posted by Zen Archer at 11:23:00 PM 4 comments: 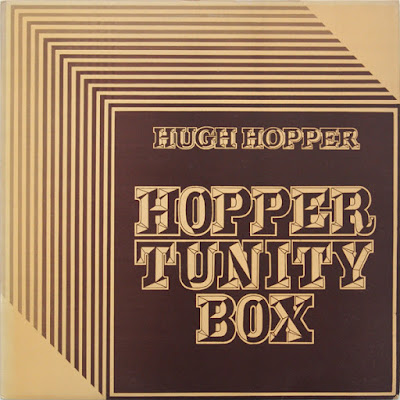 Hopper's second solo album is a much easier affair than the 1984 debut album that was released around the end of his tenure with Soft Machine, but it is much more accessible as well. I've seen this album with two different artworks (both reproduced in the excellent Cuneiform re-issue), but in the line-up, there are few usual suspects, and many first time collabs, at least on record. Indeed if Stewart, Charig, Dean, Morris and Windo are old acquaintance, there are a few names that have escaped my radar until now: Brunton, Roberts and Travis.

Opening on the very riffy title track, the mood is set on a wild and energetic jazz-rock with the usual Canterbury twists (courtesy of Stewart fuzz organ) and it is pretty announcing the color for the whole album. There is a reprise of the Miniluv track from his debut solo 1984 album that's now much in line with this album. The album seems to return to its start, where it started down with the 8-mins Gnat Prong as a trio with Stewart's Rhodes, but it resembles much the opening title track.

Elton finally appears on the calm Lonely Sea with the help of Charig on winds, but here the electric piano is held by Frank Roberts, instead of Stewart. Most interesting is the Ornette Coleman-penned Lonely women where Hopper toys with electronic drones, bass and very slowed-down triple horn section (Dean, Charig & Windo), but it's nowhere near Ornette's usual free jazz. Mobile continues in the same vein but without the horns, with Stewart and ex-Isotope drummer Nigel Morris. The album closes on the best two tracks of the album, first the energetic Spamish Knee with Charig and Dean going at it full blast and the solemnly slow bass-only Oyster Perpetual

Hopper is still working on this album with loops as he was on his first 1984, slowing and speeding them up, so it's sometimes difficult to say whether it's the band or the tape that's responsible for the tempo increase. In either case HTB is definitely an easier album to grasp and is clearly a good if not brilliant example of Canterbury sound.
Posted by Zen Archer at 11:19:00 PM 3 comments: 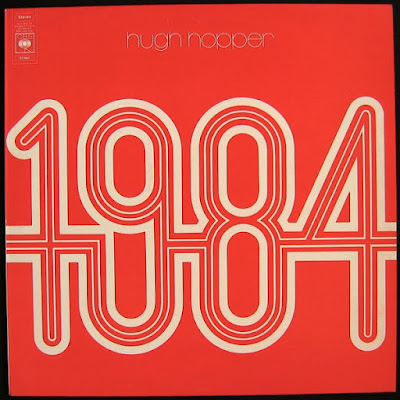 Recorded at Advision Studios, London during the months of July and August, 1972


Originally released in 1973 by the Soft Machine bassist shortly after the band had lost eccentric drummer/vocalist Robert Wyatt and had begun their evolution into a respectable (and somewhat predictable) jazz-rock ensemble, this was Hopper's attempt at something more experimental. As he reports in his amusing CD notes, the record label CBS was all in favor of his solo excursion until he let them know what he had in mind, at which point they declined to pay even for studio time, so Hopper had to take out a bank loan to make the recording -- which says a lot for Hopper's belief in his artistic vision, and not much at all for the musical (as opposed to financial) vision of CBS. Hopper's 1984 is inspired by George Orwell's totalitarian fantasy of the same name, and the two longest tracks, "Miniluv" and "Miniplenty," feature Hopper's multitracked solo work on bass, percussion, mellophone, loops and electronics, with only John Marshall, the Soft Machine drummer, contributing additional percussion on the second piece. This music had an appropriately eerie, ominous quality, with heavy use of chattering tape loops, reverberating bass drones and woozy, sometimes harsh slide work on bass guitar strings. Terry Riley's early cyclical trance music was a large influence on Hopper at the time of this recording, and there are also strong echoes of "Poppy Nogood and the Phantom Band," for example, in the intertwined, looped sax lines in "Minitrue." However, several of the shorter selections on this CD, with the addition of various saxophones, trombones and other horns, are inexplicably tied to a rather twisted and ponderous R&B groove. Hopper suggests, retrospectively, that these several pieces may have represented the "normal" citizens in Orwell's dystopia, who were nonetheless a little "bent" by their soul-destroying environment. However, it is just as likely that Hopper was simply indulging his admitted fondness for James Brown. 1984 was always a musical oddity, and it may be a little incoherent and self-indulgent at times, but it has held up well over time, and still contains music of great interest.
Posted by Zen Archer at 11:13:00 PM 2 comments: