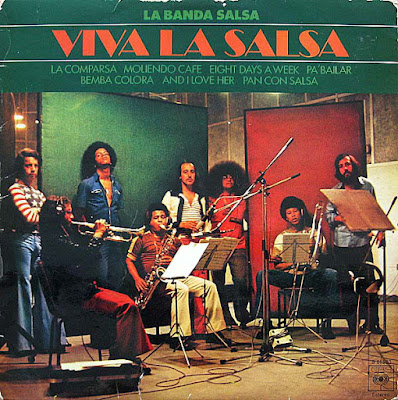 Formed in the mid-70s in Colombia , by the musicians Jaime Rodríguez and Daniel Basanta, both former Columna de Fuego. La Banda Salsa edited some singles and only one album in 1976, recorded in Spain and released there and in Brazil, unfortunately the group disbanded at the end of the decade.
Viva la Salsa brings nine short tracks, and several covers (including "And I Love Her" by The Beatles). Music, of course, is highly influenced by Latin rhythms like cumbia and salsa and funk rock. The instrumental is rich with striking metals, woodwinds, percussion, keyboard and guitar solos, accompanying lyrics in Spanish, with several moments of chorus.
Interesting gem to Latin and funk rock fans, Why hasn't this been re-released remains a mistery to me, play this monster at a party and the dance floor fills up. Absolutely love this album. recommended.
Posted by Zen Archer at 12:39:00 PM 1 comment: Links to this post