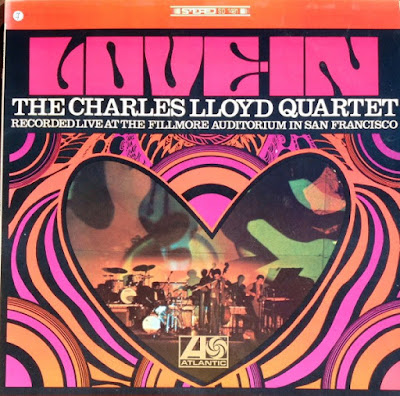 Recorded live at the Fillmore Auditorium in San Francisco

Five decades after the event, saxophonist Charles Lloyd's Love-In, recorded live at San Francisco's Fillmore Auditorium in 1967, the counterculture's West Coast music hub, endures as much as an archaeological artifact as a musical document. From sleeve designer Stanislaw Zagorski's treatment of Rolling Stone photographer Jim Marshall's cover shot, through the album title and some of the track titles ("Tribal Dance," "Temple Bells"), and the inclusion of John Lennon and Paul McCartney's "Here There and Everywhere," Love-In's semiology reeks of the acid-drenched zeitgeist of the mid 1960s, a time when creative music flourished, and rock fans were prepared to embrace jazz, provided the musicians did not come on like their parents: juicers dressed in sharp suits exuding cynicism.

It is likely that more joints were rolled on Love-In's cover than that of any other jazz LP of the era, with the possible exception of saxophonists John Coltrane's A Love Supreme (Impulse!, 1965) and Pharoah Sanders's Tauhid (Impulse!, 1967). Chet Helms, a key mover and shaker in the West Coast counterculture, spoke for many when he hailed the Lloyd quartet as "the first psychedelic jazz group."

It is to Lloyd's credit that, at least in the early stages of his adoption by the counterculture, he resisted dumbing down his music. The adoption stemmed from Lloyd's espoused attitude to society, his media savvy, his sartorial style and his sheer nerve in playing jazz in the temples of rock culture. He took the quartet into the Fillmore West three years before trumpeter Miles Davis took his into the Fillmore East—as documented on Live at the Fillmore East, March 6 1970: It's About That Time (Columbia)—by which time his pianist, Keith Jarrett, and drummer, Jack DeJohnette, were members of Davis' band (although Jarrett didn't appear at the 1970 gig).

"I play love vibrations," Lloyd told Time Magazine. "Bringing everyone together in a joyous dance."

Lloyd certainly talked the talk, but whether he actually conducted his affairs in accordance with the countercultural principles he professed has been disputed. In his biography Keith Jarrett: The Man and His Music (Grafton, 1991), Ian Carr reported disturbing allegations by Jarrett, bassist Ron McClure and DeJohnette. The trio, interviewed separately, told Carr, in some detail, how Lloyd concealed the scale of the quartet's appearance fees and kept the lion's share of earnings for himself, while generally treating the musicians, who, perhaps naively, believed they were partners in the enterprise, like the hired help. Carr concluded that, despite Lloyd's image as a new kind of musician, he behaved like "the old (discredited) kind of jazz bandleader."

So Love-In comes with a load of baggage, some of it less than fragrant. But as 45 minutes of music, it still has legs. Lloyd's vocalized tenor (and flute on two tracks) has Coltrane-derived muscle; the young Jarrett's lyrical and funky solos, particularly on his 07:55 showcase, the gospel-ish "Sunday Morning," his two featured originals ("Sunday Morning" and the soul jazz-ish "Is It Really the Same?"), and his playing the strings of the piano directly with his hands, all remain compelling; McClure and DeJohnette are solid and inventive.

Two years after Love-In was recorded, Lloyd's quartet, fractured by disputes between leader and sidemen, imploded. Lloyd himself recorded little of note for almost twenty years, before he reemerged in 1989 with Fish Out of Water on ECM, for which label he continues to make music perhaps even lovelier than that he created in the 1960s.

The Charles Lloyd Quartet - 1967 - Journey Within

The Charles Lloyd Quartet
1967
Journey Within 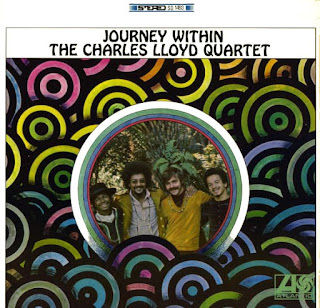 A great 60s moment not just for reedman Charles Lloyd, but also for pianist Keith Jarrett – who was a key part of Charles' group for a few years at the time – and who really opens up on this classic set! Tracks are long and very open – reaching in a spiritual sort of way with definite Coltrane overtones, yet also showing that more complexly rhythmic mode that made Lloyd a standout in previous groups before he was a leader – a quality that's really augmented by the presence of Jack DeJohnette on drums! Lloyd plays both tenor and flute – and Jarrett switches to soprano sax on one number!
Posted by Zen Archer at 9:59:00 PM 2 comments: 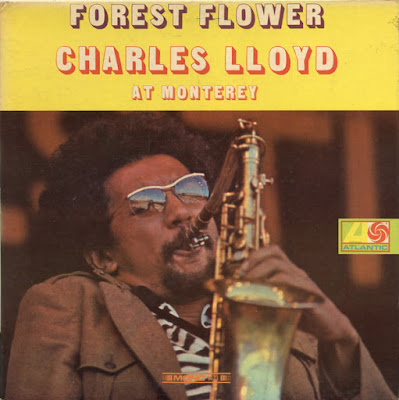 When Charles Lloyd brought his new band to Monterey in 1966, a band that included Keith Jarrett on piano, Jack DeJohnette on drums, and the inimitable -- though young -- Cecil McBee on bass, no one knew what to expect. But they all left floored and this LP is the document of that set. It is difficult to believe that, with players so young (and having been together under a year), Lloyd was able to muster a progressive jazz that was so far-reaching and so undeniably sophisticated, yet so rich and accessible. For starters, the opening two title tracks, which form a kind of suite (one is "Forest Flower-Sunrise," the other "Sunset"), showcased the already fully developed imagination of Jarrett as a pianist. His interplay with DeJohnette -- which has continued into the 21st century in a trio with Gary Peacock -- is remarkable: whispering arpeggios surrounded by large chords that plank up the drumming as DeJohnette crosses hands and cuts the time in order to fluctuate the time. Lloyd's own solos are demonstrative of his massive melodic gift: his improvisation skirted the edges of what was happening with Coltrane (as everyone's did), but his own sense of the deep wellspring of song and the cross-pollination of various world musics that were happening at the time kept him busy and lyrical. Elsewhere, on Jarrett's own "Sorcery," his linking front-line harmonics with Lloyd is stellar -- this isn't communication, it's telepathy! Jarrett's angular solo is buoyed up by Lloyd's gorgeous ostinato phrasing. By the time the band reaches its final number, a sky-scorching version of Brooks Bowman's "East of the Sun," they have touched upon virtually the entire history of jazz and still pushed it forward with seamless aplomb. Forest Flower is a great live record.

Recorded live at the Monterey Jazz Festival in 1966, Forest Flower was the jazz soundtrack of the Flower Power movement. Always accessible and majestic, the Charles Lloyd Quartet was recorded here at the peak of its powers. The title track, "Forest Flower," actually is split into two parts, "Sunrise" and "Sunset," which merge together seamlessly to form a single piece of astonishing unity, with Charles Lloyd, Keith Jarrett, Cecil McBee, and Jack DeJonette playing beyond the point of empathy. There is such sheer beauty and lyricism in the music that 30 years later it still gives goose bumps. It is almost impossible to be unmoved by "Forest Flower—Sunset," particularly when Keith Jarrett reaches inside the piano to pound out extraordinary sounds.

The music, like the band itself, is so fresh and innovative that it caused a mighty stir, eventually reaching Miles Davis himself. Miles picked up on Lloyd's sound and energy, ultimately recruiting DeJohnette and Jarrett, and moving forward to launch the musical revolution known as Bitches Brew. But before all of these radical changes, there was Lloyd, who deserves credit for dramatically expanding the audience for "jazz" to include the hordes of acid-dropping, long- haired children of the 60s. Lloyd built up a new market for jazz artists, inadvertently paving the way for the commercial success of fusion. There are unmistakable elements of rock in the rhythms of DeJohnette and Jarrett, particularly on "Sombrero Sam," but this is not fusion.

Lloyd plays the tenor with a heavy dose of Trane, but never in a way that sounds derivative. Still, it is in his flute playing, as evidenced on "Sombrero Sam," where Lloyd really shines in his individual brilliance. This album captures the spirit of the 60s without sounding the least bit dated. Check it out!
Posted by Zen Archer at 9:52:00 PM 3 comments: 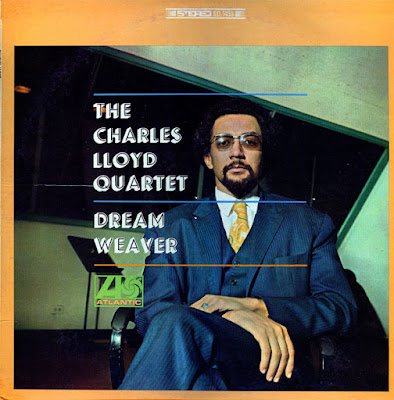 The first studio date of the Charles Lloyd Quartet, with Keith Jarrett, Cecil McBee, and Jack DeJohnette, was recorded and released just a few days before the band took both the European and American festival circuits by storm. First came Europe, which was just getting the disc as the band was tearing up its stages. While the live dates are now the stuff of legend, it's easy to overlook the recordings, but to do so would be a mistake. Dream Weaver is a fully realized project by a band -- a real band -- in which each member has a unique part of the whole to contribute. Jarrett's unusual piano style fits musically with Lloyd's lyricism in a way that it shouldn't. Jarrett was even then an iconoclast, playing harmonic figures from the inside out and relying on counterpoint to create new spaces, not fill them in. (Just listen to "Autumn Sequence," where his solos and his backing harmonics are equally strident and inventive as Lloyd's Eastern explorations of mood and mode.) And then there's the rhythm section of McBee and DeJohnette, whose modal inventions on the intervals make the "Dream Weaver" suite an exercise in open time, allowing all players to wander around inside it and take what they want out. The set closes with a group party jam on "Sombrero Sam," with Lloyd and Jarrett trading eights on a Cuban variation on a fantasia. There were no records like this one by new groups in 1966.
Posted by Zen Archer at 9:48:00 PM 2 comments: