The Charles Lloyd Quartet
1965
Of Course, Of Course 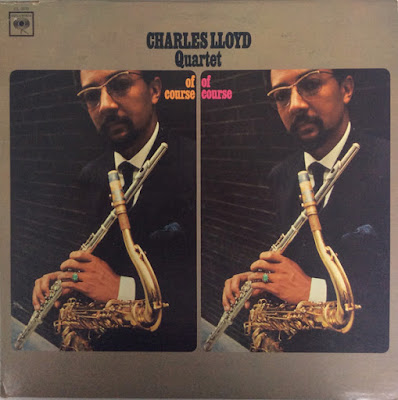 Charles Lloyd's second album as a leader teams him with guitarist Gabor Szabo (his old friend from the Chico Hamilton group), bassist Ron Carter, and drummer Tony Williams. Although Lloyd was still a member of Cannonball Adderley's group, his playing on the set shows that he was clearly ready to become a leader. Seven of the nine diverse compositions are his originals; he takes "The Things We Did Last Summer" as a duet with Szabo and rips through "Apex," a trio number without the guitarist, but it is this cut most certainly reflects Ornette Coleman's influence (whereas Lloyd and everyone else who played tenor were being written about in the shadow of Coltrane). Certainly Coltrane's flurry of notes and deconstruction of chords is evident in places, but here, it is Coleman's unshakable sense of melody and rhyme that is most prevalent, and it sports is a brief but wonderfully woody solo by Carter. Other notable selections include "Goin' to Memphis" and Sammy Kahn's "Things We Did Last Summer" (where, according to Stanley Crouch's new liner notes, the saxophonist directly quotes the melody of Coleman's "Free at 3:00 of..."). Other cuts that really stand out here are the title track and the serious blowing session of "One for Joan," where the twinning and counterpoint interplay between Szabo and Lloyd is almost synchronous. Whether on tenor or flute, Lloyd was quickly coming into his own as an original voice, and this underrated set is a minor classic. [In 2007, Mosiac Records in its Singles series, reissued the recording for the first time on CD. In addition to a beautiful remastering job that is warm and clean, there are three bonus tracks also recorded in 1965 but not released until Lloyd's Nirvana album in 1968. Two of these, "Island Blues," and "Sun Dance" feature Albert Stinson on bass and Pete La Roca on drums in place of Carter and Williams. Another oddity is that in addition to Szabo's guitar playing, the Band's Robbie Robertson makes an appearance on the Caribbean-flavored latter tune. The other bonus cut, "East of the Sun and West of the Moon," uses the primary rhythm section, and was recorded for the original session, and left off the final version of the LP.]

It's unfortunate that, of all of the fantastic albums Charles Lloyd made as a leader in the sixties, this one, his second, is so hard to find. Mosaic made a small batch in the late 2000s (that quickly sold out), and now that same mastering is being released in Japan at a decent price. Why would a record featuring Tony Williams on drums, Ron Carter on bass, and Gabor Szabo on (amazing) gypsy-esque guitar get so overlooked? It turns out that there's something of an answer.

Prior to this album, Lloyd had been making surprisingly intense music with a Chico Hamilton band that included Szabo (and Albert Stinson), and sometimes trombone. These records (especially "Man of Two Worlds") would integrate Coltrane-style modal work with a surprisingly fiery band, and all four albums with that lineup should be purchased before this one. Lloyd then made two albums for Columbia that are both very good, but are both substantially more commercial than the albums with Hamilton. The recently issued (and VERY wonderful) live recordings made around this time with Szabo and Carter joined with drummer Pete LaRoca seem to blame Columbia records for this, as Lloyd is in high energy live with much the same band, moving into (light) avant-garde territory and lots of depth. So is this worth the time then?

Of course, of course. Lloyd has some terrific originals paired with more commercial covers, and the first half in particular (especially the surprising duet with Szabo on "The Things We Did Last Summer") really gets it. "Apex" has a nice fire to it, and the title track has been re-covered by Lloyd throughout his career for a reason: it's one of his best. The second side, though, cools a bit much. Nothing's wrong, of course, but even Williams can't seem to get worked up in the blues workout "Third Floor Richard", and the way the band tears up the stage on the live set, it's clear that they're holding back a bit. That Lloyd got dropped by Columbia before he could complete a third record that fall (later released as most of "Nirvana") is telling to the concern Lloyd must have had with staying on the label. Still, this is a good one, and fans of any of these musicians can be recommended to buy it. First, however, consider those amazing Hamilton records, or pick up "Manhattan Stories", which contains the two live sets referenced above. By the time of his next studio record, "Dream Weaver", Lloyd would have his "classic quartet" gathered, and he would make no less than seven live albums in three years after, showing the love the public gave that band. But first he was here, and if nothing else it shows a major artist in transition, not quite as strong as he soon would be.
Posted by Zen Archer at 2:49:00 AM 3 comments: Links to this post 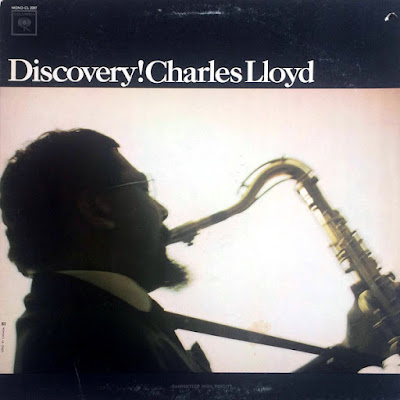 Charles Lloyd's recorded debut as a leader was made while he was a member of the Cannonball Adderley Sextet. Doubling on tenor and flute, Lloyd teamed up with pianist Don Friedman, either Eddie Khan or Richard Davis on bass, and Roy Haynes or J.C. Moses on drums. This out of print LP has among its highlights "Little Piece" (dedicated to Booker Little), "Days of Wine and Roses," "Sweet Georgia Bright," and the initial full-length version of "Forest Flower." Lloyd's Coltrane-inspired sound was already in place, and his flute playing was becoming distinctive. The music is essentially melodic but advanced hard bop, a strong start to an important career.
Posted by Zen Archer at 2:23:00 AM 1 comment: Links to this post 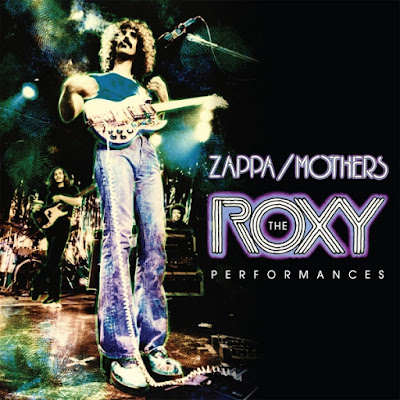 The Roxy concerts were previously featured on the 1974 live album Roxy & Elsewhere as well as the posthumous releases Roxy by Proxy and Roxy the Movie. However, the seven-CD The Roxy Performances marks the first time Zappa and the Mothers' Roxy residency has been released in its entirety.

"This is one of my favorite FZ line-ups ever. This box contains some of the best nights of music Los Angeles has ever seen with their ears at an historic venue," Ahmet Zappa said in a statement. "Hold on to your hotdogs people. This box is the be-all-end-all. This is it. This is all of it. It's time to get your rocks off for the Roxy."

In addition to the four performances spread over December 9th and 10th, 1973, the box set also features recordings from a December 8th film shoot and soundcheck from the venue, as well as material laid down on December 12th at nearby Bolic Studios, where Zappa and company worked on songs that would appear on 1974's Apostrophe. 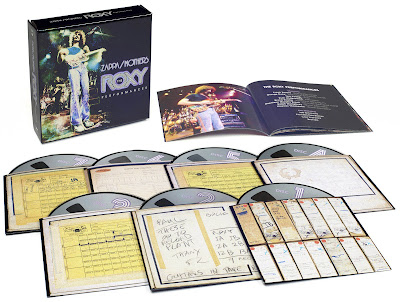 Give it a quick listen on Spotify and if you like it go buy it at Zappa.com