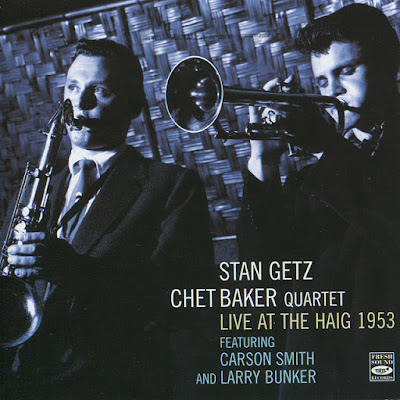 Tracks from this residency at the Los Angeles club The Haig have previously been released by the Italian label Philology but with a different drummer and bass player. The sound quality on this release is far superior, the players contributions are much sharper and the drummer, Larry Bunker is much more to the fore in the mix without being intrusive.

This particular line-up came about as Gerry Mulligan took time out to rid himself of his addiction and recommended Stan Getz as his replacement during his absence.

Getz was an ideal replacement on a musical level but his personal relationship with Baker was far from an easy one. Apart from his work with Bob Brookmeyer and possibly J.J.Johnson, Getz always sounds much more at home in the quartet formation and the absence of a piano may also be a factor. It is not that Getz plays badly but he does not appear to be comfortable in this particular format.

Getz covers much the same role as Mulligan constantly prodding Baker with his interjections behind Baker’s solos as Baker does likewise behind Getz, but with less urgency than on the Mulligan / Baker recordings.

Many of the same numbers are used on this recording as were used by the original Quartet and possibly the same formant with much of the counterpoint passages which were such a feature of the original.

It is probably unfair to compare the two quartets but it is but it is impossible with them having so much in common.

It is possibly because of more chamber music style of both quartets that there is a feeling of the soloists holding back particularly in Getz case of their natural exuberance is not in evidence and possibly the absence of the piano.

“Little Willie Leaps” is one of the livelier tracks and both Getz and Baker have interesting solos and with some fine exchanges.

On “The Way You Look Tonight” turns in one of his best solos on the album which encourages to up his game and make this track the best on the recording.
A word of praise for drummer Larry Bunker whose good taste andhis backing is one of the features which lift this album.

This album must be judged not as two separate Quartets but merely as a live recording which has Getz as a replacement for the unavailable Gerry Mulligan and on that basis Getz was an ideal replacement and the Quartet acquits itself well.