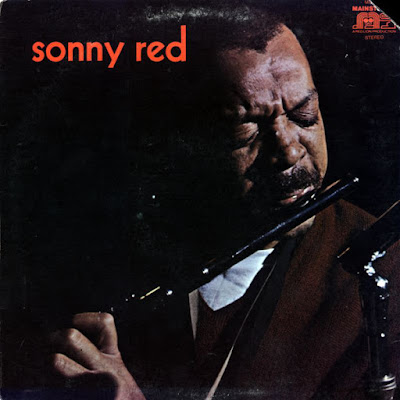 If you're unfamiliar with the name, you're not alone. Obviously we're not talkin' 'bout the French metal band nor the thoroughbred nor the Bonanno mob family capo Alphonse Indelicato nor the heavily tattooed rapper nor the country/blues harmonicat. That sentence alone illustrates the point made in more than a few biographical pieces on Sylvester Kyner: struggling to get noticed despite instrumental proficiency, compositional skills and the ability to enlist top-tier talent, his generic name didn't do much to help him stand out from the crowd. In this day and age, when "Sonny" and "sax" are mentioned in the same breath, one is more likely to immediately think of Rollins, Stitt, Criss or maybe even Fortune.

However, Kyner seems to have made a memorable impression on those with whom he worked, especially upon the wife of a fellow alto player from the NYC scene it would seem since Gloria Coleman composed a track called "Hey Sonny Red" for Soul Sisters, her debut on Impulse! records. Sonny had made his way out to the big apple about five years before this was cut and worked with a lot of the same folks. Wonder how her hubby George felt about that? BTW, Coleman also released a cookin' album for Mainstream, Swings and Sings Organ.

Musician and scholar Ivan Svanoe wrote the definitive piece on Red, so the minimal biographical info I could find on him would be a drop in the Bluesville: The Journey of Sonny Red bucket. The following is taken from the Mississippi Rag's coverage of Annual Review of Jazz Studies #13 published in 2003:
The longest essay is a thorough oral history of the modern alto sax player Sonny Redd (or Red), aka Sylvester Kyner (1932-81), Anders Svanoe's "Bluesville: The Journey of Sonny Red." Born in rural Mississippi in 1932, Redd grew up in Detroit and moved to New York City in 1957 to enter the burgeoning modern jazz scene there. He played with major musicians, recorded and was generally known as a capable and entertaining musician, but there was by then a glut of post-Parker alto players and Redd never established an identity with the jazz audience. Nevertheless, he persisted stubbornly in the music, becoming "a jazz survivor" in one commentator's words.

Svanoe's history is very thorough, with many interviews, photographs and other documents, 40 scores of compositions and solos (including scores to several flute quartets) and an annotated discography of Redd's work. The essay runs to 145 pages, virtually a whole monograph and is very well organized and readable. It is an interesting scrutiny of a workaday musician who was not a "jazz giant" or a publicity hound but who made a highly individualistic contribution to modern jazz.

AMG Bio
by Scott Yanow
Sonny Red was a good but not great altoist who was somewhat lost in the shuffle in the 1960s and '70s. He worked in Detroit with Barry Harris (1949-1952), in 1954 temporarily switched to tenor while with Frank Rosolino, and later that year joined Art Blakey briefly. In 1957, with his arrival in New York he gained some recognition, recording with Curtis Fuller and Paul Quinichette, in addition to having several dates as a leader (1958-1962) for Savoy, Blue Note, and particularly Jazzland. Despite some freelancing and recording with Clifford Jordan, Pony Poindexter, Donald Byrd, Kenny Dorham, and Yusef Lateef among others in the 1960s, Red was in obscurity by the 1970s.

To illustrate just how obscure, one of the only reviews conjured up for this particular session (recorded at the East Coast Record Plant in the last week of June '71 and released the first week of September) was found in the April 1972 issue of Black World magazine:
The liner notes indicate that Sonny Red (Mainstream), a.k.a. Sylvester Kyner, is a "Detroiter who has been around for many years, but has been out of the limelight for too many of them," Yes, it would seem so. "Love Song," overdubs Sonny Red on both alto sax and flute, the result a lush, Pharoah Sanders-like quality accented beautifully by pianist Cedar Walton, bassist Herbie Lewis, and drummer Billy Higgins. "Mustang" should please the foot-tappers, and "A Time For Love" the romantic. In fact, the whole album is a sign: "Quiet. Serious men at work."