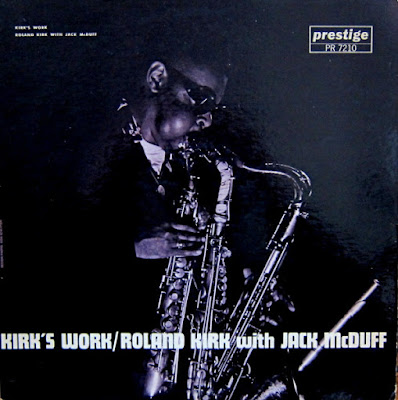 Technically his third album, following Introducing Roland Kirk (Chess, 1960), and a previously unissued R&B session (Triple Threat), Kirk's Work pre-dates the boundless surrealism of his post-Rahsaan era. Sharing the bill with organist Jack McDuff, the record is commonly regarded as a fairly straight-ahead date made years before Kirk gradually transformed from a stunning virtuoso multi-instrumentalist into an iconic musical shaman. While not as outrageous as some of Kirk's later albums, this sublime 1961 date has its fair share of unusual subtle surprises, providing a few early examples of the man's twisted genius.

Already displaying remarkable prowess on his menagerie of thrift-store horns (manzello, stritch, siren), Kirk displays each to its own effect. His ability to play two and three saxophones at a time is already apparent, although his mastery of circular breathing was still a few years away. He limits his doubling to supportive riffing, rather than intertwining solo counterpoint, but the distinctive sound of his massed horns is still present.

The rhythm section contributes heavily to the session, providing more than just run of the mill backbeats for Kirk to riff over. Jack McDuff's greasy down home organ instills the session with a buoyant sensibility, celebratory and optimistic. Benjamin and Taylor are a tight, snappy rhythm section, Taylor strikes hard and deep, sounding at times like Roy Haynes. "Doin' The Sixty-Eight" finds the rhythm duo deep in a pulsating polyrhythmic groove, dragging Kirk and McDuff headfirst into the infectious Latin rhythms.

A solid and infinitely enjoyable album easily overlooked in the massive and convoluted discography of such a diverse artist, Kirk's Work is more than just an embryonic session. It's an accessible classic, the sort of unconventional soul jazz/hard bop hybrid that only Roland Kirk could deliver.

Kirk's Work, Rahsaan Roland Kirk's third long-player, teams him up with organist "Brother" Jack McDuff for Kirk's most soulful post-bop set to date. His unorthodox performance style incorporates the polyphonies of a tenor sax, flute, manzello, and stritch. (The latter instrument is Kirk's own modification of a second-generation B-flat soprano sax.) This contributes to the unique sonic textures and overtones Kirk creates when playing two -- and often three -- of those lead instruments simultaneously. The loose and soulful nature of McDuff's Hammond organ lends itself to the swinging R&B vibe pervasive throughout the album. Completing the quartet is Joe Benjamin (bass) and Art Taylor (drums), both veteran jazzmen in their own right. They lend their expertise as well as innate sense of rhythm to the up-tempo "revival meetin'" rendition of Sammy Kahn's "Makin' Whoopee" as well as the ominous swing of the title track. This is also an ideal showcase for Benjamin and Taylor's running counterpoint that glides throughout -- supporting soloists Kirk and McDuff. Of the four original Kirk compositions, "Doin' the Sixty-Eight" is arguably the strongest. The percussive rhythms weave a hypnotic Latin groove over which Kirk and McDuff both snake some highly cerebral solos. The stellar interpretation of "Skater's Waltz" combines a well-known traditional melody with some of the most aggressive interaction from the quartet. The tune is put through its paces and the tenor sax/Hammond organ leads bounce around like a game of sonic ping pong. The more aggressive performance style that Kirk would later incorporate definitely shows signs of development on Kirk's Work. While certainly not the best in his catalog, it is a touchstone album that captures the early soulful Rahsaan Roland Kirk.