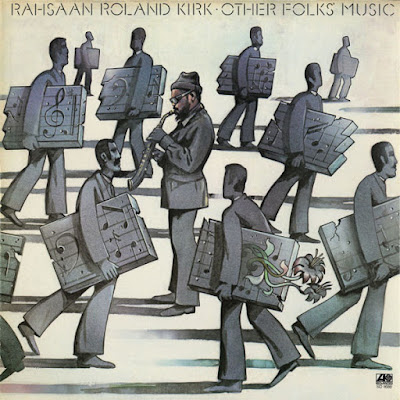 From Roland Kirk's "classical" period, Other Folks' Music is perhaps his most dizzying and troubling recording. Meant to be both a tribute and a pointer for the next move in modern black music, Other Folks' Music is, when all is said and done, a very private altar adorned with much of Kirk's personal iconography. Recorded in 1976 using a fairly large band supplemented by Hilton Ruiz' funky Latin angularity on piano, Kirk created a lament and a testimony for other artists to add to -- though no one ever has, and certainly not Wynton Marsalis. The set opens eerily with the deep voice of Paul Robeson scratchily coming from a record player on "Water for Robeson and Williams." The largely chamber piece is a folk melody, mournfully suggestive of a slave song turned in on itself so that it now echoes out over history. It's followed by a shimmering, ethereal version of "That's All," with Trudy Pitts on electric piano. Kirk's own solo comes from the heart of the swing tradition. It's easy to hear both Coleman Hawkins and Lester Young in his alternating bars, whipping up a legato frenzy in the eternally shifting intervals. All bets are off as Kirk and company tear funkily into Charlie Parker's "Donna Lee," done as a quick, steamy, and very fiery rhumba/son combo with Ruiz and Kirk's flute leading the way until Richard Williams' reedy trumpet kicks out of the percussion mix -- featuring Roy Haynes and Sonny Brown on drums -- and sends it spiraling into pre-Castro Cuba until Kirk can bring it back to a present-day party. Charlie Parker's not forgotten here -- he's just nodding in a corner with a beer in his hand. The disc closes with the slickly arranged and stridently weird "Arrival," which must have been a comment on UFOs or something with all of its sound effects underlying a straight-ahead swinging hard bopper with great solos from Williams and Kirk on flute, tenor, and manzello. With all the accessibility of the music, the earlier notation about its being troubling has become so. But in all of Kirk's moods and segues, his usually indelible mark of inseparability -- the trace that says that this is all one music and we are all one people -- is missing here, and the listener can feel the separation between tracks, and sometimes inside the tracks themselves. The music is still topnotch, but that nagging ghost of isolation on Other Folks' Music can still haunt the listener.
Posted by Zen Archer at 5:51:00 PM