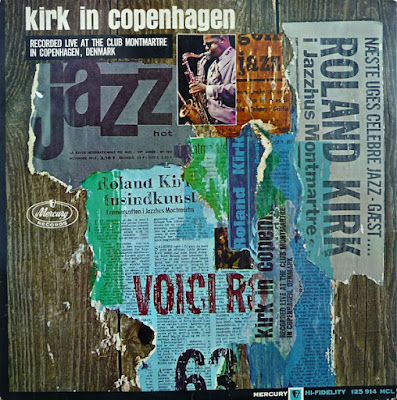 In addition to being Roland Kirk's first live long-player, the breakthrough Kirk in Copenhagen was his fifth in a little over two years during his particularly prolific relationship with Mercury Records. On this 1964 release, Kirk heads up a truly integrated quintet featuring the multi-reedsmith (tenor sax, flute, manzello, strich, nose flute, and siren) as well as Tete Montoliu (piano) from Spain, Niels-Henning Ørsted Pedersen (bass) from Denmark, and a pair of Yanks in Don Moore (bass) and J.C. Moses (drums). The dementedly humorous blues workout on "The Monkey Thing" features a character by the name of Big Skol (mouth harp) -- whose true identity is none other than Sonny Boy Williamson. It is presumed that contractual or other potentially litigious circumstances prevented the blues legend from being properly credited at the time of this LP's initial release. Although somewhat ragtag in derivation, the combo quickly finds its sonic niche. The opener, "Narrow Bolero," audibly suffers from a rhythmically disoriented Moses, whose sloppy skins and decidedly uneven timing are brutally evident on occasion. Thankfully, he quickly smartens up and his contributions -- especially to "Cabin in the Sky" -- are both engaging and active in their solidification of the rhythm section. Nowhere is Moses more in control than the set's brilliant conclusion, "On the Corner of King and Scott Streets." The band commences and concludes with an open throttle as it blazes through the high-velocity and densely intricate jam, the bottom of which falls out, providing Kirk plenty of space to improvise wildly, utilizing his clever wit and immensely expressive musicality. The ten-CD Rahsaan: The Complete Mercury Recordings of Roland Kirk box set from 1990 embellishes the half-dozen performances included on this album with an additional ten sides. Ultimately, this yields over an hour and 45 minutes of primal live Kirk, and is considered by many enthusiasts as worthy of the nominal investment needed to acquire the otherwise essential and definitively comprehensive compilation. Kirk in Copenhagen was reissued on CD as part of Verve's classic reissue program in a limited edition with beautifully remastered sound in a digipack replica of the original LP sleeve. 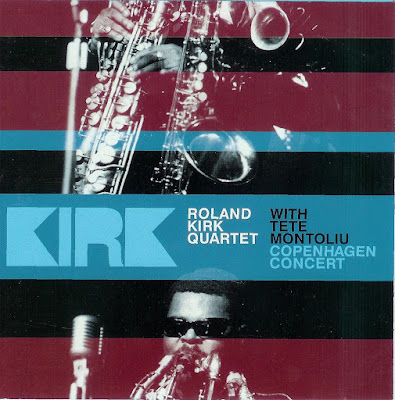 There are many wonderful ways to get acquainted or stay in touch with the spirit of Rahsaan Roland Kirk. For a truly mind-altering and life-changing listening experience, try this Lone Hill Jazz double-CD reissue of Kirk's amazing performances recorded live at the Club Montmartre in Copenhagen on October 24 and 25, 1963. (Present in the audience on the second night was John Coltrane, who was resting his chops after playing the Tivolis Koncertsal.) Earlier that year, Kirk was working out of Chicago when a promoter from Sweden heard him and suggested a Scandinavian tour. By late September Kirk was in London playing to packed houses at Ronnie Scott's and the Marquee Club. The tour then expanded as Kirk roared through Italy, France, Belgium, Germany and Holland in addition to Sweden and Denmark. Fortunately, Quincy Jones arranged for the Copenhagen Concert to be recorded, preserving for posterity the magical interplay between this joyously driven multi-instrumental Ohioan and the Barcelona-born pianist Tete Montoliu, bassists Don Moore and Niels-Henning Ørsted Pedersen, and drummer J.C. Moses, who by the end of the decade would serve as the house drummer at Café Montmartre. Two tracks feature special guest blues harmonica legend Sonny Boy Williamson, identified on most previous issues only as 'Big Skol'. The gutsy combination of Kirk and Williamson on "Untitled Blues" and "The Monkey Thing" is a spicy treat that meshes nicely with Williamson's other European and British adventures in the company of Memphis Slim, Eric Clapton, the Yardbirds, and Eric Burdon & the Animals. According to what Kirk says by way of introduction, he and Sonny Boy Williamson had previously gigged together in Milwaukee, which makes their Danish rendezvous somewhat of a reunion jam. Every aspect of Kirk's artistry is documented on the Copenhagen recordings -- gorgeous ballads, gleefully reconstituted standards and fiery originals. Essential features are his supreme one-man three-sax and flute adaptation of "Mood Indigo," a bouncing medley that opens with a rousing "Rock-A-Bye Baby" and Kirk's blustery, screaming over-the-top flute solo during "On the Corner of King and Scott Streets." This edition also contains two exciting bonus tracks: a sunny seven-minute version of "A Stritch in Time" recorded live at the 1962 Newport Jazz Festival, and a rare recording of a nearly 15-minute jam on Charlie Parker's "Au Privave," tape recorded by an enterprising amateur at a gig in Berlin on September 24, 1964. In addition to Tete Montoliu, bassist Jimmy Woode, and drummer Kenny Clarke, this steamy blowout features alto saxophonist Sonny Stitt. Those who really love their jazz will want to absorb this track in all its muddy-sounding "bootleg" splendor, as this is the only known recording of Sonny Stitt and Rahsaan Roland Kirk performing together. Don't miss it.
Posted by Zen Archer at 3:05:00 AM