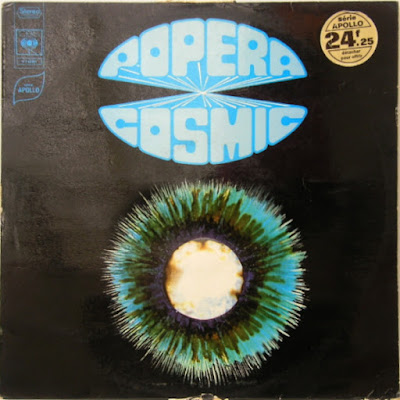 For the few people lucky enough to have heard the entire album in the five decades since its release, the mythical Popera Cosmic LP is now considered to be France’s first dedicated psychedelic album and the shrouded blueprint for the hugely influential Gallic concept album phenomenon that followed – including Serge Gainsbourg’s Histoire De Melody Nelson and Gérard Manset’s La Mort D’Orion.
Spearheaded by François Wertheimer (songwriter for Vangelis, Barbara and BYG Records), composed with future Jodorowsky soundtracked and genius all-rounder Guy Skornik, and based on an embryonic concept co-conspired by a teenage Jean Michel-Jarre, this instantly deleted 1969 recording is a true essential for any outernationalradicalised record collection. With credentials that mark the birth of the cosmic funk (later disco) that helped shape the influential sound of France today, this LP also includes the first pressed instrumentals by members of Space Art, some of the best orch rock arrangements by William Sheller (Lux Aeterna, Eriotissimo) and orchestrator Paul Piot (Jean Rollin), as well as sitar psych benchmarks courtesy of uber legend Serge Franklin – all pinned down by the rhythm section that would later be known to prog aficionados as Alice.
Subtitled Les Esclaves (The Slaves), this street theatre/rock opera (influenced by the work of Julien Beck’s Living Theatre) now celebrates its 50th birth-day standing firmly as a sonic tome to the birth of the no-no era (that rebuked France’s yé-yé hamster wheel) leading directly to the thematic progressive network of Wakhévitch, Manset and Magma while comprising an inter-Gallic intergalactic super group from the early annals of France’s pop psych revolution. Imagine a rock opera where the cast of Mister Freedom perform Clash Of The Titans at the foot of The Holy Mountain – then pinch yourself…

Finders Keepers have never shied away from prog or concept albums before, but they’ve netted themselves something of a big fish in terms of psychedelic classics here. Popera Cosmic was a landmark album that helped shape the French psychedelic direction that would follow – from Serge Gainsbourg through on to Jean Rollin, Gong and Magma, this stands as the germ that began many musicians’ journeys. The record is headed by songwriter Francois Wertheimer, who would go on to write for Vangelis and was a fixture at BYG records. He paired up with Jodorowsky collaborator Guy Skornik and the two based the record on a concept from a young Jean Michel-Jarre.

As for the record itself, its up there with the most outre psychedelic pieces. The album was inspired by French street theater in its narrative and sweeps through styles from blistering psych freakouts to barroom sing-a-long and lush orchestral folk with string arrangements courtesy of William Sheller and Paul Piot. Further support comes from the rhythm section from French prog legends Alice, who keep the record clicking through its stylistic changes flawlessly and add a dose of heaviness on the psych-stompers.

The record was instantly deleted at the time of its release and lay as a collector’s totem until now, so it seems high time this was available on a wider basis. Beyond fans of the French psychedelia this would influence, those who have been in thrall of The Holy Mountain, SF Sorrow or Head can feel free to dig in. Or, if you wish there existed a mash of Gong’s Flying Teapot, Les Mis on a heavy head of DMT and Haphash and the Coloured Coat, look no further.
Posted by Zen Archer at 4:17:00 AM