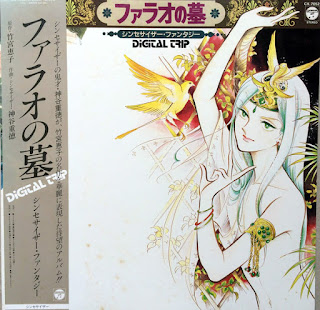 
Kamiya Shigenori, synthesizer master, released one more album of synthy goodness before returning to his career as a jazz guitarist - at least, as far as I've been able to tell, since finding details on him has been very difficult all these years. This one came two years after MU, during which time Kamiya was incredibly busy still doing advertisement soundtracks as well as taking part in Wha-ha-ha - note his picture on the insert! This time around, it's produced for Columbia's "Digital Trip" series, which collected synthesizer-based interpretations of anime and manga, whether arrangements of anime soundtracks on synthesizer, or "image albums" composed to accompany a manga. This album is the latter, meant to evoke the ancient Egyptian landscapes of Keiko Takemiya's manga "Pharaoh's Tomb"

I do not know if there are any translations of Pharaoh's Tomb that have ever been published, but it seems to have been quite popular in Japan with several editions, the latest tankobon collecting it being published by Square Enix. I have definitely seen a radio play version of it at some point (though I can't find it anymore), and apparently last year, a televised musical adaptation involving Morning Musume was broadcast. Takemiya herself is one of the pillars of shojo manga, creating what is probably one of the very first yaoi manga that was publicly and commercially avaialble, Kaze to Ki no Uta (Poem of the Wind and the Trees), among many other works that I don't really have the expertise nor the space to discuss here; she is now the president of Kyoto Seika University, one of the pre-eminent manga schools. So - this album is released well after both Pharaoh's Tomb (74-76) and in the middle of Kaze to Ki no Uta's run, at the height of her popularity. (There is also a Kaze to Ki no Uta image album for Digital Trip, but I haven't been able to get my hands on that one yet. Future post, maybe!) Given Kamiya's previous work with MU, it was a natural choice for him to do the image album. 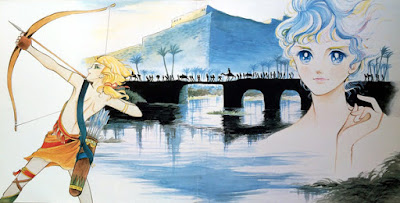 If you liked MU, then you will like this one just as much if not moreso depending on how much you enjoyed the more experimental sections, as this record is far more melodic. Kamiya expertly uses the full range of the ARP 2500 System to produce otherworldly sounds that, nevertheless, fit the Egyptian theme perfectly. This is the type of record where you can just submerge into the atmosphere of the work and be transported to a far-off land. Unfortunately I haven't been able to find even an untranslated copy of the manga as yet, so I can't speak to how well it matches the atmosphere of the work; that said, I'd be surprised if Kamiya didn't nail it on the head given how good he is at creating this sort of sound. The last track on Side A,  ("Muera's Dance", I believe this is the name of a tribe in the manga if I'm parsing this article correctly), is to me the peak of the record, a deep pulsing groove that, despite its high-tech origins, takes you off to ancient lands...

Liner Notes
Below are the full, translated liner notes, which contain both some details on the production of Farao no Haka itself, and a little more detail on Kamiya than was provided in the MU liner notes. Once again, thanks to megchan for the translation!

Long, detailed liner notes in Japanese, flanked by two paintings. On the left, the pharaoh stands in a courtyard flanked by high columns, and a woman also dressed in royal garb sits on the wall above him, which leads to either a palace or a tomb. On the right, a young boy with royal headdress faces off against an older man, with the night sky over the Pyramids behind them; images of their ancestors' sarcophagi floating between them. 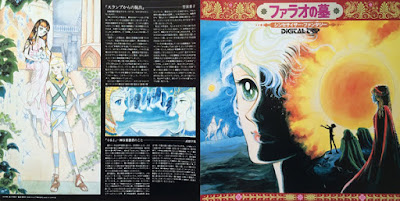 "Getting Out of the Slump" - Takemiya Keiko
The circumstances surrounding the birth of a long-running series are always interesting.

With "Kaze to Ki no Uta", I had the first fity pages or so ready to go when I shopped it around to publishers, but everyone said it was too shocking and I kept getting rejected. Recently one of those publishers told me, "If I hadn't turned you down that time, you'd be running in our magazine right now," and I had no idea how to respond.

With "Chikyuu e...", I started off with a promise of only three chapters. When the announcement was first published, there were objections, things like "Don't run a female author in a shounen magazine." But there were hundreds of positive letters along the lines of "I'm so happy you're writing hard SF" that those silly objections didn't bother me at all. The editorial department was shocked to receive so many letters from an announcement, and just from that the series length was expanded.

Right before I started "Pharaoh no Haka", I found myself in a slump and spent my days fretting over what to write next. One day my editor stopped by and was flipping through my sketchbook when he found a shounen-esque story and said, "This is great. Let's go with this." And so suddenly I found myself serialized again.

It started out as a type of fantasy romance, so the setting was originally an imaginary country and the title was "Koutei no Haka" ("The Emperor's Tomb"). When the setting was changed to Egypt, I was sweating at the thought of all the research I would have to do. I feel a wave of nostalgia at the memory of the editorial department telling me things like "You shouldn't use an ominous word like tomb."

I made up my mind to use this series as a way of getting out of my slump. Determined to make it appealing to both kids and grown-ups, I plunged ahead through trial and error and was extremely pleased with myself when I finally began to see how it would end when I'd reached what I thought was the midpoint of the series.

I was lucky that my editor for "Pharaoh no Haka", M, had just transferred from Shounen Sunday. He was able to look at it with a shounen manga eye and tell me things like "This is a bit hard to follow" and "You're breaking out of the panels too much" (one of the characteristics of shoujo manga is how the drawings extend outside the panels), and it was really refreshing to have that sort of criticism when I was taking my first steps. And it always made me happy to get a "Good job" from him when I managed something shounen-esque.

Having been raised on "Tetsuwan Atom", "Iga no Kagemaru", and "Cyborg 009", I really enjoy this sort of hero's romance. Once I realized that, I was finally able to get out of that slump. Now I feel like I could write a second or even third "Pharaoh no Haka".

"0&1" Regarding Kamiya Shigenori - Takebe Moriaki
His first synthesizer was an ARP2600. It was 1972. He picked it up out of a simple love of mechanics, and after taking it apart in his room and then putting it back together again, he discovered it to be the perfect instrument for him. He said that if his first encounter with a synthesizer had been the Moog III, which Walter Carlos popularized with "Switched-On Bach", he wouldn't have become a synth player. Although he had studied science and engineering, he was a novice when it came to anything electrical, but being able to change things around to produce his own sound must have been what caused him to switch from guitar to soldering irons and keyboards.

His music was fostered through sixteen years of chapel at Aoyama Academy. He still believes that the Hallelujah Chorus is the pinnacle of melody and harmony. It seems that this ancient civilization series, made up of his 1979 solo album "Mu" and now "Pharaoh", is not totally unrelated to the "brush with death" he encountered on the circuit. (After placing 6th in the 1966 Japan Grand Prix, he had a terrible accident while rehearsing.) The fact he got into computer programming after picking up the synth cannot possibly be unrelated either. (He has created over 10,000 programs, for use in console games, for synthesizers, and even for industrial and broadcasting use. This rivals the number of programs a software company would have.) The church music he was surrounded by from a young age, the physical prowess of a racer, and the most complicated mechanism of our time: the computer. Within him, these three things become one to create his music, but it is no coincidence that each of these things can be traced back to the lost civilizations of the past. The ones and zeroes of computer language are like the "existence" and "non-existence" of ancient civilizations, and are expressed in his music as "god and man". From a layman's perspective, his music is cheerful with an undercurrent of sweet sentimentality. In the newly renovated Kamiya Studios, computers and synthesizers share space with the sculptures carved by his grandfather (Yokoe Yoshizumi). One could say that the same multi-dimensional harmony of his studio flows through his music as well.