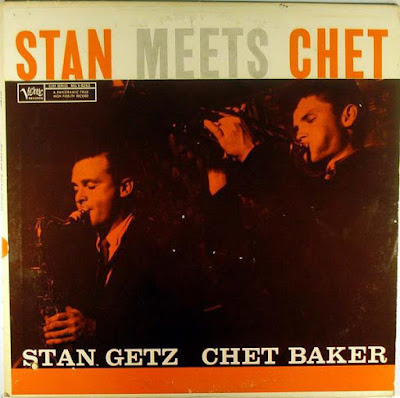 
Stan Getz is cool: he sounds like he is playing the tenor with one hand while rolling a cigarette with the other. He is so cool that when the notes come out of his horn they are wearing shades. Trouble is, I'm unsure whether this is a good thing or not. Getz was one of the first jazz musicians I ever heard of but although I read that he was one of the greats I've never found the evidence (which doesn't mean it's not out there): no one could doubt his technical command of the instrument, and although I'm not saying all tenor players have to be intense in a Coltrane way, Getz seems so relaxed I'm uncertain he would get out of bed to open the door to a new idea. And so it is on this album. Listen to Jordu, I can't think of one thing to say against his playing.

Tenor saxophonist Stan Getz and trumpeter Chet Baker never particularly liked each other and, even though they had musically compatible styles, they only worked together briefly in three periods. Their mutual hostility can be felt in subtle ways on this session which has been reissued on CD. Getz ignores Baker's attempt to state the melody of "I'll Remember April" and he plays it himself several bars after. The two horns do not meet at all on the ballad medley and, since Baker sits out on "Jordu," they only play together on two of the four performances. Getz battles a squeaky reed on "I'll Remember April" and Baker seems a bit subpar in general although he really digs in on "Half-Breed Apache" (a very fast "Cherokee"). So overall this CD (which also includes pianist Jodie Christian, bassist Victor Sproles, and drummer Marshall Thompson), even with some good moments, does not live up to its potential.